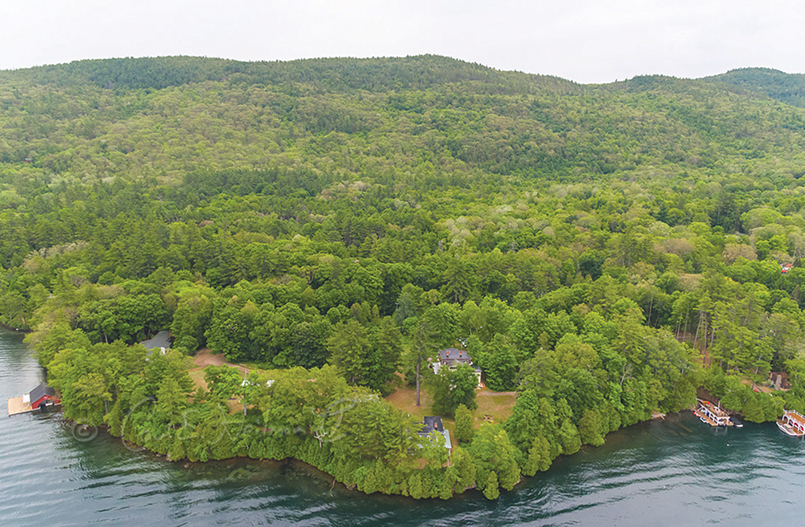 The Lake George Land Conservancy aims to raise $850,000 to permanently protect 47 acres overlooking the Wiawaka Center for Women, which will retain title to the property.

Mike Horn, the Conservancy’s executive director, said the largest part of that sum will pay for a conservation easement across the property, allowing it to be used for passive recreation while protecting it from development.

The funds will also pay the transaction’s legal fees, for a sustainable trail system and a public parking area with a kiosk and interpretive materials, and for the costs of ongoing stewardship and maintenance, said Horn.

The Lake George Land Conservancy and the Wiawaka Center for Women announced the organizations’ land protection partnership at Wiawaka on June 24.

“The Lake George Land Conservancy will ensure the land’s permanent protection and assist with its stewardship, while, at the same time, assisting Wiawaka to remain viable and sustainable for generations to come,” Doreen Kelly, Wiawaka’s executive director, said at the time.

“Our collaboration with Wiawaka will strengthen the mission of both organizations,” HasBrouck said at the LGLC’s annual meeting at Up Yonda Farm on August 20, noting that the sale of the easement will support Wiawaka’s operations. “We can help Wiawaka continue their mission. Wiawaka can help us continue our mission. We will both be stronger and better through this collaboration. This is a win not only for both organizations, but for the community.”

Situated within a five-minute drive of Lake George Village and the thousands of tourists who visit every week, the new trailhead will introduce the Lake George Land Conservancy to a new audience, said Monica Dore, the conservation project manager for the LGLC.

“Wiawaka did not want to sell the property and it has kept the land from being developed,” said Dickinson. “I think offering a conservation easement to the Lake George Land Conservancy is a great idea. The land deserves to be protected.”

According to Paul Bell, a member of the Lake George Land Conservancy’s Board of Directors and Chair of its Conservation Committee, the 47 acres were subjected to critical, scientific scrutiny before the LGLC’s board agreed to protect them.

“The Conservancy is not anti-development, but, rather, a responsible party in property protection, protecting land, which, if it were developed, could cause harm to the lake and the surrounding watershed,” Bell said at the organization’s August 20 annual meeting.

The 47-acre property is zoned for dense commercial and residential development.

“A high threat of development is an impetus for us to act to save a significant property, and what constitutes a threat has changed over the past 2 ½ years,” said Monica Dore. “More people are moving into the area. People are really excited to have a spot on the lake. The real estate market has changed.”

An adjacent property has already been subdivided into a sixteen-lot development named “Mountains Edge at Lake George,” where construction is already underway.

“More impervious surfaces, whether it be a roof or a driveway, anything that disturbs the terrain, has the potential to degrade water quality,” said Bell. “I think the Wiawaka folks were concerned about this as much as we were.”

“While we’re not anti-development, some lands serve a larger purpose when left undeveloped,” said Mike Horn, who said this parcel’s attributes, which include wildlife habitat, forest cover, fragile soils, steep slopes, five acres of wetlands and a quarter mile of stream corridor, contributed to its ecological value and made it worth protecting,

“When you balance water quality protection and recreational opportunities against more development, this is a place that really deserves to be protected.,” said Horn.

“This is a huge project that will require significant fundraising if we are to meet our goals,” said Patty Hasbrouck. “We hope to engage the larger community in this effort for us.”

HasBrouck said the Wiawaka Uplands protection project is important not only for itself but for what it represents: collaboration.

“I believe in the legacies of both organizations,” said HasBrouck. “This is a huge opportunity for both organizations to help keep Lake George the place that drew us here in the first place – a place of natural beauty, of spiritual restoration. Both organizations work toward the same end. That’s why I’m excited to be part of this project.”