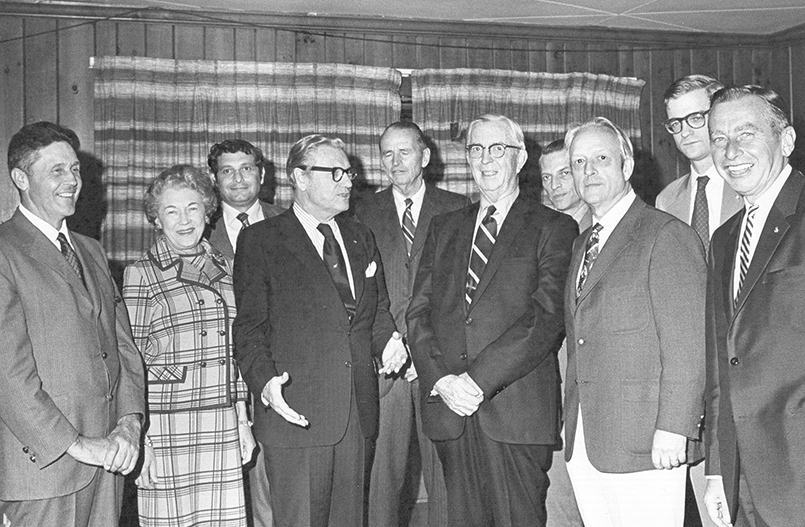 Senator Ron Stafford, the Plattsburgh Republican who dominated North Country politics for more than forty years, was among the legislators who opposed the creation of the Adirondack Park Agency in 1971.

A bill he sponsored in 1977 to abolish the new agency actually passed the State Senate. In 1991, when asked to comment on the 20th anniversary of the APA, a spokesman responded, “The senator would see no reason to celebrate; he continues to believe the agency should be abolished.”

Stafford came closer to achieving his goal than anyone outside the state Capitol realized, until now.

In a new book, “Inside the Green Lobby,” a lawyer once employed by the Adirondack Council reveals for the first time that in exchange for abolishing the APA and delegating its functions to the Department of Environmental Conservation, Stafford agreed to

support Governor Mario Cuomo’s 1991 legislation restricting development in the backcountry and along waterfronts.

At the last minute, Harold Jerry, a founder of the Adirondack Council and perhaps its most influential director, begged Stafford to withdraw his offer.

A lifelong friend of Jerry’s – their opposing views on the preservation of the Adirondacks notwithstanding – Stafford “made the reluctant decision to kill the deal for his friend,” Bernard Melewski writes in “Inside the Green Lobby.”

According to Milewski, Jerry told the Adirondack Council’s board that “the deal was a bad one and we were better off with the status quo.”

Tom Grant, Stafford’s Legislative aide at the time, has a less selfless explanation.

Jerry directed the staff of Governor Nelson Rockefeller’s 1970s Temporary Study Commission on the Future of the Adirondack (whose most important recommendation was to create the APA) and he credited himself with giving the new regional planning board its name.

“He loved that name,” says Grant.

When Tim Burke, the Adirondack Council’s director, learned what Jerry’s interference had caused, “he was furious,” writes Melewski. “Our collective judgement was that such a change merely represented form over substance, since the regulatory powers of the Agency would be unchanged, but the realignment would provide the necessary political image of a win for the senator.”

Despite the fact it collapsed, Melewski’s account of the deal he negotiated with Stafford and his aides exemplifies some of the lessons he learned during his career as “a green lobbyists,” lessons which he tried to impart by writing this book.

“The key to persuading legislators to move a bill is getting them see your objective as something that’s in their best interest, politically or professionally,” Melewski said in a recent interview. “Then, through compromise, you move toward your goal.”

Melewski’s appreciation of Senate Majority Leader Ralph Marino’s political vulnerability and his hopes for re-election led directly, or at least obliquely, to the creation of the Environmental Protection Fund, according to “Inside the Green Lobby.”

By 1991, Stafford was said to have “a veto power” over any legislation affecting the Adirondacks, and his

opposition to more state land acquisition in the Park killed an Environmental Protection Fund bill in 1992.

But pressured by Marino – who was promised credit for “saving the Adirondacks” by the Adirondack Council – as well as a delegation of Marino’s fellow Long Island state senators anxious to protect endangered pine barrens, Stafford agreed to support the legislation the following year.

Up until the final hours of the 1993 legislative session, though, Stafford remained opposed, giving in only after certain concessions were made. Among them: local governments should be given the power to veto the acquisitions of certain lands within their boundaries, and properties would have to have been identified on an Open Space Plan. The concessions were granted, and Stafford dropped his opposition.

Cuomo signed the bill, creating the Environmental Protection Fund in Essex, at Split Rock, one of the properties whose protection was made possible by the creation of the Fund.

Stafford spoke at the signing, quoting a line from the Latin poet Ovid: “Medio tutissimus ibis,” or, the middle way is the best way.