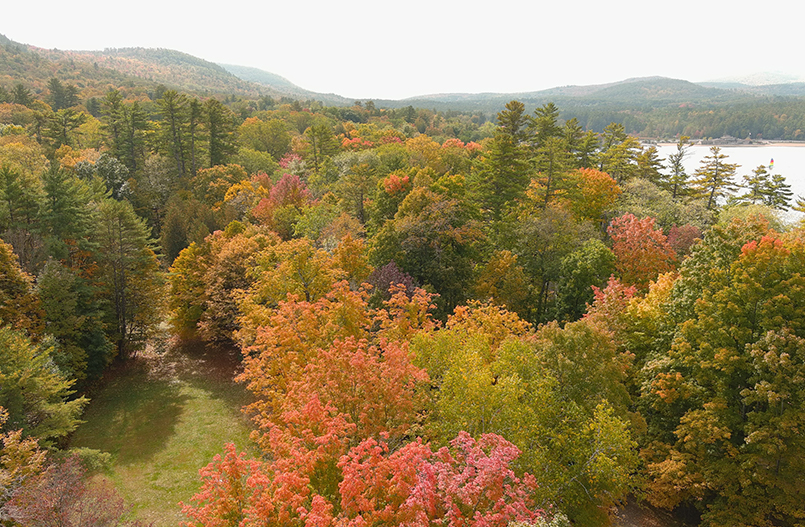 The Lake George Land Conservancy has been awarded a $350,000 grant to defray the costs of a conservation easement across 47 wooded  acres overlooking the Wiawaka Center for Women, which will retain title to the property.

The grant, which will be more than matched by the funds the Conservancy will raise to secure the $850,000 easement, is among the first to be awarded through a new partnership between New York’s Departmnent of Environmental Conservation and the Land Trust Alliance that will increase the amount of privately-owned lands under forest cover across the state.

The partnership’s $1.35 million in new grants, shared by the Lake George Land Conservancy (LGLC) with three other accredited land trusts, was announced at Wiawaka on October 7.

According to Katie Petronis, the DEC’s Deputy Commissioner for Natural Resources, the Lake George Land Conservancy’s collaboration with the Wiawaka Center for Women is especially noteworthy, not only for itself, but for what it represents.

Explaining why Wiawaka was selected as the site to announce the $1.35 million in new grants, Petronis said,  “It’s an incredible example of the work that the new Forest Conservation Easements for Land Trusts Grant Program (FCELT)  is doing,”

Petronis added,  “FCELT is is working with landowners who care about the land and want to protect its resources, and a land trust like the Lake George Land Conservancy is uniquely qualified to work with such landowners.”

Doreen Kelly, the executive director of Wiawaka, said on October 7 that the funds Wiawaka will receive in exchange for the conservation easement will help insure that the retreat’s lakefront remains undeveloped.

“We will be able to maintain this property for years to come,” she said.

The funds will also pay for a sustainable trail system and a public parking area with  kiosk and interpretive materials, and for costs associated with stewardship and maintenance, said Kelly.

“Wiawaka did not want to sell the property and now it has kept the land from being developed,” said Dickinson.

“We’re excited that these acres will be set aside and remain undeveloped. Offering a conservation easement to the Lake George Land Conservancy was a great idea,” said Dickinson.

According to Mike Horn, protecting the land from development provides benefits to a community beyond recreation and improved water quality.

“Keeping this type of forested land out of development is critical to protecting this entire, sub-watershed area, including the built environment on the lake,” Horn said.

According to the U.S. Department of Agriculture, New York lost 1% of its forests in the years 2012-2017; the first time since the early 1900s that New York has experienced a net loss of forests lands.

So it is not surprising that the state’s Forest Action Plan, adopted in 2020, recommends measures to reverse that trend, driven largely by suburban sprawl and the encroachment of invasive plants and animals.

According to to Katie Petronis, the new FCELT grant program “is part of the statewide forest protection solution.”

Petronis said the program will help New York address the threats to forests identified in the Forest Action Plan and help it achieve goals outlined in the state’s Climate Leadership and Community Protection Act, the legislation that commits the state to taking its greenhouse gas emissions down 85% from 1990 levels by 2050. To achieve that goal, New York will need its forests for carbon sequestration.

“With this grants program, we are trying to help private landowners, whose 13.62 million acres represent 74 percent of New York’s forests,  to maintain their forests,” said Petronis. “This effort requires grants that are larger in scope and scale than the many we award every year through another partnership with the Land Trust Alliance, the New York State Conservation Partnership Program.”

Forests (as well as grasslands and other types of undeveloped terrain) can absorb as much 15 to  30% of our carbon emissions, a point emphasized by the  Forest Action Plan, which notes that the net amount of carbon dioxide absorbed by New York’s forests has been decreasing steadily in recent decades.

Among the other grants announced at Wiawaka on October 7: $350,000 to the Scenic Hudson Land Trust to purchase a conservation easement across Steepletop, once the home of poet Edna St. Vincent Millay; and $294,640 to Washington County’s Agricultural Stewardship Association to purchase a conservation easement across 262 acres near the Mount Tom State Forest in Hoosick Falls.

The decision by state officials to announce the grants at Wiawaka “was fantastic for the community,” said Mike Horn.

“The presence of New York State and Land Trust officials helped shine a light on Lake George and on the good work that Wiawaka does,” said Mike Horn.

The grant of $350,000, building upon a $25,000 grant awarded earlier this year by the Nature Conservancy’s Resilient and Connected Network funding program “gets us well on the road to raising the necessary funds to do this important project,” said Horn.

At the Lake George Land Conservancy’s annual meeting, held August 20 at Up Yonda Farm, the organization announced that Patty HasBrouck, Vice President of Development, will lead the LGLC’s fundraising effort.

“This is a huge project that will require significan fundraising if we are to meet our goals,” HasBrouck said. “We hope to engage the larger community in this effort for us.”

Situated within a five minute drive of Lake George Village and the thousands of tourists who visit every week, the new trailhead at Wiawaka will introduce the Lake George Land Conservancy to a new audience, said Monica Dore, the conservation project manager for the LGLC.

According to Paul Bell, a member of the Lake George Land Conservancy’s Board of Directors and Chair of its Conservation Committee, the 47 acres were subjected to  critical, scientific scrutiny before the LGLC’s board agreed to protect them.

“The Conservancy is not anti-development, but, rather,  a responsible party in property protection, protecting land, which, if it were developed, could cause harm to the lake and the surrounding watershed,” Bell said at the organization’s August 20 annual meeting.

The 47 acre property is zoned for dense commercial and residential development.

“A high threat of development is an impetus for us to act to save a significant property, and what constitutes a threat has changed over the past two nd a half years,” said Monica Dore. “More people are moving into the area. People are really excited to have a spot on the lake. The real estate market has changed.”

An adjacent property has already been subdivided into a sixteen lot development named “Mountains Edge at Lake George,” where construction is already underway.

“More impervious surfaces, whether it be a roof or a driveway,  anything that disturbs the terrain, has the potential to degrade  water quality,” said Bell. “I think the Wiawka folks were concerned about this as much as we were.”

“While we’re not anti-development, some lands serve a larger purpose when left undeveloped,” said Mike Horn, who explained that this parcel’s attributes, which include wildlife habitat, forest cover, fragile soils, steep slopes,  five acres of wetlands and a quarter mile of stream corridor, contributed to its eclogical value and made it worth protecting,

“When you balance water quality protection and recreational opportunities  against more development, this is a place that really deserves to be protected,” said Horn.