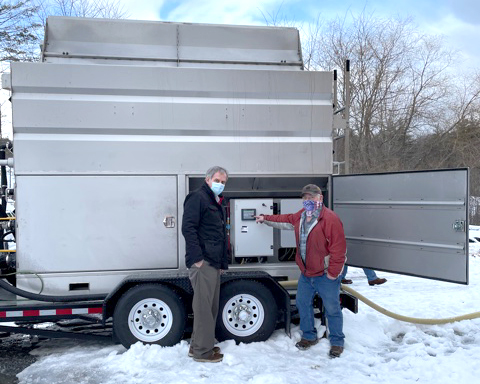 But when the watershed’s source of brine, a manufacturer called StreetTreet, was acquired by another company and deliveries to Warren County and its municipalities were disrupted in 2019, local officials, as well as environmental leaders, feared the progress that had been made within the past few years would be reversed.

Wick said StreetTreet’s new owner, Apalachee Salt, resumed the production and delivery of brine in early 2020 at a previously agreed-upon price of 25 cents per gallon.

Nevertheless, in order to ensure access to reliable sources of brine, Wick began to explore the possibility of creating “a regional road brining collaborative,” one manufacturing enough brine to supply municipal Highway Departments throughout the Lake George watershed.

An industrial-sized mixer that would produce a consistent and affordable supply of brine for the area might be eligible for state grants, said Wick, who  discussed that possibility with Kevin Hajos of the Warren County Department of Public Works and Chris Belden of the county’s Planning Department.

With the approval of the Warren County Board of Supervisors, Hajos’ department decided to acquire its own equipment, enabling it to manufacture brine for the county’s highway crews, as well as for the towns’ highway superintendents.

A $29,000 grant from The Fund for Lake George went toward the purchase of a stationary brine-making unit  for the county’s use, which has been installed at its DPW garage in Warrensburg.

And with a $72,000 grant secured by Chris Belden, Wick began shopping for mobile, industrial-grade brine-making apparatus for municipalities.

Wick said the county would retain ownership of the equipment but any municipality could borrow it.

“They would pick up the unit, bring it to their site, load the hopper, push a button and fill up their brine tanks,” he said.

“Such machines can produce 3,000 gallons per hour,” he said.

But even with the $72,000 grant, more funds were necessary if the machinery was to be purchased.

Wick said he “reached out to highway superintendents and town supervisors to find out who might be interested in making their own brine at a cost of about six cents per gallon, versus the 35 to 45 cents per gallon it might cost if we were to continue to purchase it from a private source.”

Contributions of $5,000 each were secured from the Towns of  Bolton, Queensbury, Ticonderoga, Putnam and Dresden; Washington County invested $10,000.

A Memorandum of Understanding adopted by the Warren County Board of Supervisors in 2020 formalized the agreement between the county and the other governmental units utilizing its equipment.

The Town and Village of Lake George make brine in the Town’s highway garage, using equipment acquired from the unit’s manufacturer by The Fund for Lake George.

Hague has also purchased its own unit, aided by a $29,000 grant from The Fund for Lake George.

According to Waterkeeper Chris Navitsky, Hague’s unit was installed in early autumn and has brewed roughly 20,000 gallons since then.

Warren County has also started manufacturing brine, and on December 7,  the Department of Public Works hosted a demonstration of the mobile unit’s capabilities at  its Queensbury facility for the towns’ highway superintendents.

“Being able to assist others in making brine will not only help the environment by protecting our waterways and wells for generations to come, but allow each of the participating municipalities to reduce the amount of funding needed in their budgets by limiting the amount of salt they use, while still maintaining public safety,” Hajos said. “What could be better than saving money and protecting the environment?”

“The more we learn about the impacts of road salt on the Lake George watershed, the more motivated we are to achieve road salt reductions in the earliest possible time frame,” said Navitsky.