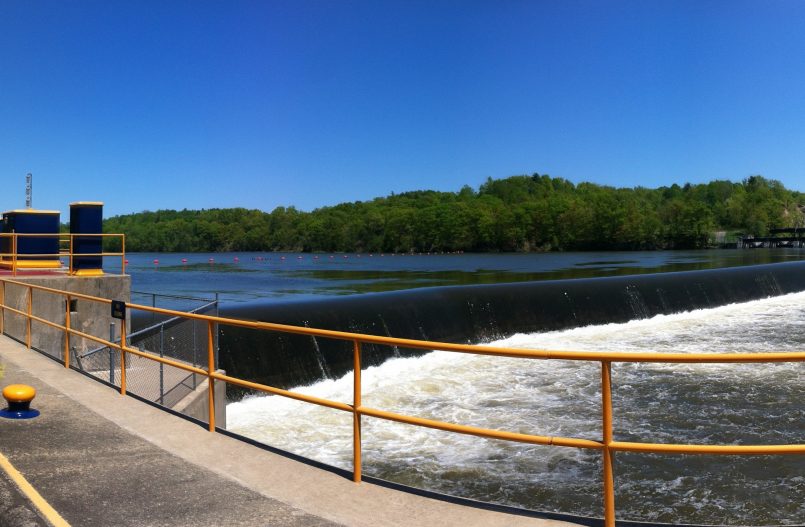 Governor Andrew Cuomo announced plans for the trail in January, 2017; an official, grand opening is scheduled for December 31.

“We now have expanded options for outdoor recreation,”

said Empire State Trail director Andy Beer, noting that the opening was taking place in the midst of a pandemic.

“Although the current circumstances we are all facing during this pandemic are difficult, we are New York tough,” he said.

Planning expert and Lake George resident Tracey Clothier said a twelve-mile section of the Empire State Trail is accessible from Lake George via the Warren County Bikeway and the Feeder Canal Trail.

“You can ride from Lake George, do the Feeder Canal Trail and go right up north along the Champlain Canal,” said Clothier, whose planning practice specializes in creating inter-municipal recreational corridors. “We’re trying to connect all these big corridor pieces. The Empire State Trail will be huge.”

The trail between Fort Edward and Fort Anne is one piece of the Champlain Canalway Trail, which follows the old Champlain Canal between Waterford and Whitehall. \While maintaining its own branded identity, the trail has largely been incorporated within the Empire State Trail, said Clothier, who was retained by communities along the canal to help create the trail and connect their individual attractions.

According to Clothier, the 60-mile Champlain Canalway Trail is expected to attract 430,000 visitors per year, consisting of an estimated 150,000 cyclists and 280,000 pedestrians.

Individual sections of the Canalway Trail such as Fort Edward to Kingsbury, and Kingsbury to Fort Anne, are expected to have up to 70,000 users per year.

“Once people know about this Champlain Canalway Trail and the Empire State Trail, they’re going to flock to them because they’re really geared for biking,” said Clothier,

The Empire State Trail, in other words, will not only provide new recreational opportunities for Lake George residents and visitors, it will bring more outdoors-oriented tourists to Lake George, Clothier said,

“Instead of going to Great Escape and saying, ‘Okay let’s take a little bike ride, too,’ you’re going to come here for the trails,” Clothier said. “That’s what the Empire State Trail is designed to do, promote sustainable economic development.”

A cycling group, for instance, could use Lake George as a base, taking day trips up and down the Canalway Trail.

“Even a side trip from the Champlain Canalway Trail to Lake George for an ice cream cone could be a phenomenal experience; we’d like to market these side trails as well,” she said.

With proper marketing, the region’s vast network of routes, including the First Heritage Wilderness Corridor Trail from Corinth to Tahawus, the projected “Long, Long” Hudson River from the Battery to the sources of the Hudson or the Adirondack Hamlets to Huts trail could make the Lake George region a prominent cycling destination, she said.

“Governor Cuomo sees the synergy between outdoor recreation and the craft beverage industry, both of which our Chamber promotes. New York supports all kinds of economic development, and there’s a thread running through many of these initiatives. That thread is sustainable tourism,” said Mintzer.