Unprecedented Collaboration Assembled to “Save Our Hemlocks”

Search for Hemlock Wooly Adelgid Expands to Include Entire Watershed 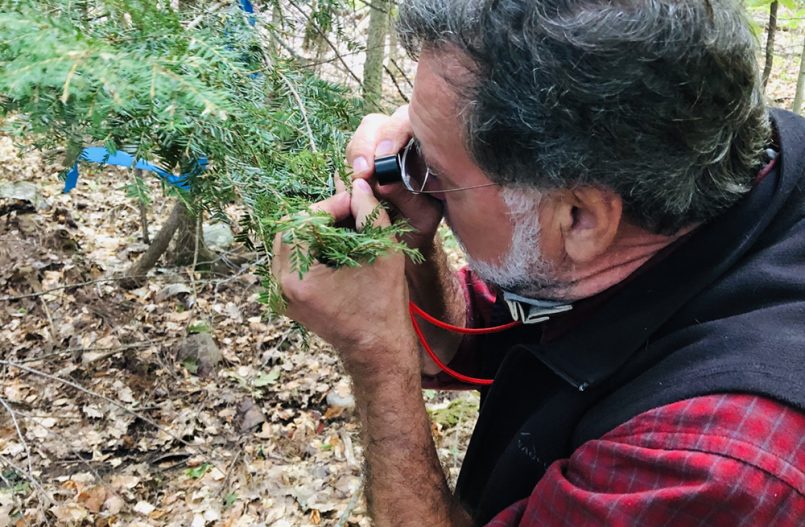 A team of four technicians will survey Lake George’s forests every day for the next four weeks, searching for signs of Hemlock Wooly Adelgid (HWA).

Brown said the technicians will work under the direction of the Adirondack Park Invasive Plant Program (APIPP).

State and local experts on invasive forest pests hope the HWA infestation detected in July will be found to be a limited one, confined to an area from Red Rock Bay to Black Mountain Point on the lake’s east shore.

“The ground crew will inspect sites deemed vulnerable and of high priority – dense hemlock stands, hemlocks near the lake and along the tributaries and those in the vicinity of the one known infestation,” said Tammara Van Ryn, APIPP’s executive director. “We’ll want as complete a survey as possible, in order to allocate resources effectively and to determine if the current treatment and containment plans require amending.”

The Adirondack Research team will be supplemented by survey crews from APIPP, the Lake George Land Conservancy and possibly others, said Van Ryn.

The Lake George Land Conservancy will continue to survey its own preserves, in addition to supporting Adirondack Research’s team, said Jamie Brown.

The Power of Partnership

“We’re one of many partners,” said Jamie Brown.

“As in any true partnership effort, no one entity is in charge, but every group is making its contribution,” said Tammara Van Ryn.

Rob Davies, the Department of Environmental Conservation’s Director of Lands and Forests, said the many partners “came together very rapidly.”

For its part, “the DEC is now ready to start treating the infestation found on the lake’s east shore,” said Davies.

“The goal is to knock the Hemlock Woolly Adelgid population down this year as much as possible,” he said.

The Fund for Lake George has contributed $75,000 toward the collaborative effort, which includes a pilot project to determine if remote sensing technology can be used to detect an HWA infestation in its early stages.

“The situation demands comprehensive integrated action now, starting with limitation and control; the immediate next step, however, is determining the extent of the infestation,” said  Eric Siy, the Fund’s executive director, who helped assemble a consortium of agencies and organizations under the name “Save Our Lake George Hemlocks Initiative” to limit the spread of HWA.

“We are confident that we can eliminate this infestation, but it is going to take every tool in the toolbox, and that’s why we rely on these partners,” said the DEC’s Davies.

Crews from the New York State Hemlock Initiative will be deployed near the shoreline campsite where Hemlock Wooly Adelgid was detected in July, said Dr. Mark Whitmore, who established the Hemlock Initiative at Cornell University with the goal of conserving the state’s hemlock forests.

The technicians will collect data in order to determine the extent and intensity of the infestation within the 250-acre zone, said Whitmore.

Whitmore said the first tree in the area to be attacked by HWA, was, in all likelihood, one that grows on the shore of Paradise Bay.  Its lower, thinning branches above the water display the effects of HWA.

“I was looking at a stand of hemlocks on the edge of Paradise Bay during our initial survey and my jaw dropped. That was one, heavily infested tree,” said Whitmore.

From the Water’s Edge

According to Whitmore, HWA infestations tend to begin at the water’s edge, in trees where the insect may have been deposited by a bird.

“When a bird alights on a hemlock twig in spring, a Hemlock Woolly Adelgid, less than a quarter of a millimeter in size, will crawl onto its legs and be carried to the next plant,” said Whitmore.

Wind will then transport the insects to nearby trees, further infesting a forest, said Whitmore.

Whitmore said he will bring crews from Cornell to climb the high, old growth trees to inspect the canopies for HWA.

Another technician will establish traps to catch rain water falling from the canopies, which will be analyzed for the presence of the insect’s DNA.

According to Whitmore, insecticides will be applied to the largest trees within the 250-acre zone.

“A bigger tree is more likely to have HWA in its canopy, from which it can be blown by the wind to other trees across considerable distances. So if you can’t treat every tree at once, you treat the larger trees first,” said Whitmore.

“Even though we’ve found HWA on a relatively few number of trees, out of prudence, I work on the assumption that all the trees in the zone are infested,” said Whitmore. “But the US Environmental Protection Agency limits the amount of pesticide that we can apply, so we have to identify our priorities.”

The DEC will send five crews, composed of three people each, into the forest next week to apply the insecticides, said Rob Davies.

Two different insecticides, one fast-acting, killing the insect before it can reproduce, the other affording the tree long-term protection, will be applied to bark near the base of the tree and absorbed through its tissue.

When HWA attaches itself to the tree to feed, it receives a dose of the pesticide and is killed.

Natural Predators to be Released on Lake George

Among other things, the New York Hemlock Initiative is developing biological controls, or natural predators, to suppress HWA populations and ensure the survival of eastern hemlock populations.

(On September 25, the DEC announced that New York’s Environmental Protection Fund will allocate $1 million over the next two years to the New York Hemlock Initiative to support the growth and release of biological control agents, as well as surveys, research and analyses.)

Whitmore said predators will be released in the Lake George region within the next few weeks.

“Creating an effective, biological control program is not a simple process and will take years but we are moving as fast as possible,” said Whitmore.

Utilizing pesticides and natural predators are both parts of “a comprehensive plan” to contain the spread of HWA, said Rob Davies.

On September 22, The Fund for Lake George’s Eric Siy announced that his organization would help defray the costs of a pilot project to deploy remote sensing technology to help contain the spread of HWA.

Siy said the pilot project can be “scaled up” to survey the Adirondack Park and, in theory, the entire state.

“Remote sensing technology is a tool that we currently lack,” said APIPP’s Tammara Van Ryn. “It is not possible to survey the entire six million acre Adirondack Park for HWA from the ground. What satellite imagery may eventually provide us with is intelligence. It should be able to tell us if trees are unhealthy.  That would be enough to alert people directing ground surveys to send crews to those locations for closer inspections.”

“What we learn now about the technology will lay the foundation for the use of these tools to combat HWA on a larger scale,” said Siy. “This is a marathon, not a sprint.”