Before it was a Smithsonian Exhibit, America’s Oldest Surviving Warship was a Local Roadside Attraction 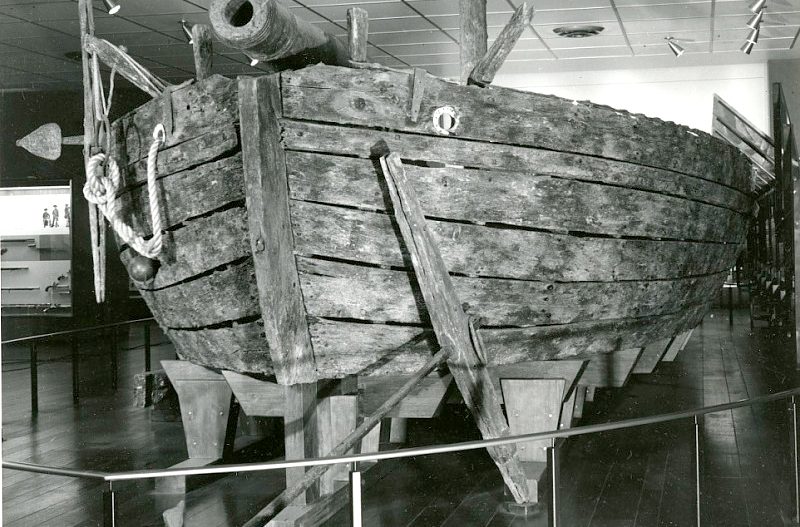 In 2026, the US will celebrate the 250th anniversary of the Declaration of Independence. That year, the Smithsonian Institution’s Museum of American History will unveil a new display interpreting the 54-foot 1776 gunboat Philadelphia, built for Benedict Arnold at Whitehall and the oldest surviving ship of the US Navy.

When it was reported in the summer of 1935 that the wreck of the Revolutionary War vessel had been discovered at the bottom of Lake Champlain, most newspaper accounts included some information about the October, 1776 battle in which she was lost – the Battle of Valcour –and how Benedict Arnold, in command of the remains of the New American Navy, eluded the British fleet and sailed up Lake Champlain toward Fort Ticonderoga. To quote from one article, “Oars muffled with greased rags, his men rowed between blockading British vessels.”

Once the British realized that the American flotilla had escaped, Arnold was pursued up the lake. Of the fifteen ships Arnold had at the start of the Battle of Valcour, only a few reached Crown Point safely. Historians agree that the battle was an element in Britain’s decision to postpone the invasion of New York for a year, just enough time, perhaps, for the Americans to assemble the political and military strength that defeated General Burgoyne at Saratoga.

Among those who will be cheered by the news that the Philadelphia is the object of renewed interest is Richard Clair, a reader from New Jersey.

I was sitting at my desk last Friday when Mr. Clair called, wondering if we still had copies of a pamphlet printed by Adirondack Resorts Press (the publisher of the Lake George Mirror) for Colonel Lorenzo Hagglund in the 1940s.

It was Col. Hagglund who was responsible for bringing the Philadelphia to the surface of Lake Champlain in 1935.

Until 1961, when the Philadelphia was donated to the Smithsonian, the gunboat (or gundelo) was displayed in the Champlain Valley, where Mr. Clair first saw her.

I asked him to write for us the story of how he accidentally stumbled upon this historically unique roadside attraction.

“On summer vacation in 1960, I took a solo driving tour through New York’s Adirondacks and the west side of Lake Champlain. North of Fort Ticonderoga, along State Route 22 through rural Essex County, short blue signs began appearing by the roadside, labeled “Gundelo Philadelphia” and with an arrow pointing the way.

Somehow knowing that a gundelo was an old type of warship, out of curiosity I followed the signs until I came to a parking area with split rail fence and a sign pointing to a weathered barn. This was in Willsboro. The barn’s front doors were open, revealing the front end of a large wooden boat sitting in the barn’s darkness. An elderly lady greeted me and invited me to come down to her farmhouse after touring the boat. But for an unfathomable reason, I decided that a walk around what appeared to be a wreck was not worth the $1 admission fee, got back in my 1958 Plymouth convertible, and drove off.  Within a few miles my head began to throb, as I felt shame for not paying the lady to at least find out what the gundelo was all about.  Turning around, I returned to the site. It was surrounded by a five-foot high platform from which one could peer inside the craft. After my eyes adjusted to the dim light, I could see it was a substantial oak-timbered vessel about 50 feet long and 15 feet wide, armed with three iron cannons. It was the sole survivor of the first United States navy, having been sunk off Valcour Island by British cannonballs in the Battle of Lake Champlain, October 11, 1776; was discovered well-preserved 60 feet down in the lake’s cold waters in July 1935 by Major L.F. Hagglund (US. Army, retired); was raised to the surface on August 9, 1935 by the Major and friends; and was now tended to by Major Hagglund’s widow.

Sitting at her kitchen table, the aging Mrs. Hagglund expressed her concern over disposition of the Gundelo Philadelphia upon her death, which she said was probably not far off, and asked if I had any suggestions.

“How about giving it to Fort Ticonderoga since their histories are inter-related?” I ventured.

Mrs. Hagglund said that Fort Ticonderoga had been her late husband’s first choice for a repository, but the Fort’s owner, John H.G. Pell, had “refused acceptance.” (I got the sense of “rivalry” here regarding objects of historical significance.)

“Why not give it to the Navy Department since this is a survivor of our first navy?” I asked.

She said her husband had tried that, too, but the Navy “was not interested.” He had also asked the Army to take it since the boat had been built by soldiers, and the Army’s response was “No, thanks.” And the City of Philadelphia, after which the boat had been named, “couldn’t handle it.” She could “not understand the lack of interest in this national treasure.”

I told Mrs. Hagglund that I agreed it was a national treasure and, as such, suggested that “it should repose with a national institution, such as the Smithsonian Institution in Washington.”  Neither she nor her husband had thought of that, and she asked, “But what if they refuse to take it?” I said that if left to the Institution, or to any other party, pursuant to a Will, the bequest could not be refused. She thanked me for spending my time with her and I went on my way, hoping I had been of some help.

Almost a year later, in July 1961, I read a small notice in The New York Times that the Gundelo Philadelphia could be seen on a barge being towed down the Hudson River, arriving about 10 am abreast of midtown Manhattan. I watched it from the 23rd  floor west window of my employer Metropolitan Life Insurance Company’s North Building, 24th Street and Madison Avenue. Its destination was the Naval Weapons Center in Washington, D.C., for transfer to the Smithsonian from the Estate of Mrs. L.F. Hagglund.

Others who are no doubt cheered by the Smithsonian’s plans to revisit the Philadelphia are Russell Bellico and Joe Zarzynski, both founders of Bateaux Below, an organization devoted to the discovery and preservation of shipwrecks, maritime archaeologists and historians.

In 1993, Russ Bellico invited Hudson Hagglund, Col. Hagglund’s son, to present a lecture at the Lake George Historical Museum about the recovery of the Philadelphia.  Joe Zarzynski wrote about the lecture for a column published in this newspaper.

This wooden warship is one of the Smithsonian Institution’s most precious artifacts, a relic of the American Revolution (1775-1783). The battered, but nearly intact American gunboat Philadelphia, raised from Lake Champlain in 1935, is a popular attraction at the national museum.

On August 5, 1993, Hudson Hagglund, told a crowd of history buffs at the Lake George Historical Association the story of how his father, Lorenzo Hagglund, found and recovered this historic shipwreck. Hague summer resident Dr. Russell P. Bellico organized the lecture, which was entitled “Raising the Shipwreck Philadelphia.”

In a recent interview, Bellico reflected upon Hudson Hagglund’s presentation.

“Lorenzo Hagglund was at the Plattsburgh army base in 1917 and heard about the Valcour shipwrecks,” observed Bellico, author of several history books including the publication—“Sails and Steam in the Mountains: A Maritime and Military History of Lake George and Lake Champlain.”

“Hagglund, a salvage engineer, returned years later and in 1934 he raised the American schooner Royal Savage,” said Bellico. “For a time the Royal Savage’s remains were stored at the Hagglund farm in Essex, New York.”

In 1935, Hagglund’s team recovered the Philadelphia, complete with the 24-pound British cannon ball embedded in the hull that sank the watercraft. For years, the antiquity was exhibited on a barge docked around Lake Champlain and the Hudson River.

“In the 1950s, Lorenzo Hagglund dived in the Narrows in Lake George searching for a British floating gun battery of the French and Indian War,” Bellico said.

In 1995, Hudson Hagglund sold the Royal Savage and it ended up with the city of Harrisburg, Pennsylvania for display in one of their museums. However, the schooner was never showcased.

Hudson Hagglund died in 2015. That year, Harrisburg officials donated the Royal Savage to the Naval History and Heritage Command, a division of the U.S. Navy. The hull structure and some artifacts are undergoing conservation treatment.

According to the Smithsonian Institution, a replica of the Philadelphia is on display at the Lake Champlain Maritime Museum in Vergennes, Vermont.

Curators at the Smithsonian recently reported that they have been sifting through three barrels of mud and pieces of broken wood scraped from the bottom of the Philadelphia when it arrived at the museum in 1964.

“This wood will help us better understand and preserve the gunboat,” said curator Paul F. Johnston. “Fifty years later, we’re discovering secrets in the muck that will help us preserve a centuries-old warship for future generations.”

In addition to 18th century forged nails and spikes, oakum used to stuff the cracks between hull planks and tar to waterproof it, musket balls, and gunflints, the curators found the skulls of stowaways—not human skulls, but those of mice, which probably date to the days when the Philadelphia was a local roadside attraction. (They also found lots of nuts.)