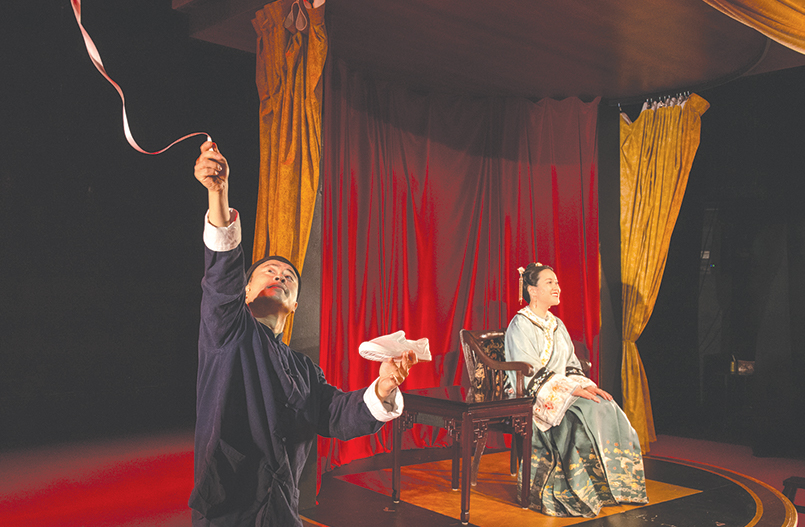 On the surface, Afong Moy, the 14-year-old girl brought from China and put on display as the first Chinese woman in America, is nothing but “the gaze” – the western gaze, the male gaze, the gaze of those who attend the theater, the carnival, the zoo.

Afong Moy recognizes that herself, stating at the beginning of “The Chinese Lady,” “This body that I occupy is not my own.”

Of course, existing solely on the surface, trapped within a gaze, being nothing but the gaze, this Afong Moy would not have had a voice, or at least not a voice of her own.

But through “The Chinese Lady,” the play that opens the 28th season of the Adirondack Theatre Festival and the first to be staged under the auspices of its new Producing Artistic Director Miriam Weisfeld, she discovers her voice, literally and figuratively.

To be precise, we hear her own, extremely perceptive thoughts, audible only in the darkened theater. When she does speak, to the historical Andrew Jackson, for instance, it is through her translator and sometimes medium, Atung.

“You do not need to know who I am or where I come from or how it came to be that I speak both languages,” says Atung, a stand-in, perhaps for the Chinese immigrants who began arriving  in the US in numbers in 1840s, but who were all but invisible until they weren’t, at which point they were persecuted and sometimes tortured.

If your thoughts turned to racial violence while watching “The Chinese Lady,” or, for that matter, to the Me-Too movement, it would not be unexpected.

Speaking to an interviewer, playwright Lloyd Suh said, “What I love about watching an audience respond to this play is seeing the very personal ways in which people react to the history behind it, or connect with Afong Moy’s experience.”

Because “The Chinese Lady” is so rich in content – political, historical and intellectual – it could, in the wrong hands, become a learned talk at the lyceum rather than an evening at the theater.

We asked Shannon Tyo, the director, how she avoided that trap.

Tyo has had ample opportunity to get to know Afong Moy.

She played the role of Afong Moy in the world premiere of “The Chinese Lady” when it was presented by the Barrington Stage Company in Pittsfield, Massachusetts in 2018 and when it moved to New York’s Public Theater in February, 2022,

The Adirondack Theatre Festival’s production of “The Chinese Lady” is her first outing as a director, and it’s an extraordinarily successful one, too.

There are no loose ends in this fast-paced, visually, sonically and intellectually coherent production, propelled by the energy and magnetism of actors Sami Ma and Whit K. Lee.

“It is asking a lot of the actors to put themselves on stage for the sake of these roles; it is glaringly obvious that you are on display,” said Tyo.

Being an actor herself, Tyo no doubt brought a highly developed awareness of Afong Moy’s performative existence to the production.

“Most of the time, when you go to the American theater, the audience is composed primarily of white Americans,” said Tyo. “As an Asian American woman, that’s obviously on my mind. As an actor, I’m asked to embody a race and a culture.”

By the time the curtain comes down, we have learned that Afong Moy knows more about us than we do about her. The observed became the attentive observer.

Shannon Tyo is in a not-so-dissimilar situation. As an actor and a director, she has taken the measure of her audiences’ expectations and preconceptions about “the Chinese lady.” These she subverts, and in the process, creates a compelling, riveting show.