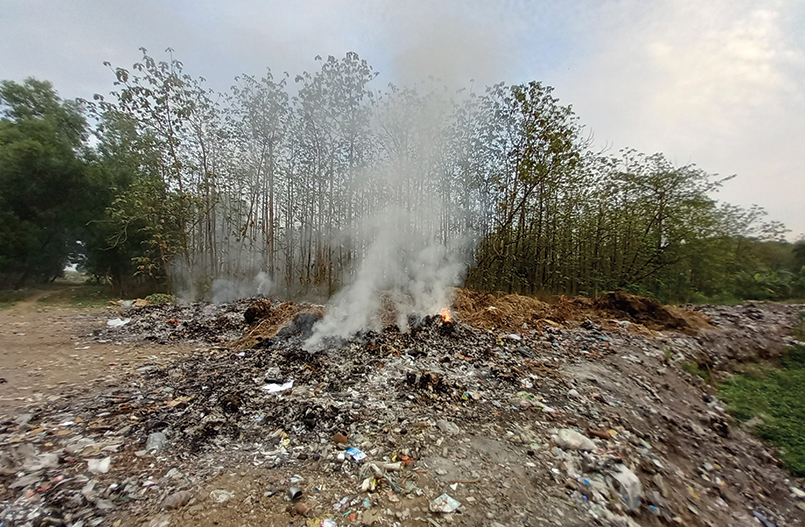 In Warren County, landfills such as the one pictured above have been replaced by transfer stations where recycling predominates. Waste hauled to larger facilities could be reduced through the use of organics management.
By Anthony F. Hall

“The total mass of plastics on earth now exceeds the total mass of all mammals,” writes former Johnsburg resident Bill McKibben, citing a new Swedish study that found that chemicals “with diverse risk potentials” now surpass our ability to accurately assess their dangers, let alone absorb them into our ecosystem.

Among the consequences: habitat destruction, loss of life and livelihoods, air and water pollution and rising temperatures.

According to the citizens group, Zero Waste Warren County, Americans recycled 32% of municipal waste in 2018, compared with 6% in 1960. But they also generated more solid waste than ever before.

Warren County cannot save the planet on its own; its officials, however, are doing their best to reduce, recycle and repurpose waste, while, at the same time, saving taxpayer dollars.

Warren County also applied for, and received, a $40,000 state grant to defray the costs of developing an Organics or “Green Waste” Management Plan that would divert compostable material such as food, brush and leaves from the waste stream.

According to Kevin Hajos, Warren County’s Superintendent of Public Works, the grant will help the county hire a consultant to develop the Organics Management Plan.

Hajos told the Public Works Committee on May 24 that its Organics Management consultant ought to be retained and the Management Plan developed before the county pursues additional state grants to build public composting facilities.

and let the management plan guide us before pursuing new initiatives,” said Hajos. “Once we have a draft plan in place, we’ll have a discussion with the Board of Supervisors about the direction in which we should be headed as it relates to organics and composting.”

As Hajos noted, New York’s 2022 organics recycling law requires upstate grocery stores, restaurants and institutional facilities to haul green waste to an industrial-sized composting facility if one exists within 25 miles of the establishments.  As of now, no such facility exists within 25 miles of Warren County. However, should a local one be constructed, the new state law would take effect here.

“It’s important that we maintain a dialogue with our private waste haulers about what it will take for them to come into compliance with state regulations,” said Conover. “If we can remove the organics from the waste stream, we’re reducing it by 35%. That could be a huge savings in hauling and tipping costs for us and a benefit for the environment.”

In its report, “Revitalizing Our Transfer Stations: Best Practices and Recommendations,” which Diane Collins presented to the Public Works Committee, Zero Waste Warren County stated, “Recycling businesses are looking for large quantities of high-quality, source-separated recyclables. When transfer stations meet the requirements of the markets, they can command good prices.”

Collins told the Supervisors, “Old corrugated cardboard sells at $150 per ton. We pay close to that amount to have it taken off our hands and hauled away, costing taxpayers, thousands of dollars annually.”

According to Collins, Bolton paid $24,481.25 to have its cardboard removed from its transfer station.

To make the transition from paying for cardboard to be removed to selling it for a profit, the material must be collected, cleaned and flattened at municipal transfer stations, said Collins.

Thomas Szabo, the Warren County Solid Waste and Recycling Coordinator, said mobile balers can be purchased that could process and store carboard until ready to be retrieved by paper mills.

Collins said her group will contact paper mills that have expressed interest in purchasing corrugated cardboard and reports its findings to the Supervisors.

“As citizen partners, we value our relationship with the Department of Public Works, setting goals and finding solutions to that will increase the rates of recycling at our transfer stations and identifying financially sound solutions to the management of recyclables,” Collins said.