“THIS WAS LAKE GEORGE”

A gallery devoted to the Lake George of Fred Thatcher expands and deepens “The Thatchers: Photographing Lake George 1880-1850” at the Bolton Historical Museum 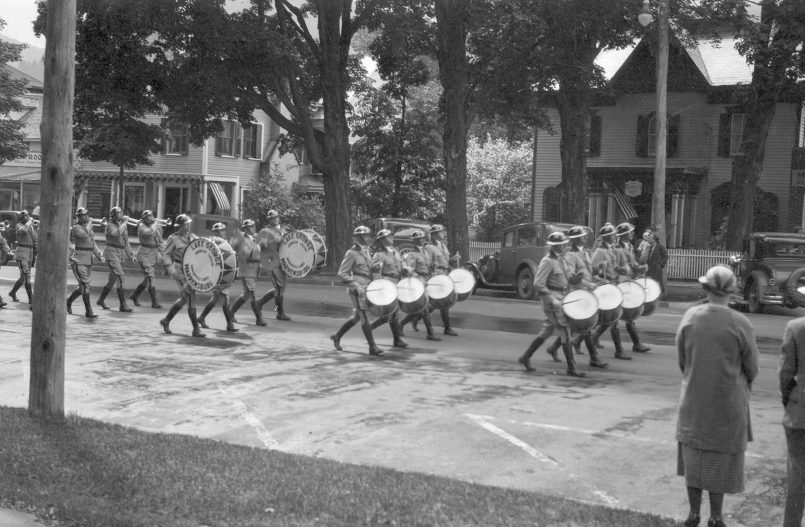 “The Thatchers: Photographing Lake George 1880-1950,” the exhibition that opened last summer at the Bolton Historical Museum, has been expanded to include a gallery devoted to Fred Thatcher’s Lake George, titled “This Was Lake George.”

“The 7,000 Thatcher photographs and negatives comprise the strongest collection in the holdings of the Bolton Historical Museum,” said Dr. Glenn A. Long, the museum’s interim executive director. “It’s a resource that

that we can tap into for nearly any kind of history that we may want to present.”

“This Was Lake George” includes photographs of buildings – some still standing, some demolished, some converted beyond recognition, – automobiles of the era, the varied shops and stores that served both residents and visitors, restaurants, hotels, entertainers and people at work, celebrations and tourists enjoying themselves.

“It’s a visual record of life on Lake George, in which people are shown doing what we’re still doing today,” said Long.

The exhibit also includes photographs of Fred Thatcher’s own family.

Though born in Bolton Landing and married to a Bolton native, Fred Thatcher chose to make his career and his life in Lake George Village.

“He was a very special man,” his daughter, the late Helen Thompson, once told the Lake George Mirror. “He was not only a photographer, he was a builder, a businessman, and very involved in the community. He served as mayor, assessor, Justice of the Peace, village trustee, treasurer of the fire department.”

“He took pictures of so many people: from Theodore Roosevelt and Franklin Roosevelt, from famous wrestlers to Madame Sembrich and her students, from Governors and every other notable that came to Lake George to the people in the village. There was hardly a child in the village who was not photographed by him. His photographs appeared everywhere, from the New York Times to real estate brochures advertising the Mansions on the Bolton Road,” Mrs. Thomson said.

And he knew everyone. Mrs. Thomson said of Alfred Stieglitz and Georgia O’Keefe, “she was very statuesque…. he was always dressed in black. My father developed film for him.”

In 1943, Harry K. Thaw, who shot the architect Stanford White, purchased Villa Marie Antoinette, the Bolton Landing estate. He was among the celebrities photographed by Thatcher. Alma Gluck and Efrem Zimbalist, Sr. were other subjects.

“They had a house on West Street. When Alma Gluck was expecting her child, she’d come and rock his baby son to get used to holding a child,” said Mrs. Thomson.

Thatcher’s first studio was on the corner of Canada Street and McGillis Avenue; the second became the Sky Harbor Restaurant. Thatcher also owned a stretch of Lakefront property, which he leased to a flying service, later operated by Harry Rogers and George McGowan, Sr.

A 1918 trip to Florida inspired an interest in Spanish style architecture, and when the family returned to Lake George Village, Thatcher built the Lake View Hotel on Canada Street.

“It was a beautiful hotel,” recalled Mrs. Thomson.  “It had fireplaces, fine wood floors and 40 rooms.”

Thatcher moved his studio to the hotel after he sold Sky Harbor to George McGowan. There, he hand-colored black and white negatives and sold color postcards of his work, primarily landscapes, which he thought of as his best work.

Thatcher brought his son Glenn into the photography business in the early 40s, and Glenn Thatcher became the third generation of the Thatcher family to become a professional photographer. During World War II, he served as an aerial photographer in the South Pacific. After being discharged from the US Navy, he returned to Lake George. His early death in 1948 cut short a promising career.

Many of Fred Thatcher’s photographs are of historical significance, such as the photos of the Roosevelts or the one of Jack Dempsey. Others, the photographs of the fires at Fort William Henry and at Hall’s Boat Corp., among them, document events of importance to those of us who live here. Still others show us what life was like here, and, sadly, how much we have lost. But without them, we would have nothing to aspire to.

“The Thatchers: Photographing Lake George 1880-1950,” is based on archives maintained by Fred Thatcher’s daughter, Helen Thomson, and donated to the Bolton Historical Museum by her children, Fred Thomson and Patricia Smith.  The exhibition will remain on view through Columbus Day weekend, 2022. The Bolton Historical Museum, which is located at 4924 Lake Shore Drive in Bolton Landing, is  open six days a week, Tuesday through Saturday, from 10 am to 4 pm. For information, call 518-644-9960.