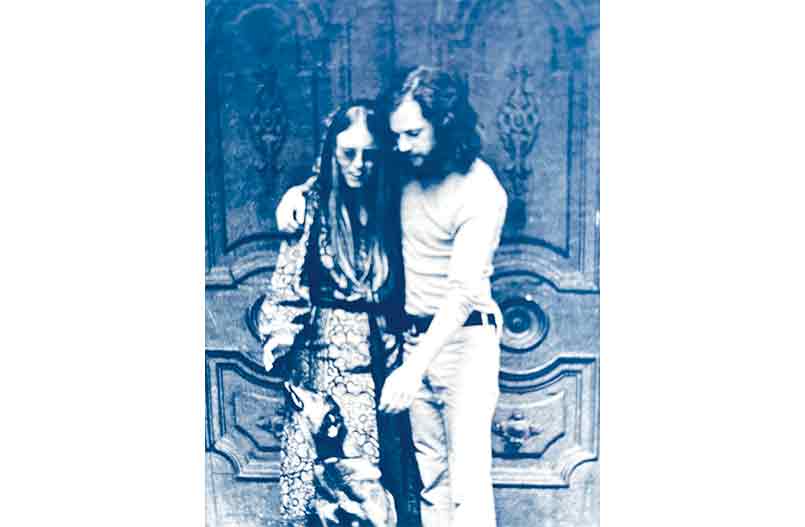 I happened to pick up this 1972 album by a band called McKendree Spring in Mike DeLarm’s Bolton Landing shop, Lakeview Antiques, which has a large selection of vinyl records.

As it happens, McKendree Spring, which Billboard magazine once called “one of the best unknown groups in the world,” was based in Bolton Landing.

I first learned of the band ten years ago, when researching the history of Golden Heart Farm, the Bolton Landing artists’ colony established by Thomas and Weber Furlong in 1921.

For three decades, from the 20s through the 50s, artists came to the farm every summer to work and study with the Furlongs.

A few years after Thomas Furlong’s death in 1952, Weber Furlong moved to Glens Falls, where she continued to teach and paint until her death in 1962.

That, more or less, was where my story ended.  But at least one chapter of the tale was missing, because I was unable to answer this question: what became of Golden Heart after Weber Furlong sold it?

“There’s a reason why Dreyfuss is known as ‘Doc.’ He holds degrees in physics and medicine. And he was a founding member of a band called McKendree Spring. He’ll fill you in,” said Caldwell.

I reached Dreyfuss at his home in Cleveland, Ohio.

“The Furlongs and my parents became fast friends, and we would visit every summer for two weeks or so. My mother painted. My father and I hung out,” said Dreyfuss

“Several years later, Weber was offered a modest amount for Golden Heart. We offered her more, because she was such a good friend. And next thing you know, we owned a great deal of land, a barn, a house that was quaint, without water or electricity, but with an astonishing view of Lake George.  Olaf Ronning rehabbed the house and put it into beautiful shape,” recalled Dreyfuss.

Seeking a quiet place where he could complete his first novel, Dreyfuss and his wife, Elizabeth Travis Dreyfuss, moved to the farm in 1965.

“Elisabeth taught American history at Adirondack Community College, while I stayed home, being a daddy to our first child and writing,” said Dreyfuss.

Having played the violin since he was five and the viola since high school, Dreyfuss also taught music at Skidmore.

“I also played chamber music with local musicians, mostly from Saratoga Springs. I remember one summer in particular. A friend of mine, a cellist named Christopher von Baeyer happened to be performing with the Lake George Opera Festival, and he stayed with us.  After the performances, he would bring home a bevy of extraordinary musicians. We had three cabins, and the musicians would spend the night. Our chamber music evenings usually began around 1 am and ended at 4 am, by which time Chris and I were inevitably incoherent, mentally and musically,” said Dreyfuss.

“Elizabeth mentioned that she had heard a student in an ACC talent show who sang beautifully. ‘Would you like to meet him?’ she asked. His name was Fran Mckendree. Elisabeth brought Fran to Golden Heart one day and we hit it off immediately, very much enjoying improvising and playing tunes together. We invited guitarist Marty Slutsky and bass player Larry Tucker to join us, and we rehearsed with the intention of forming a band. That was the beginning of McKendree Spring,” said Dreyfuss.

“We knew we had something right away. Our first official gig was a benefit for the NAACP in Glens Falls. We had heard that the organization was under duress, and we volunteered to play. All the instruments, including my violin, went through a small Fender Reverb amp which I had purchased at a gift shop in Glens Falls,” said Dreyfuss.

The band, which drew upon the traditions of American folk music that also inspired groups like the Byrds, the Flying Burrito Brothers, Poco and Quicksilver Messenger Service, began playing the coffee house circuit from Boston to New York. The band’s rise was a quick one.

“Sometime in 1968, we decided to drive to New York in our Dodge Dart with our instruments and gear and audition for the Bitter End’s Hootenanny Tuesdays, where we knew bands got discovered by agents, managers, and other record people. We made it through the audition and were scheduled to play the Hootenanny late – 2 am.  The place was nearly empty. They invited us back and as a result of that show we were offered recording, publication, and management contracts,” said Dreyfuss.

Within the next few years, the band traveled through Europe and the United States, performing at places like Carnegie Hall, Lincoln Center, Radio City Music Hall, and at the Washington Monument, where the group played before a million Vietnam War protesters.

“Between tours, we would come home to Bolton Landing to crash,” said Dreyfuss.

Ted Caldwell remembers a concert presented by McKendree Spring in the Bolton Central School auditorium in the early 1970s.

“It was too loud,” said Caldwell.

Michael and Elisabeth Dreyfuss sold Golden Heart in 1972, and the members of Mckendree Spring went on to pursue new careers.

Mckendree, Slutsky and Dreyfuss, however, still re-unite on occasion, and in 2010 the band released its first studio recording in 35 years., “Recording Number 9.” The Progressive Rock Hall of Fame named it the best progressive rock album of the year in 2011.

Dreyfuss’ days in Bolton Landing, though, are indelibly printed in his memory.

“I’ll never forget that view across Lake George from Golden Heart, or rehearsing in barn,” said Dreyfuss. “Bolton Landing was essentially dead in the winter, but it was a fun, relaxed place, especially in the summer. I was always struck by the camaraderie and the good will of the community.”