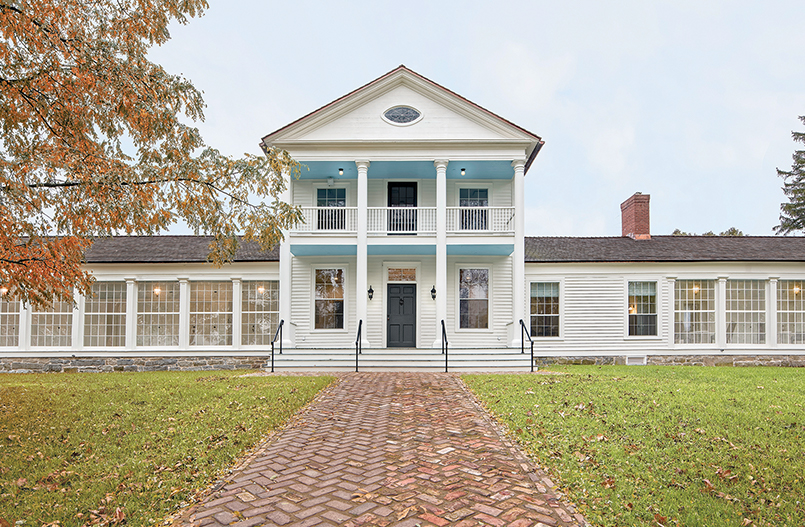 A ribbon-cutting ceremony was held on the porch of the Pavilion – the very spot where President William Howard Taft stood and spoke in 1909, as Fort Ticonderoga president and CEO Beth Hill pointed out – on June 22.

“We have saved a national treasure, and through its imaginative, adaptive re-use, we have expanded our amenities and enhanced our guests’ experience,” said Hill.

The ceremony, which was attended by State Senator Dan Stec and Assemblyman Matt Simpson, among others, not only brought the seven-year, $9 million restoration project to a close; it served as a launch pad for the next phase of Fort Ticonderoga’s $70 million redevelopment.

“We have big plans, not only for Fort Ticonderoga but for our community,” said Hill. “Our major capital investments will comprise one of the largest economic development projects in the North Country in decades and become a significant economic driver, attracting more people to the region.”

The ambitious, $70 million scheme, $20 million of which has already been raised, includes the purchase of the single most important collection of 18th century militaria in private hands and the construction of a national museum of military history.

“This new museum will highlight America’s military heritage from colonization through independence,” said Hill. “It will tell the globally important story of our nation’s origins.”

By 2030, Hill estimates, the economic impact of Fort Ticonderoga will be worth $77 million, supporting 678 jobs and generating $56 million in tax revenues.

New Uses for The Pavilion

As envisioned by Fort Ticonderoga’s comprehensive plan, the Pavilion will be its own “node,” different from but inextricably related to the other features of the campus, the fort included.

“The Pavilion gives us flexibility to use the space as the experience expands,” said Hill. “We’re not going to be confined to just a few opportunities.”

Among its current uses: office space for staff and a venue for weddings, conferences and corporate retreats.

According to Stuart Lilie, Fort Ticonderoga’s, vice-president, several rooms in the Pavilion’s north wing can be used as bridal suites.

The hotel’s small dining room is serving that purpose once again, with direct access to a modern, restaurant-quality kitchen for the use of catering staffs and an as yet-to-be-hired food and beverage manager.

The room will be open to the public as a café on a limited basis this summer, said Hill.

Julia Nittler, Fort Ticonderoga’s Event coordinator, said events are being booked for both 2022 and 2023. The cost to rent the Pavilion’s spaces for a day starts at $5,000.

According to Matthew Keagle, curator, the rooms, walls and cabinets of the Pavilion also serve as exhibition space for art, antiques, decorative arts and artifacts.

“The Pavilion ceased to be used a summer home more than thirty years ago, but the house came to Fort Ticonderoga as the last occupants left it. All its contents were left here,” said Keagle. “We’ve inventoried and catalogued those contents and continued to research their origins and uses to better understand how the house was furnished and how the house was used by the Pells when it was home.”

Guided tours of the Pavilion will start this summer, said Hill.

The Pavilion as a Hotel

William Ferris Pell started building the Pavilion in 1827, a few years after he had purchased the Fort Ticonderoga ruins and surrounding lands from Union and Columbia Colleges.

Pell soon realized that a hotel was needed to lodge the increasing numbers of tourists visiting the fort or transferring from Lake George steamboats to those plying Lake Champlain, and by the 1840s, the house had become a hotel.

Some of the guest registers have been preserved, and according to Fort Ticonderoga curators, the hotel lodged a number of notables, including Francis Parkman, Seneca Ray Stoddard, Robert Todd Lincoln and U.S. Grant, Jr.

Among the items unearthed during the restoration: oyster shells.

According to Margaret Staudter, Fort Ticonderoga’s Director of Archaeology, oysters were among the foods served to hotel guests. Those luxuries – and luxuries of the non-edible sort, as well as everyday objects such as transferware dishes – were brought from New York to the Champlain Valley via the Hudson River and the Champlain Canal, which opened in 1823. Canal schooners as well as steamboats carrying travelers from Lake George north to Plattsburgh docked at the pier a short walk the Pavilion, Staudter said.

“The Pavilion is a critical link spanning nearly two centuries of Fort Ticonderoga’s history encompassing the stories of landmark preservation and  the birth of American tourism,” said Beth Hill.

The Pavilion as a Summer Home

When William Ferris Pell’s great-grandson, Stephen H.P. and his wife Sarah G.T. Pell began the restoration of Fort Ticonderoga in 1909, they simultaneously undertook the restoration of the Pavilion and used the house as a summer residence for the next several decades.

After Stephen Pell’s death in 1950, their son John occupied the house through 1987.

As one of the earliest summer homes in the region, the Pavilion is considered one of the most important historic structures in the Adirondacks, said Beth Hill.

The restoration of the Pavilion began in 2014 under the direction of John G. Waite, whose architectural firm specializes in historic preservation.

It included meticulous attention to period detail, such as the 1830s windowpanes, which were cleaned and refurbished before being restored to their original frames.

According to Fort Ticonderoga trustee and architectural historian Richard Longstreth, the Pavilion is “a variation on the Palladian villa,” inspired by Thomas Jefferson’s designs for the University of Virginia.

The Pavilion and the King’s Garden

The agricultural history at Fort Ticonderoga dates to 1756 when the French built the Garrison Gardens below the walls of the Fort.

Its farms and gardens will now be used to create “a farm to table experience” that will be a featured part of catered events, as well as new culinary programs, said Hill.

“The new programs will connect Fort Ticonderoga’s gardens and produce with centuries of international history and hospitality and respond to a growing demand for culinary experiences and training,” said Hill. “Students will also have the opportunity to dig deep into the site’s rich agricultural story and carry their experience into the teaching kitchen to learn about healthy eating in the past and today.”

In 2026, Fort Ticonderoga will celebrate the 250th anniversary of the Declaration of Independence.

By then, planning for the new museum will be well underway, if not already under construction.

“As we prepare for our national 250th Commemoration, we are thrilled to be moving forward with our plans for Fort Ticonderoga’s future,” said Beth Hill.