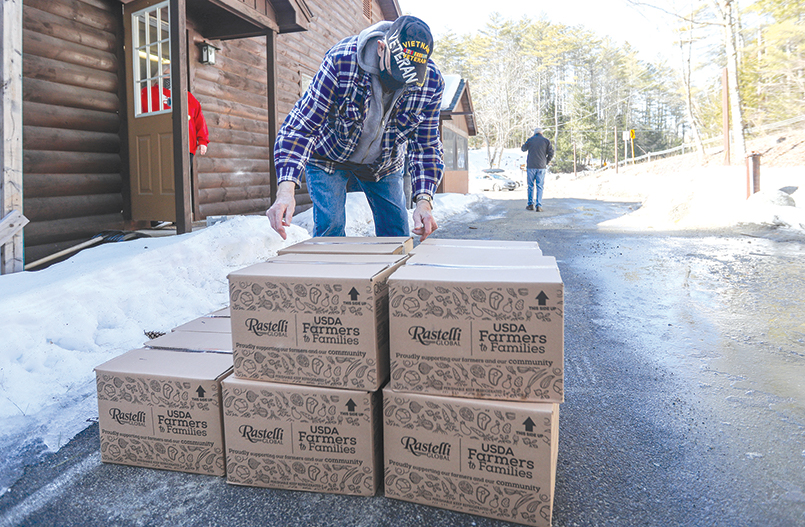 A Food Pantry in Brant Lake was funded with support from Adirondack Foundation and North Country Ministry.
By Anthony F. Hall

Given the environmental and economic diversity of the six-million-acre Adirondack Park, it’s not surprising that only a handful of organizations have a reach that extends to every town and village lying within the Blue Line.  The Lake Placid-based Adirondack Foundation, one of a score of community trusts in New York State, is among that small group. It celebrates its 25th anniversary this year.

“Our first steps were to identify the critical issues that weren’t receiving the attention they warranted,” said Cali Brooks, the foundation’s president and CEO.  “Those gaps in services, those overlooked and neglected needs, presented us with opportunities to become the effective partner of private foundations, of public agencies and of non-profit organizations that we are today.”

In its first year of operation, Adirondack Foundation – known then as Adirondack Community Trust – distributed $20,000 in grants.

In 2021 alone, acting separately or in conjunction with groups such as Hudson Headwaters Health Foundation, the Charles R. Wood Foundation and Stewart’s Foundation, the Adirondack Foundation awarded $6 million in grants across a spectrum of “critical issues.”  Among them: health; hunger; education; early childhood; the arts.

“In the Adirondacks, everybody loves their own lake, their own hamlet. To create something with regional appeal initially seemed a bridge too far to me. But they did it. Adirondack Foundation is one amazing success story,” said Bob Kafin, the retired environmental attorney and Bolton Landing resident.

“The vision of the founders was to create a resource for people who love the Adirondacks and who want to give back in strategic ways,” said Brooks.

Existing foundations like the Lake Placid Education Foundation and the Elizabethtown-based Crary Foundation, which awards scholarships to college-bound Adirondack residents, or family foundations with well-defined missions, were invited to pool their assets.

The new non-profit also encouraged philanthropically minded families and individuals to establish funds that would grow under the stewardship of Adirondack Foundation and generate the income necessary to fund the programs, institutions and needs of the region.

Today, the Adirondack Foundation has $95 million in assets.

“I don’t think the founders could have visualized what we are today,” said Brooks.

“Adirondack Foundation is no longer simply a bank for charitable dollars,” said Meredith Prime.  “It is a place where people who have the capacity and the interest can bring their charitable dollars to be carefully stewarded and used to tackle so many issues, particularly through the Generous Acts program.”

The Adirondack Foundation established its Generous Acts grants program in 2014 to harness the wealth of the Adirondacks to the socio-economic, civic and social needs of the region.

According to Connie Prickett, the Adirondack Foundation’s vice-president of Communications and Strategic Initiatives, roughly half the funds supporting the grants in 2022 came to the Foundation as unrestricted donations, the other half from the Foundation’s funding partners, which review applications and select the proposals that align with their mission statements.

“Literacy, early childhood education, college and career pathways and workforce development initiatives are as important as ever —the compelling work in these areas deserves our support,” said Cali Brooks.

Of the 110 grants awarded in 2022, more than half serve people living at or below the federal poverty level.

Three-quarters of the organizations awarded a Generous Acts grant will use the money to leverage additional funds to support their work, according to the Foundation.

Since 2014, Adirondack Foundation has awarded $2.5 million in Generous Acts grants throughout the Adirondacks.

Over the last few years, Adirondack Foundation’s presence in the southern Adirondacks and the Lake George region has grown.

Its Generous Acts grants have helped fund food pantries at the Caldwell-Presbyterian Church and in Brant Lake and a range of programs at Hudson Headwaters Health Network and the Ticonderoga Central School.

Other Generous Acts grants have been awarded to the Adirondack Theatre Festival, the Lake Champlain-Lake George Regional Planning Board and to a scholarship program sending children from low-income families to summer camps such as YMCA Camp Chingachgook in Pilot Knob.

It has also attracted the support of Lake George residents.

Last year, for example, one prominent local family created a “Donor Advised” fund that generates income for its preferred Lake George-area charities, for Generous Acts grants and for special programs and projects brought to its attention by Adirondack Foundation staff.

By contributing unrestricted funds for Generous Acts grants, “We feel as though we are helping the general Adirondack community without having to review every application and weigh the value of every project ourselves,” a member of the family said.

Bob and Carol Kafin also created a Donor Advised fund for their family.

The Kafin family’s fund will remain with Adirondack Foundation into perpetuity.

“Establishing a fund with Adirondack Foundation places your philanthropic resources in a location where no matter what happens to you, there’s an assurance that those resources will be used for the people of the Adirondacks,” said Kafin.

“If we demonstrate bold, but well-thought-out planning… more people will want to utilize Adirondack Foundation for their philanthropy,” said Creighton.

Cali Brooks said she expects Adirondack Foundation’s presence in the Lake George region will only grow.

“For many years, we were a very quiet organization,” said Brooks. “But more recently, we’ve become more proactive in our efforts to reach out and meet the people who play prominent roles in the community, letting them know that the Adirondack Foundation is here and explaining what we do,”

The more Lake George residents identify this region with the Adirondacks, with Park-wide issues, concerns and needs, the more interested they will become in Adirondack Foundation, Bob Kafin says.

“When people make gifts, they tend to look first at very local places. But Adirondack Foundation has the capacity to be a magnet for charitable giving that will overcome even the most parochial outlook,” said Kafin.