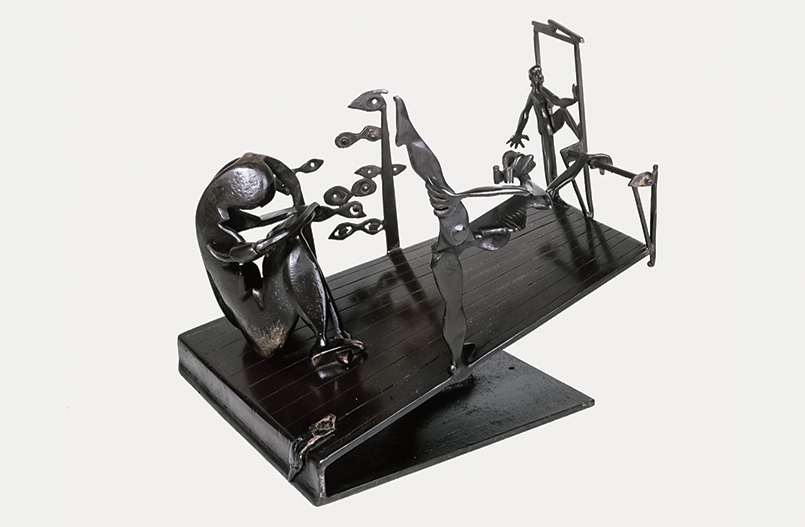 Music was so important in  the life of sculptor David Smith that he hoped his two daughters, Rebecca and Candida, would become musicians – going so far as to hire Bolton Landing organist and harpsichordist Hugh Allen Wilson to give them private lessons.

A drawing that Smith gave to Wilson, based on a performance by the harpsichord player Sylvia Marlowe, is now owned by The Hyde Collection and will be included in its 2023 show “Songs of the Horizon: David Smith, Music, and Dance.”

According to The Hyde, the exhibition will be the first to focus exclusively on the influence of music and dance on Smith’s painting, drawing and sculpture.

It will include works from the Estate of David Smith, loans from important private and public collections and a selection of rare archival materials.

Two tall vertical sculptures will be installed on The Hyde’s lawns for the duration of the exhibition, which opens June 24 and closes September 17, 2023.

“Songs of the Horizon: David Smith, Music, and Dance” will also include work by the artist’s first wife, Dorothy Dehner.

Dr. Jennifer Field, Executive Director of the Estate of David Smith, will be the show’s curator.

“The Adirondack region that encompasses Bolton Landing and Glens Falls was inseparable from Smith’s artistic practice,” said Field. “A dialogue with nature—the mountain landscape, the change of seasons, the flight of birds—is reflected in his artwork in every medium.”

Smith, commonly regarded as the greatest American sculptor of the 20th century, bought a former fox farm in Bolton in 1929 and was a vital member of that community until his death in 1965.

In the 1940s, inspired by productions such as those staged by modern dance choreographer Franziska Boas, in Bolton Landing, Smith began depicting performers – musicians and dancers – absorbed and even possessed by music.

“The impact of music and dance were integral to reaching a critical point in Smith’s artistic maturity. His work became larger and more abstract,” The Hyde stated in a press release.

“Songs of the Horizon: David Smith, Music, and Dance” is intended to honor the sixtieth anniversary of The Hyde, where Smith was a trustee, and will be the first major exhibition of his work in this area since 1973, when The Hyde Collection mounted “David Smith of Bolton Landing: Sculpture and Drawings.”

According to Jason Ward, Hyde Collection Board of Trustees Chair, “David Smith was not only one of The Hyde’s earliest trustees, he curated The Hyde’s very first summer exhibition, installing his own sculptures on the lawn. Our intimate association with David Smith is what the Museum seeks to highlight with this anniversary exhibition.”

Rebecca and Candida Smith, co-presidents of the Estate of David Smith, have played an active role in the creation of the exhibition.

“I am thrilled to see my father’s work back at The Hyde Collection,” said Rebecca Smith. “We are gratified to be able to present this art in an institution so important to the region in which it was made, and where the artist worked.”

“There was a powerful community of artists and performers in the southern Adirondacks which enriched the wild beauty of the mountains and lakes. It reverberated through Smith’s practice,” said Candida Smith.

The Hyde expects “Songs of the Horizon: David Smith, Music, and Dance” will draw not only those interested in Smith’s work but scholars and lovers of the performing arts their enduring traditions in the Adirondack region.