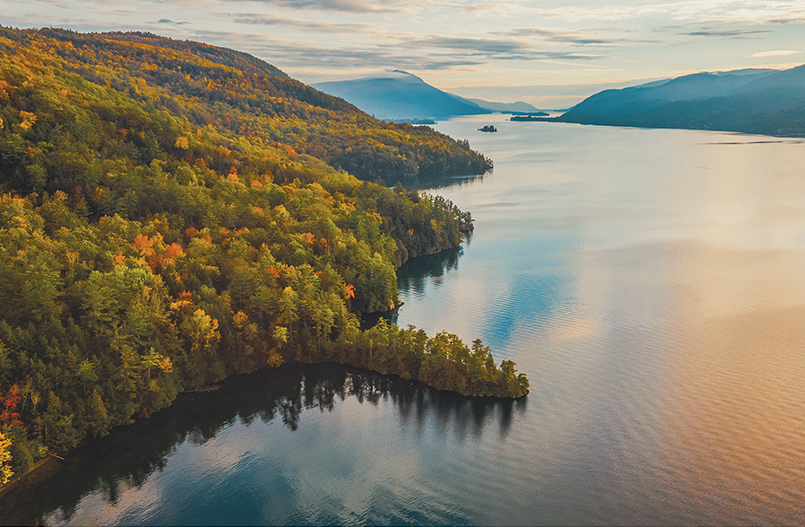 The 60-acre Clark Hollow Preserve, which will be a focus of the Lake George Land Conservancy’s July 29 Land & Water Conservation celebration, is summer habitat for the Timber Rattlesnake, according to the organization.

Dr. William S. Brown, the foremost authority on the Timber Rattlesnakes of Lake George and its uplands, confirmed that observation.

In 2012, Brown and Jed Merrow surveyed the property for its then-owners, who planned to subdivide the tract into seven building lots.

One of those lots would have been especially attractive to Timber Rattlesnakes, Brown and Merrow concluded.

“Containing some lightly wooded potential- basking habitat, most of the area of Lot 6 would appear likely to (be suitable) temporary summer range for occasional rattlesnakes,” they stated.

Anyone residing in a home built on that lot would, in all likelihood, have encountered rattlesnakes

“That would have been of more than casual interest to a prospective homeowner,” Brown and Merrow wrote.

The acquisition of the 60-acre property, negotiated with the owners, will save the tract from that type of development, said Mike O’Reilly, the president of the conservancy’s Board of Directors.

“The Adirondack Park Agency approved a seven-lot-subdivision for this site, which would have resulted in seven houses, seven septic systems and three boat houses,” said O’Reilly. “Now, these sixty acres of woods, streams and lake front will be protected forever.”

Dr. Brown said wilderness protection in the Lake George area has saved the Timber Rattlesnake; in nearby states the species has been extirpated and in downstate New York it is threatened by encroaching development.

Habitat protection, as well as New York’s 1983 decision to declare the timber rattlesnake a protected species, making it illegal to capture or kill the snakes, amount to a conservation success story, Brown said.

With the protection of the Clark Hollow Preserve, the Lake George Land Conservancy has created a contiguous block of forested land from Huletts Landing to Gull Bay Road

that supports not only Timber rattlesnakes but a wide range of wildlife, said Monica Dore, the organization’s Conservation Manager.

The Clark Hollow Bay Preserve property carries a roughly $5 million price tag, more than $3 million of which has been pledged thus far.

The Lake George Land Conservancy is actively engaged in raising the remaining amount.

Earlier this summer, for instance, the Conservancy announced the launch of the Beaty Family Challenge, an initiative created by Jim’s wife Seddon, son James, brothers Terry and Jeffrey and a cousin that will match contributions to the acquisition of the Clark Hollow Bay Preserve up to an amount of $325,000.

According to O’Reilly, maintaining the property in its natural state will help protect water quality in the lake’s north basin.

The land is not being purchased primarily, or at all, for its recreational opportunities, said O’Reilly.

“Our mission is to protect the land that protects the lake; that is the only thing we do,” he said.

According to O’Reilly, the entire shoreline of Lake George from Bluff Head in Huletts Landing to Gull Bay Road in Putnam will now be “forever wild.”

O’Reilly said it was fitting that the Conservancy’s latest project in many ways completes its first: the Lamb Shanty Bay property, later named the Margaret Boyd Rowan Preserve.

When first approached by organizations with requests to contribute to an effort to protect that portion of the east shore, the late Henry Rowan offered to donate $250,000 if contributions from other individuals equaled that amount, and another $250,000 of $1 million was raised. By 1990, within two years of the Conservancy’s founding, the purchase price of $2.5 was met.

As an expression of gratitude for Rowan’s efforts, the tract was named the Margaret Boyd Rowan Preserve in 1999 in honor of his late mother, whose father, William Boyd, was an early, influential trustee of the Silver Bay YMCA.

New York State acquired the land that year for the Adirondack Forest Preserve.

According to O’Reilly, the Lake George Land Conservancy intends to retain ownership of the Clark Hollow Bay Preserve rather than sell it to New York State.

Among the land’s features are: Hemlock forests, timber rattlesnake habitat and 1,300 feet of stream channels.

“Those who live in Silver Bay or Hague look at this property lying across the lake all the time,” said O’Reilly.