The Love Song of Alfred and Georgia 

Nearby Faraway, the musical based on the lives O’Keeffe and Stieglitz, opens in Lake George July 22 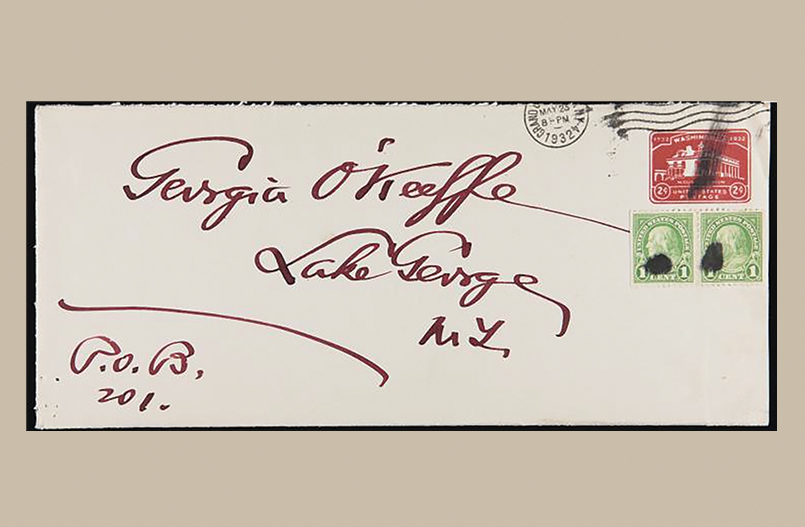 A letter addressed to O’Keeffe at Lake George from Stieglitz.
By Anthony F. Hall

“Nearby Faraway,” an original musical based upon the lives of Georgia O’Keeffe and Alfred Stieglitz, will be staged July 22-24 and July 29-31 at the Carriage House Theater at Fort William Henry.

“However complex their marriage, the story of O’Keeffe and Stieglitz is a love story, a love story about people who were incredibly talented and powerful,” said Neal Herr, the author of the musical’s book and lyrics.

Georgia O’Keeffe is so closely identified with New Mexico that many people are surprised to learn that much of her most important work was completed on the shores of Lake George.

Although O’Keefe spent a summer on Lake George in 1908 at an artists’ colony founded by Yaddo benefactors Spencer and Katrina Trask, it was not until 1918 that she became an annual summer resident.

A few years earlier, she had fallen in love with Alfred Stieglitz, the photographer and impresario whose family started coming to Lake George in the 1870s. The family compound would become the couple’s sole, permanent home until Stieglitz’s death in 1946.

“O’Keeffe was in her twenties when she met Stieglitz and she outlived him by forty years. This show focuses on the years they were together on Lake George, where O’Keeffe discovered herself as an artist and where she would be discovered by the world,” said Herr.

Herr, who has an MFA in musical theater from NYU, said he spent twelve years writing “Nearby Faraway” and even longer thinking about O’Keeffe, Stieglitz and of the possibilities their story might have as a “high-art musical, a cross between a play and an opera.”

To create “Nearby Faraway,” Herr drew upon the closely-knit community of artists that has developed in and around Glens Falls over the past few decades, one that includes his former wife, the composer Catherine Reid.

“Catherine is an internationally-celebrated composer who’s won more commissions to create locally-based pieces than any other composer from the area, and who is also the best music director that I know of,” said Herr.

Moreover, “Catherine Reid is a magnet for talent,” said Herr.

“Even before they knew what the show was about, as soon as they knew Catherine was involved, everyone I asked to commit to this project said, ‘I’m there,’” said Herr.

“You feel as though you are inside an O’Keeffe painting,” said Herr.

“Nearby Faraway” has also won the financial backing of Warren County, the Town and the Village of Lake George, the Touba Family Foundation and corporate sponsors such as Stewart’s Shops.

If the production is well-received, “Nearby Faraway” may become an annual Lake George attraction, said Herr.

For tickets and information, visit nearbyfaraway.org.