Stopping Pollution at its Source 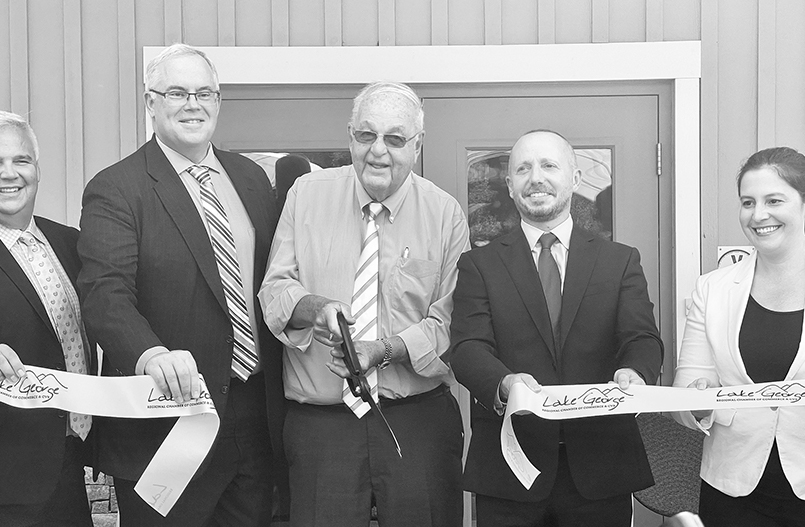 “The results speak for themselves,” Lake George Waterkeeper Chris Navitsky said at the ribbon cutting ceremony at the plant on August 24. “Nitrates levels are down over 50%. Things will only get better.”

According to Navitsky, who conducted a 17-month long study of the original plant’s impacts on water quality with retired DEC scientist Jim Sutherland, the old plant was the primary source of elevated levels of nitrogen in the lake’s south basin and the single, largest influence on negative water quality in the West Brook watershed.

“I cannot help but recall the day Mayor Bob Blais walked into my office, sat down and told me there were problems at the plant and asked for my help,” said Navitsky.

Excessive levels of nitrates stimulate the growth of weeds and algae and can endanger fish life, the quality of drinking water, recreation and even human health, said Navitsky.

Addressing Pollution at the Source

Mayor Blais began seeking state grants to modernize its New Deal-era Wastewater Treatment Plant in the 1980s, nearly thirty years before the Department of Environmental Conservation ordered it to be replaced in 2016.

Lake George Village secured $17.4 million in grants to fund significant portions of the costs of the new plant’s construction, including the $9.4 million grant from New York State announced in January, 2020.

“There’s never been a time like this for financing environmental protection,” said Seggos, who noted that this year’s state budget included a $400 million Environmental Protection Fund and provisions for a $4.2 billion Clean Water, Clean Air, and Green Jobs Environmental Bond Act, which will go before the voters in November.

Warren County’s Board of Supervisors also agreed to contribute $75,000 per year over the next ten years to help service the debt incurred by the Village to construct the plant.

US Representative Elise Stefanik, who supported a $500,000 federal grant for the plant, also delivered remarks, as did State Senator Dan Stec and Assemblyman Matt Simpson.

According to Mayor Blais, the new wastewater treatment plant is the only one of its kind to be built in New York State within the past year.

“We’re also very proud of the fact that we were able to build a $24 million plant without placing an undue burden upon the taxpayers,” Blais continued.

According to the Mayor, the opening of the plant “will go down in our history not only as an important step forward in lake protection, but in the protection of the economy that we’ve come to enjoy because of the lake.”

Eric Siy, the president of the Lake George Association, recalled that he and the late Ed Bartholemew, the president of Warren County’s Economic Development Corporation, testified at a legislative hearing in Albany as to the importance– to water quality and the economy – of state funding for the plant.

“Side by side, Ed and I advocated for the funds needed to replace the old plant that was polluting Lake George,” said Siy. “We were there as partners, knowing that the environment and the economy are opposite sides of the same coin.”

Siy continued, “In our case, that coin is Lake George.”

Lake George, Siy said, is the lifeblood of the regional economy.

With the completion of the new plant, “the economy can expand,” said Chris Navitsky.

“The old plant was holding growth back, because it couldn’t manage it,” he said, noting that in 2015,

“The recent wastewater treatment improvements, the inspection programs and new construction all complement one another and contribute to the betterment of Lake George,” said Parker. “The entire Lake George Park is moving towards a better tomorrow.”