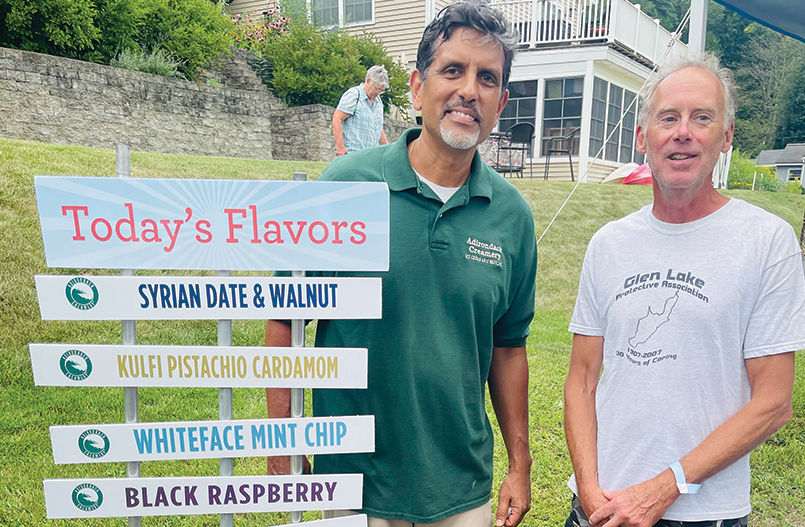 Paul Nasrani, the founder of the Adirondack Creamery ice cream company, believes in the positive powers of ice cream.

The civic mission of his company is, as he says, “to promote the idea that food – even or especially ice cream – can bridge the gaps in our cultures and in our knowledge and understanding of one another.”

The first flavor to exemplify that mission was the company’s Syrian Date & Walnut Ice Cream, created to aid the International Rescue Committee’s efforts on behalf of Syrian refugees. Bearing a message of “Peace,” in English, Arabic and Hebrew, the carton boldly states, “We are all immigrants.”

After the 2018 mid-term election, Adirondack Creamery issued a purple Black Raspberry ice cream to affirm that our true community is neither red nor blue but the union of the two. “More unites us than divides us,” proclaims the carton.

“Food is something we all can share; when you break bread with someone, even if you’re at opposite ends of the political spectrum, you can talk about the food, and that’s a beginning,” said Nasrani.

This year, one hundred percent of the profits from sales of Syrian Date & Walnut will be donated to the International Rescue Committee to aid refugees from both Syria and Ukraine.

According Paul Derby, the organization’s president, the Glen Lake Protective Association is the primary vehicle for keeping the lake free of invasive species and pollution from septic systems.

Whatever their political or cultural differences, the lake is at least one thing that every member of the small community has in common, says Nasrani.

“We all we agree that it has to be protected,” said Nasrani.

Moreover, the opportunities to socialize with neighbors have been few in recent years, he added.

“So if we have a reason to get together, no matter what our points of view or political stripes, such as a benefit for a common good like the lake and the park, it’s well worth the effort. It’s a place to start,” said Nasrani.

Adirondack Creamery was born at the Silver Bay YMCA, a place dedicated to bridging differences among peoples.

Nasrani’s parents met at the College of Wooster in Wooster, Ohio, from which his father went on to become a Protestant minister and his mother a social worker. Shortly after he and his sister were born, the family began taking annual vacations at Silver Bay.

“One of the things I especially liked about summers at Silver Bay was that we were allowed ice cream every day,” he recalled. “I remember telling my friends when I was thirteen that someday I would open an ice cream company and sell its products here, bringing thousands of people to this place.”

In fact, Adirondack Creamery’s first commercial flavors were manufactured and sold at the Silver Bay Store.

Nasrani now serves on Silver Bay’s Board of Directors.

“The values of Silver Bay, its embrace of diversity, have influenced me as a person and my goals for the company,” said Nasrani.