Stewards of the Water: Profiles in Conservation 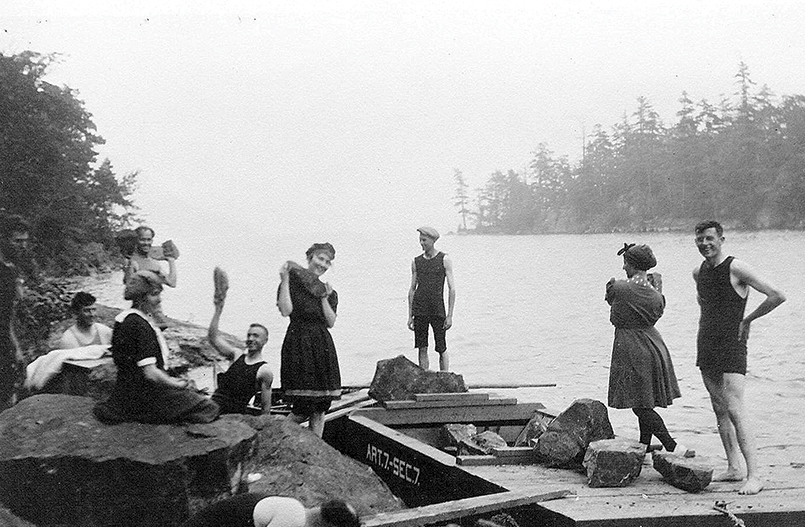 “Perhaps my most deeply rooted hobby is to understand the mechanism of simple and familiar natural phenomena,” Dr. Irving Langmuir once wrote.

That “deeply rooted hobby” led to a Nobel Prize in 1932, awarded the Lake George summer resident for his pioneering work in surface chemistry.

But it also enriched, if it did not inspire, his life-long devotion to the protection of Lake George.

Langmuir’s contributions to the stewardship of Lake George earn him a well-deserved place in a new collection of essays, Stewards of the Water, comprising ten profiles of people and organizations committed to the lasting protection of Lake George.

Roger Summerhayes, who wrote and directed an award-winning documentary about the Nobel laureate, who also happens to have been his grandfather, contributed “Irving Langmuir: Nobel Laureate” to the volume, which was published under the auspices of the Assembly Point Water Coalition.

Summerhayes once described John S. Apperson as Langmuir’s “partner in crime,” and Apperson is also represented in “Stewards of the Water,” through an essay by Ellen Apperson Brown, John S. Apperson: Dean of Conservationists.

Of all their capers, saving Dome Island from development is the most famous. In 1939, Apperson noticed white flags flying from the trees, demarcating building sites. He immediately went to Langmuir to solicit his help. Together, they purchased the island themselves for $5,000. Langmuir later sold his interests in the island to Apperson. But a few years before his own death, Langmuir became chairman of a campaign to raise $20,000. The creation of an endowment large enough to maintain and preserve Dome Island was a condition that Apperson attached to his offer to donate it to the Nature Conservancy.

Apperson’s network of allies included Hilda, Elma and Sylvia Loines, the daughters of Stephen and Mary Loines, who purchased thousands of acres of land around Northwest Bay between 1898 and 1908 – in part to protect them from the same destructive forces that threatened the Adirondacks.

At Apperson’s suggestion, the Loineses decided to donate and sell portions of their land on Tongue Mountain to New York State.

Some in state government, Robert Moses foremost among them, hoped to build a highway along the shore of Lake George at Tongue Mountain. To protect the shoreline, the Loineses agreed to donate land of their own to make an alternate route possible.

For its efforts, the family was attacked in the columns of the Lake George Mirror.

In a letter to the Mirror, Apperson wrote, “Among several very unselfish acts of theirs was the gift to the state of two very important pieces of land for public park purposes, and sometime ago they agreed to give all the necessary land for the Tongue Mountain Road through their estate, although the damage would be extensive; destroying as it does, farm land, vegetable gardens, tennis courts and several structures belonging to them. We have many generous people at Lake George, but no one could have been more generous than they.”

High waters, washing the soil off the roots of trees along the shores of the islands, and killing the trees, had been “a headache since 1887,” a Lake George Association official said in 1943.

In 1909, Apperson began rapping the shores of Dollar Island to prevent erosion. He and Langmuir became convinced that the dam at the outlet of the lake, which was used to generate power for the mills at Ticonderoga, was causing the lake to rise and fall above and below its natural levels, and was thus responsible for the erosion of the islands. Lake George, they declared, should not be a millpond. Since many of the islands suffering from erosion were owned by the state, Langmuir and Apperson believed that New York should sue the owners of the dam for destroying parts of the forest preserve. They urged the state to initiate such a lawsuit, which, had it been successful, would have forced the dam to be demolished.

A dam at the outlet of the lake still exists, still generating power. The courts, however, ruled that the state’s authority exceeded the power company’s and legislation was passed that ensures that the dam is operated in such a way that water levels do not vary drastically from year to year.

The editor of Stewards of the Water, Lorraine Ruffing, has contributed The People v. International Paper Company to the volume; it is the most concise explanation of the controversy yet to be published.

The Lake George Mirror was established in 1880, the Lake George Association in 1885. The interest of the two in preservation, rather than in economic development or in the private concerns of the wealthiest residents of the lake, is of relatively recent origin.

Ginger Henry Kuenzel writes about the LGA in her essay, Institutional Stewards.

Kuenzel also profiles the late Frank Leonbruno, for many years New York State’s man on the public camping islands and Supervisor for the Town of Bolton.

To have given proper due to all who have contributed to the conservation of Lake George would have been impossible.

Nevertheless, people such as George Foster Peabody, Jud Morhouse, Richard Bartlett, Chuck Hawley, Mary-Arthur Beebe, Guy Suits, the Darrin Family and Mark Johnson, to name but a few, are conspicuous by their absence.

And with the exception of Lorraine Ruffing’s essay on Seneca Ray Stoddard, there is little here to situate conservation on Lake George within the wider context of Adirondack preservationist efforts. John Apperson, for instance, always named his boats in honor of the ‘Forever Wild’ clause of the state constitution, affirming the links between the preservation of the Adirondacks and the protection of Lake George. A discussion of Apperson’s influence on wilderness advocate Paul Schaefer, or of why the Blue Line was extended to include the shores of Lake George only in 1931, and of why many LGA members opposed the creation of the Adirondack Park Agency, would have been instructive.

Throughout the summer, Stewards of the Water will be featured at events around the lake.

The Assembly Point Water Quality Coalition will co-host a book launch on June 18 from 10 am – 1 pm at the Lake George Historical Museum in Lake George.

The Warren County Historical Society will host an event on July 16 from 11 am – 2 pm at 50 Gurney Lane in Queensbury.

Ginger Kuenzel will speak about the stewardship of Lake George the Hague Historical Society’s annual meeting on June 29 at 7 pm at the Hague Community Center.

Kuenzel will also speak at Silver Bay YMCA Conference Center on July 19 at 8 pm and as part of the Darrin Fresh Water Institute’s virtual lecture series on July 25.

On Thursday, August 4, a discussion of the stewardship of Bolton residents Frank Leonbruno, Irving Langmuir, John Apperson and the Loines family will be held at the Bolton Historical Museum. Kuenzel and Bolton Town Historian Ted Caldwell will host the event.

According to Assembly Point Water Coalition, Stewards of the Water is available for purchase in stores and at the events surrounding its publication.