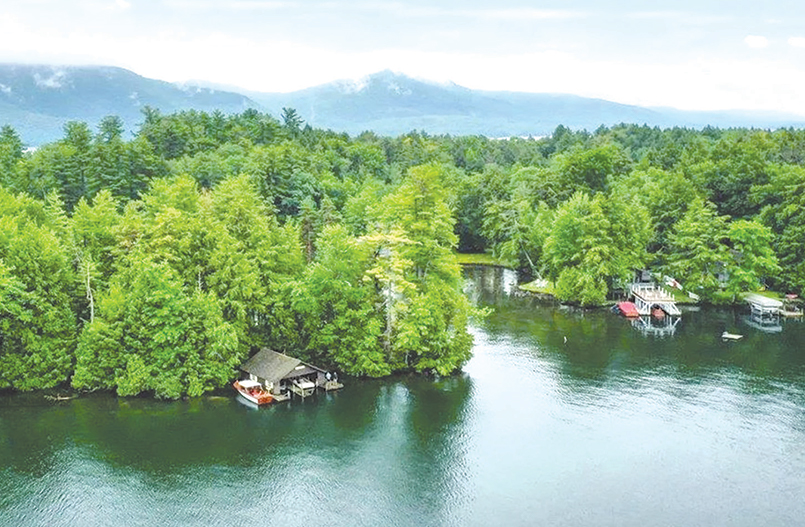 Dr. Mary Putnam Jacobi was among the first to argue for women’s political equality on the basis of physical fitness; there is nothing inherently, naturally delicate about us, she said after years of treating women.

It’s quite possible that Mary Jacobi repeated those arguments to herself while rowing to Bolton Landing from Hiawatha Island, where she and her husband, Dr. Abraham Jacobi, spent their summers after marrying in 1873.

“Sometimes there were squalls that could capsize all but the most skillfully handled craft,” one of Mary Jacobi’s biographers writes.

Hiawatha Island, where the Jacobis lived until 1883, is now on the market for the first time in fifty years. The .8-acre island with 756 feet of shoreline, a one-hundred-year-old log home, a boat house and outbuildings, is available through the Sherwood Group for $3.5 million.

“We love the island; it’s a spectacular place,” said Dr. Michael Simberkoff, a New York physician whose parents purchased Hiawatha in 1967.  “We love swimming and kayaking, but as time goes by, it becomes more difficult to get there as often as we would like and to use the island as it ought to be used.”

Abraham Jacobi is known as the father of American pediatrics. Mary Putnam Jacobi won equal renown as the nation’s most eminent female physician and as a political activist. She was the first woman admitted to the École de Médecine of the University of Paris and the second woman to become a member of the Medical Society of the County of New York.

The Jacobis left Hiawatha after the death of their seven-year-old son Ernst from diptheria. They erected a monument on the island to the memory of their son, who is the only person known to have been born on a Lake George island. It still stands among the hemlocks.

The Jacobis then built a house in Bolton Landing, at the present site of Juniper Hill, where they also built a cottage for Carl Schurtz. Schurz was accomplished even by the standards of the Jacobis and their friends. He served as President Abraham Lincoln’s minister to Spain and as the Secretary of the Interior.

Like many Lake George families, the Simberkoffs spent summers camping on the state-owned islands – in their case, starting in the 1930s – before purchasing a lake house, a camp or property of their own.

Upon learning that Hiawatha was for sale and that it could be purchased, “my father raced up there. Both my parents were lawyers in Mount Vernon, and they fell in love with the island as soon as they saw it.”

In recent years, Dr. Simberkoff and his family have shared the island with his sister, Judith Martialay and her husband Javier and their children. Javier Martialay died in 2020, Judy Martialay in 2021.

“My sister spent a good part of her summers on Hiawatha. She was an incredibly talented painter who turned the island’s icehouse into an artist’s studio. We came up on weekends and we would usually spend two to three weeks thee in August. Since my sister died, there’s really no one available to oversee the place, to make certain the flowers are planted, among other things,” said Simberkoff.

“What more does anyone need?” asked Sherwood Group partner Lonnie Lawrence asked during a recent tour of the island.

According to Lawrence, the house is a duplex, divided into two equal parts, both with stone fireplaces, screened porches and four bedrooms.

The property also comes with a lot on Homer Point where five cars can be parked and a boat can be docked for easy access to the island.

“We hope the next owners are people who love the lake, the beauty of the scenery and the life that comes with living in an Adirondack community,” said Dr. Simberkoff.