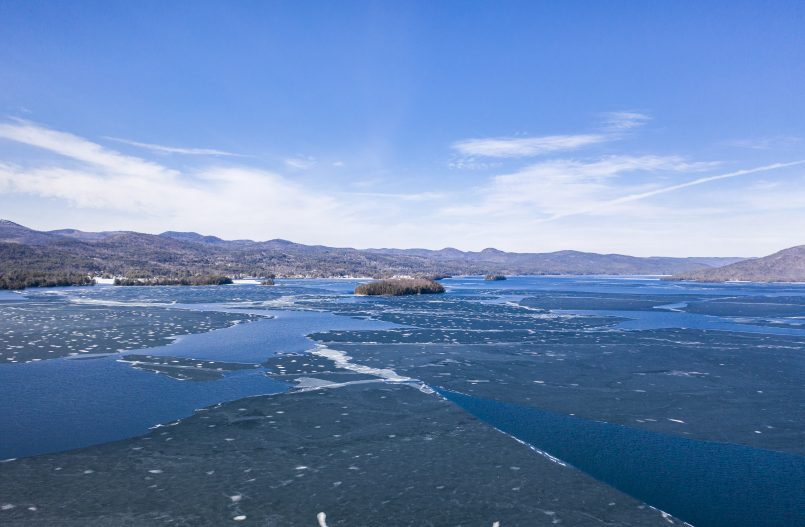 “Spring is a time for the renewal of life,” wrote Rachel Carson in “The Sea Around Us,” a book published ten years before her more famous “Silent Spring.”

As Carson observed (both beautifully and precisely), “Spring moves over the temperate lands of our Northern Hemisphere in a tide of  new life, of pushing green shoots and unfolding buds, all its mysteries and meanings symbolized in the northward migration of the birds, the awakening of sluggish amphibian life as the chorus of frogs rises again from the wet lands, the different sound of the wind which stirs the young leaves where a month ago it rattled the bare branches.”

Spring, of course,  comes not only to land, but to water.

“During the long months of winter, the surface waters have been absorbing the cold. Now the heavy waters begin to sink, slipping down and displacing the warmer layers below…  the waters are deeply stirred  (and) the warm bottom water brings to the surface a rich supply  of minerals, ready for use by new forms of life,” Carson wrote.

There is a famous photograph by Dan Budnik of a man in profile peering down at Lake George, standing alone on  Bolton Landing’s steamboat dock with Dome Island in the background, in late winter or early spring.

It is easy to imagine that he is contemplating the very phenomenon that Carson writes about, the rising of the hypolimnion, the layers of water turning over.

But the man in the photograph is no long-forgotten resident or anonymous visitor. It is David Smith, the sculptor.

For all we know, Carson’s description of the seasonal turnover is in Smith’s mind as he leans over the pier, gazing into the lake.

Smith’s daughter Rebecca has a clear memory of her father reading “The Sea Around Us” in his home in the hills above Bolton Landing. More likely than not, it was a re-reading, occasioned, perhaps, by the publication of Carson’s “Silent Spring” in 1962.

Smith must have been captivated by Carson’s elegant series of essays, originally published in The New Yorker in 1950,  and perhaps, as well,  by the cycles of time and nature that apparently pre-occupied her as she wrote them.

(For example: “Most of the rains that fall… were raised from the sea. They are carried as vapor in the winds, and then with change of temperature the rains fall.” Or: “In the spring the sea is filled with migrating fishes, some of them bound for the mouths of  great rivers, which they will ascend to deposit their spawn. Such are the shad moving into the Hudson. The spring sea and the maturing of their own bodies lead them back to the rivers of their birth.” )

The years 1962 and 1963, when Smith was reading and thinking about Rachel Carson’s writings on nature and science, were also the years in which his own thoughts turned to cycles.

Or so one might easily conclude, looking at a group of painted steel constructions that Smith created at that time, known as Circle series.

(A 2014 exhbition at the Clark Art Institute in Williamstown,  MA, titled “Raw Color: The Circles of David Smith, ”  brought together nine sculptures from the series, the first time the works  had been assembled in one place in more than thirty years. “Raw Color” was also the first important exhibition of the sculptor’s work to be presented near Lake George since a retrospective at The Hyde Collection in Glens Falls was organized in 1973.)

To be sure, Smith had more than enough intellectual, personal  and artistic resources of his own to explore cycles and circles without the support of Carson’s writings.  Moreover, he had access to more profound and comprehensive thinkers treating the same subject, such as Seneca, the Stoic philosopher of ancient Rome whom Carson was also reading when she wrote “The Sea Around Us.”

It would also be the height of presumption to suggest that we know with certainty what is in any artist’s mind when engaged in the process of creation.

But as we look out on the fields, woods and lake and watch the approach of spring, it is interesting, for our own benefit,  to consider these intersections of art and science and how both are necessary to us if we are to not only understand, but to appreciate, the  earth’s re-awakening.