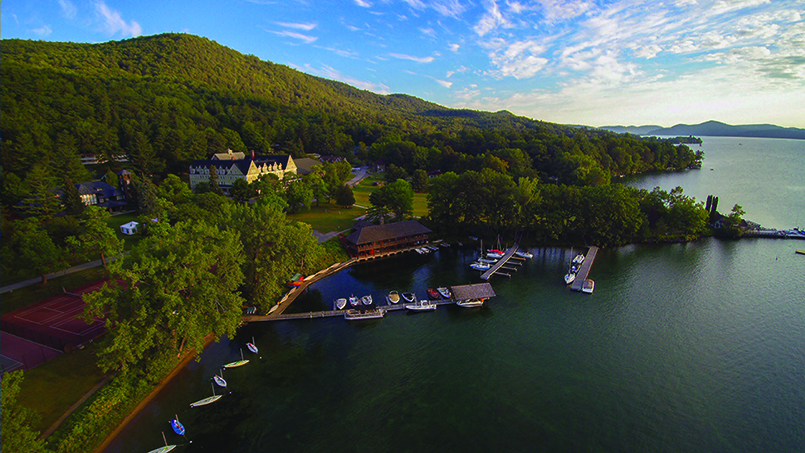 Best known as a YMCA conference center whose outreach to nearby communities extends to children, teens and families in need – including those suffering from cancer – Silver Bay is also a model for environmental stewardship.

Its new “green” conference center, with rooftop rain gardens and porous pavements that absorb rather than galvanize storm water, and the $3.5 million wastewater treatment plant that came on line last summer, have attracted the most publicity.

But as Steve Tamm, Silver Bay’s president and CEO, told the members of the Lake George Park Commission at its December meeting, a new storm water management complex is equally worthy of attention.

This past fall, Silver Bay completed construction of an artificial wetland between a busy road through the main campus and the lake. Other than the reconstructed wetland near the mouth of West Brook, which treats pollutants from a 64-acre paved, commercial corridor in Lake George, it is the only system of its kind in the Lake George watershed.

Built at a cost of $350,000, the wetland is situated on the site of a former parking lot that once served the entire campus.

“The parking lot was rather close to the lake, and we all know that cars drip fluids that are not good for the environment,” said Tamm.

After the parking lot was moved to a less sensitive site in 2016 – a lake-protection effort in itself –  engineers began designing a wetland to absorb runoff from Silver Bay’s buildings and roads and to prevent salt and other contaminants from reaching the lake.

“We were looking for ways to mitigate all that runoff to protect the Lake,” said Tamm. “The roads have a large impact on water quality. During a storm event, runoff passes over the roads and through the campus as it makes its way to the lake.”

Tamm continued, “So what we ended up doing, starting in 2018, was to work with the folks at the  Lake George Park Commission,  the Department of Environmental Commission and other government agencies to plan a constructed wetland.”

The storms that arrived on Halloween and caused extensive damage to roads and bridges in North Bolton and Hague demonstrated that the wetland works as it was intended to, Tamm told the Commissioners.

“Among other things, the stream from Jabe Pond that runs through the property to the lake overflowed.  All the sediment that would have been deposited in the lake went to the wetland instead,” said Tamm. “Our storm water devices did what they needed to do.”

Come spring, Tamm and his staff will know if the vegetation planted in the wetland to help filter runoff survived the storm intact or must be replaced.

“They were meant to withstand major events; our wetland specialist tells us that over the next year or two, the plants will have found an equilibrium, become firmly established and do all the things they’re supposed to do,” said Tamm.

As of this fall, birds, including a blue heron, were visiting the site and amphibians had started to colonize it, Tamm said.

This spring, he said, the Lake George Association will install educational signage that will help explain the role that wetlands play in protecting water quality, he said.

“The artificial wetland is a huge improvement over the pre-existing site,” said Walt Lender, the executive director of the Lake George Association. “Silver Bay has had issues with storm water over the years and this wetland is the ideal solution. Stormwater will be filtered before it reaches the lake, infiltrated rather than flowing overland, its nutrients absorbed by the vegetation.”

“A key part of our environmental mission is to ensure that we are good stewards of Lake George,” said Tamm. “And if you do the right thing for Lake George, you’ll bring smiles to the faces of everyone.”