Can the activism of citizens revitalize government agencies to better protect the Adirondacks? 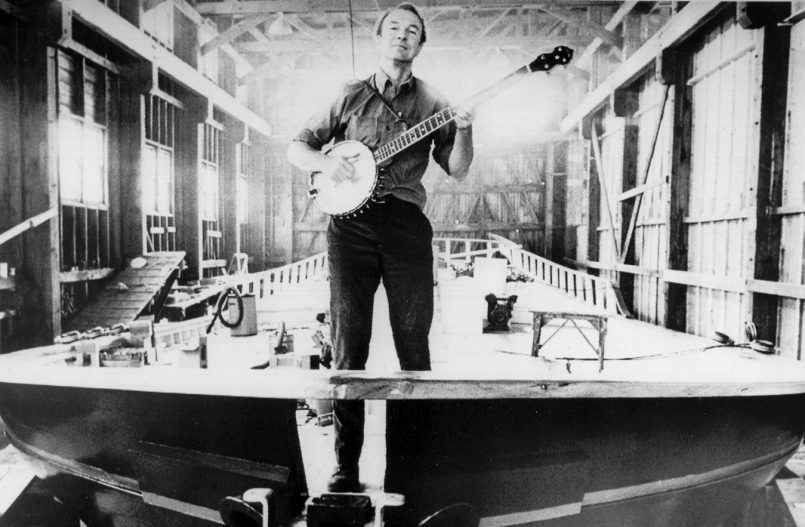 Pete Seeger on the Clearwater in Bristol, Maine, May, 1969, days before the sloop was sloop was to be launched.
By Anthony F. Hall

Pete Seeger, who died in 2014 at the age of 94 and whose music inspirited popular crusades for civil, labor and women’s rights, environmental conservation and peace, would, by any definition, be considered a public citizen.

As it happens,  public citizenship is a concept that factors heavily in a new book by Paul Sabin, “Public Citizens: The Attack on Big Government and the Remaking of American Liberalism.”   Sabin, a professor of history at Yale, shows us how the New Deal’s vision of liberalism as controlled progress – that is, progress managed by state and federal bureaucracies, the unions and industry – was reshaped into something less centralized and more aggressive by 1960s “public citizens” – activists, issue-based advocacy groups and public interest law firms.

Suspicious of when not overtly hostile to regulatory  agencies,  these activists, organizers and lawyers assumed the role of the people’s virtual  tribunes.

While Seeger lent his voice to groups such as Scenic Hudson and founded the environmental organization Hudson River Sloop Clearwater, it is unlikely that he considered himself a “professional public citizen” in the mode  of Ralph Nader, Jane Jacobs or John W. Gardner.

Nevertheless, Seeger’s passion for the beauty of the Hudson Valley may well have inspired administrators  such as Henry Diamond,  New York’s first Commissioner of Environmental Conservation,  to reimagine state government’s role in protecting our woods and waters.

The Activist Meets the Bureaucrat

Both Pete Seeger and Henry Diamond, I believe,  recognized that environmentalists of all stripes, grassroots activists, public interest lawyers  and government regulators,  were necessary if  their common purposes were to be achieved.

Both, at any rate,  were interested in meeting one another, so in late 1970 or early 1971 my parents brought them together at a dinner party at our house near Albany. It must have been over the holidays, because I was home from prep school (the same one attended by the Seegers’ daughter Tinya) and I remember the occasion.

The Department of Environmental Conservation, a  consolidation of the old Conservation Department, a Water Resources Commission and some environmental offices in both the Health and the Agriculture departments, was  created by Governor Nelson Rockefeller and the legislature on Earth Day, 1970.

Rockefeller envisioned it as a “Department of Ecology” and named Diamond, then a young lawyer who had been an aide to his brother Laurance, as its first commissioner.

That same year, my father sold his chain of weekly newspapers, the Lake George Mirror included, to become the editor of the new department’s magazine, The Conservationist.

I know that he and Diamond had become friends when both served on Governor Rockefeller’s Temporary Study Commission on the Future of the Adirondacks, but perhaps they had met earlier, when Diamond accompanied Laurance Rockefeller to Warrensburg in 1967 to float  the concept of an Adirondack National Park.

My father first met Pete Seeger sometime in the 1930s in Washington DC at the home of Clifford and Virginia Durr, fellow southerners who offered hospitality not only to idealistic young New Dealers but to people like Seeger, a Harvard drop-out assisting Alan Lomax collect Appalachian folk songs, and the aristocratic Jessica Mitford, the “red” member of a notorious British clan.

I suspect there was little or no contact between Seeger  and my father until the summer of 1968, when Seeger stopped by the newspaper office on Warrensburg’s Main Street to talk about the 75-ft Clearwater,  the replica of a Hudson River sloop that he was building in Maine to mobilize public opinion against water pollution.

(I still have the print of a Hudson River Sloop originally created for an advertisement for marine paints – the best illustration available at that time of that type of vessel – which he was selling to raise the $150,000 needed to complete the Clearwater.)

Seeger also stood outside the office and sang  “Newspapermen Meet Such Interesting People.”

(My older brother walked down to the office to meet him and learned, to  his dismay, that the folk singer hated the Byrds’ version of  his song  ‘Turn,Turn,Turn.)

What did Seeger, Diamond and the other guests, many of them DEC officials, discuss over the dinner table?

Seeger and my father had a mutual friend in  Carl Carmer, the folklorist who joined Seeger and others in forming Scenic Hudson, the citizens’ group that appealed the Federal Power Commission’s 1965 decision to grant Consolidated Edison a license to build a hydroelectric  plant at the foot of Storm King Mountain on the Hudson River.

I imagine that ConEd’s continuing struggle to build the plant was among the topics of conversation.

That proposal, sprung upon the public in 1962, was among the events that turned Seeger into an active environmentalist.

By the time Seeger and Diamond met, Scenic Hudson had already  appealed the Federal Power Commission’s decision to grant ConEd its license;

when a federal court agreed to award the group standing, the public’s legal right to intervene in land use conflicts was formally established.

The attorney for the citizens’ group, by the way, was David Sive, later an ally of the Adirondack preservationists whose mission was to maintain the integrity of the state constitution’s Forever Wild clause.

The Federal Power Commission, on the other hand, was a perfect example of the kind of New Deal regulatory agency that activists believed had become the captive of the very interests it was intended to regulate.

The federal Administrative Procedure Act of 1946 expressly limited the grounds for contesting a federal agency’s decision to economic impacts.

In the Scenic Hudson case, however, the federal court ruled that “aesthetic, conservational and recreational aspects of power development” might carry as much weight as other factors.

One year later, in 1966, New York State established something called the Natural Beauty Commission within the Office for Local Government, charged, in part, with the preservation of the state’s scenic resources.

And by 1971, administrators such as Henry Diamond had come  to realize (probably inspired by the passion of environmentalists such as Seeger and the energy of Earth Day) that the implicit powers of many state laws could be used to protect more than water quality, perhaps more than even public health and safety.  Laws could be used to protect “aesthetic, conservational and recreational” resources.

“In any permit proceeding before the DEC, we will look at the full environmental impact of the permit,” Henry Diamond said in 1972 about a proposed 4,000 unit development near Tupper Lake.

Diamond said that by looking at environmental impacts, “we can assess the environmental ramifications of a project as a whole before the earth is turned.”

This, he wrote in The Conservationist magazine in 1973, is “a new tool. This is what ecology is all about – assessing man’s total relationship to the environment. It is what the Department of Environmental Conservation is all about.”

According to Frank Graham’s political history of the Adirondack Park, the state courts upheld DEC’s right to deny the Tupper Lake development a permit,  “but criticized the department’s environmental impact assessment.”

The environmental impact statement is now at the heart of SEQR, or the State Envronmental Quality Review Act, which requires government and its agencies to consider scenic and historic resources, among other things,  when reviewing a proposed development.

Henry Diamond and the Protection of the Adirondacks

After the Storm King case,  Diamond became an advocate of the use of state resources to protect other special places, places like the Adirondacks.

As a member of Governor Rockefeller’s Temporary Study Commission on the Future of the Adirondacks, for instance, he supported empowering New York State to acquire scenic or conservation easements over environmentally significant and sensitive lands.

“Despite the legal complexities, the Commission feels strongly that the scenic easment approach offers the best hope of maintaining much of the Park as open space,” the members stated in their final report to the Governor in January, 1971.

New York State did not not adopt the Commission’s recommendation until 1984, when Governo Mario Cuomo signed into law legislation authorizing the use of public funds to protect privately owned and managed lands.

By then, Henry Diamond was far removed from New York politics and policies.  But according to the Department of Environmental Conservation’s website, nearly 780,000 acres of privately-owned lands in the Adirondack Park are now protected by state-owned conservation easements.

After the creation of the Department of Environmental Conservation and the Adirondack Park Agency in the early 1970s, independent, non-profit organizations came forward to monitor, prod and in some cases sue these state agencies when they stray from their mission or violate the state constitution.

With Governor Kathy Hochul’s appointment of John Ernst as chairman of the Adirondack Park Agency, perhaps the goals of the advocacy groups and the state agencies will  become better aligned, avoiding the unintended consequences of  conflicts between “public citizens” and “public authorities” that developed in the 1960s and 70s: “mistrust, making it harder for government to do big things,” “lack of new, pragmatic governing strategies,” “lack of support for government  in a way that could facilitate policy-making,” to use Paul Sabin’s phrases.

According to Sabin, while the public citizens’ attacks on the public authorities cast light on the inadequacies of the latter, those attacks also undermined the convictions of succeeding generations of liberals that government at every level could be a progressive force.

Henry Diamond’s belief that government had a positive role to play in protecting the Adirondacks is no doubt shared by Ernst, who has also helped guide advocacy groups such as the Adirondack Council in recent years.

With Ernst as the APA’s chair,  perhaps the agency will, to borrow another phrase from Sabin, “marshal the accountability provided by citizen activism and the collective power of government action.”