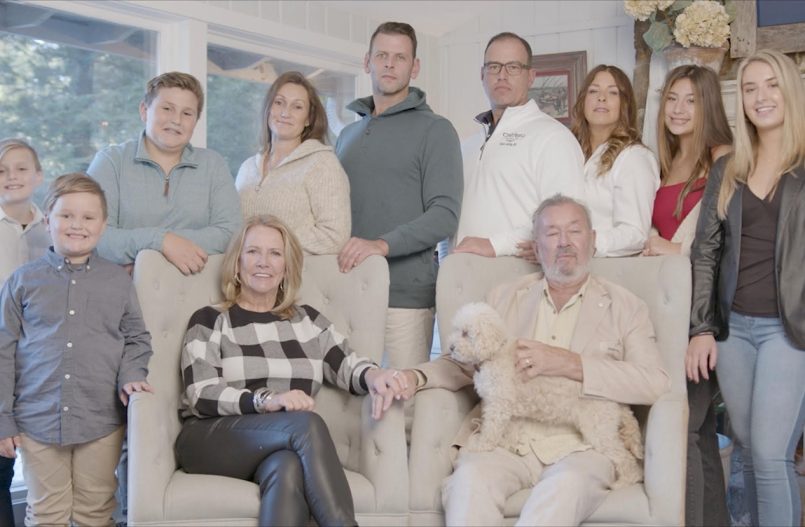 The families of Jesse and Jessica Foy and Jen and Bud Foy, Jr. with Cate and Buddy Foy.
By Anthony F. Hall

That 2020 reality show now has a successor.

Foy Rush, produced by Buddy Foy Jr’s own production company,  is a webisode series airing on YouTube, Instagram and Facebook. With 4 to 12-minute episodes scheduled to drop twice a week, “Foy Rush” is set in the family’s restaurants in Bolton Landing as well as on Anna Marie Island, Florida, where Jen and Buddy Foy, Jr. opened a new restaurant in December, 2020.

According to Buddy Foy, Jr., the focus of “Foy Rush” is the stress and uncertainty experienced by restaurant owners everywhere during the COVID-19 pandemic.

“Just like the rest of the country, we were overwhelmed, and we wanted to document the impact on our businesses. Shortly after it was announced the economy would be shut down, our cameras began rolling,” said Foy. “We didn’t know if we would be allowed to open. Jesse and Jessica’s Diamond Point Grill opened for take-out in the spring. Cate’s Italian Garden started offering take out. Our Chateau on the Lake couldn’t open for dining until mid-June.”

In addition to concerns about whether the restaurants would survive, the Foys were understandably nervous about the health of the family matriarch, Cate Foy, a cancer survivor.

“My dad, Buddy, Sr., was really nervous about Mom’s health. We wanted to save our businesses, but we certainly didn’t want to put anyone’s health in jeopardy, least of all my mother’s.” said Foy.

COVID-19 prevented the Food Network from returning to Bolton Landing to film a second season of “Summer Rush,” which released the Foys from any obligation to the network.

After vetting proposals from other producers, including one from “a major network” that the Foys concluded would portray the family in a negative light, Buddy Foy, Jr decided to produce the sequels himself.

“We’re good on our own. And to be honest, that’s how initially we wanted to go,” said Foy.

According to a press release, “‘Foy Rush’ documents the behind-the-scenes emotions and decision-making of Buddy, Jr. and his wife Jen along with his parents, Cate and Buddy, Sr. and his brothers, Keith and Jesse. ‘Foy Rush’ takes viewers on the turbulent business journey they experienced, from the first wave of closings to new and ever-changing rules and regulations of reopening, including masks, social distancing, partial capacities, curfews, indoor vs. outdoor dining, supply chain issues and worker shortages, among other things.”

After New York imposed a 10 pm curfew for restaurants, Buddy, Jr. and Jen decided to open another location in Florida, the press release stated.

“Once Governor Cuomo started going back and forth, as a result of which we lost a lot of money in products and food, we felt we had to look at alternatives to New York. I didn’t see business conditions changing in New York in the foreseeable future,” said Foy.

As Foy stated on television, where he appeared roughly 50 times on Fox and other networks, New York’s regulations struck him as overly burdensome.

“Our family’s restaurants served over 50,000 customers without any incidents of COVID. We felt the restaurants should have been able to remain open through normal hours of operation. We were especially sensitive to those regulations because there was so much demand for a restaurant. We turned away 150 dinners a night during COVID. That’s when we said, ‘let’s take this to Florida.’ And because our employees wanted to work, we took them with us,” said Foy.

Next year’s ‘Foy Rush’ will document the Foys’ latest venture, a new restaurant in Sarasota, Florida.