Peace to all Mankind

In a dark time in our nation’s history, a 72-foot spruce carried a message from the Adirondacks 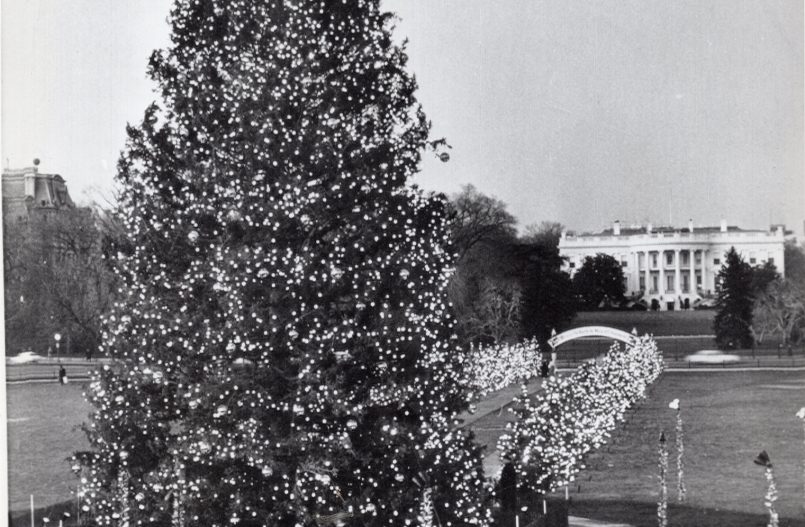 Before moving us to the Adirondacks in the fall of 1956 to become a country editor, my father, Rob Hall, had what must have been a rewarding though far from lucrative career as a left wing journalist. His 1955 reporting from the Sumner, Mississippi trial of the two men accused of killing Emmett Till is frequently cited by historians studying that watershed moment in the evolution of America’s conscience. Given my own, avocational interest in diplomatic history, I find his letters from London and Paris in the aftermath of World War II to be very instructive.

Nevertheless, his role in persuading America that it needed an Adirondack spruce for its 1964 National Christmas Tree seems to attract the most attention, especially at this time of the year.

I’ve written about that episode less than others have, so perhaps I can be forgiven for using this space to reconstruct what I know of that quintessentially small-town-America project.

A December 6, 1962 headline from the newspaper he owned and edited, “The Warrensburg-Lake George News,” reads “Spruce Picked for White House Lawn in 1964 Grows in Town of Chester.”

The initiative began two years earlier, in 1960, when he used his newspaper to launch a campaign to put an Adirondack tree on the lawn of the White House.

“It occurred to me that an Adirondack Christmas tree on the White House lawn would be good publicity for our region,” my father wrote in a reminiscence. “Alden Whitman, who wrote a column for the New York Times, picked up the story, and that gave us a needed publicity boost. (Whitman, by the way, was another disaffected Communist, whom my father had known in his previous life.)

My father assembled a committee that included representatives from the Adirondack Park Association (known today as ANCA), the Empire State Forest Products Association and the Adirondack Lumbermen’s Association, presided over by Bob Sweet, owner of the lumberyard north of Warrensburg. That group was tasked with selecting the tree.

Doug Luke, a forester with the West Virginia Pulp and Paper Co, spent six months searching for just the right tree. He found it on Landon Hill Road, between the hamlets of Chestertown and Pottersville, at the edge of what was then the town dump.

“This is our choice,” Sweet told the newspaper. “It is a magnificent tree which does credit to the Adirondacks and the nation.”

It also met the requirements of the National Park Service; to be eligible for display on the White House lawn, a tree had to be symmetrical and at least 60 feet high. This one was a towering 72 feet, and after two years of pruning, spraying and fertilizing, as symmetrical as one could wish. Local historian Maury Thompson, writing about the tree for “Glens Falls Living” last year, noted, “Rudolph R. Bartel, assistant regional manager for the National Park Service, inspected the tree and certified it was fit for the limelight.”

“This tree is a magnificent specimen, and I’m especially pleased with its health and the care it has received,” Bartel said, according to the local newspapers.

Journalist Thom Randall, who wrote an article about the tree for the “Post-Star” in 2004, states it was planted in the 1880s by one Buel Robinson.

November 27 was chosen to be the day on which to fell the tree and send it on its way to Washington DC.

Two days earlier, my father was sitting his newspaper office when a telegram arrived late in the evening from Governor Nelson Rockefeller.

The Governor would be unable to attend the tree cutting ceremony, as originally planned; however, he wished the following to be read in his absence: “It is a source of great pride to me and I am certain to all residents of the Empire State, that a product of our own great forest should become a national Christmas tree. This magnificent spruce which is today to be felled and later erected on the White House lawn shall stand as a symbol of peace and our nation’s faith in our creator. My congratulations to all who have assisted in the selection and transportation of our National Christmas Tree.”

Warren County’s state assemblyman, the late Dick Bartlett, was chosen to take Rockefeller’s place as featured speaker, to read the telegram aloud and to represent him.

A little girl, aged about four, first stepped through the crowd and, placing the decoration on one of the boughs, said, “This is for the President.”

(The late Walt Grishkot, the local photographer and publicist best known as the founder of the Adirondack Balloon Festival, once told me that Doug Luke – at his suggestion – recruited the daughter of some friends to enact the ceremony.)

Bartlett then made the first, ceremonial cut with a chain saw.

“At that point, there was a little confusion,” my father wrote in his reminiscence. “Howard LaRose’s crane lost power and the tree wobbled. The workmen aloft in the tree had a bad moment, but at last the tree was down, to be hoisted upon one of Paul Hillman’s flatbed trucks and carried to Washington.”

At each stop along the way, reporters and photographers asked to see the little girl’s ornament.

(Walt Grishkot said that a box of duplicates was kept in the truck’s cab and replaced at each stop.)

The little girl became such a celebrity that she received an invitation to the tree lighting ceremony by President Johnson himself.

One retrospective account states, “the little girl’s name has been lost to history.”

But that is not the case. Her name was Andrea Cushman; she still lives in Glens Falls, married to art gallery owner Brian Blackburn.

Asked about the ceremony several years ago, Andrea Blackburn said that she enjoyed her moment in the spotlight, “I have very pleasant memories of the event,” she said. “I was a shy child and I was proud to have played a role in the send-off of the Adirondack tree to the White House.”

She was especially pleased by the invitation to attend the ceremony in Washington, and regretted that her parents wouldn’t allow her to attend.

As Rockefeller stated in his telegram, the tree was to be interpreted as a symbol of peace. The tree literally bore a message of peace; as it left the North Country aboard the Hillmans’ truck, Pottersville sign painter Forrest Jones attached a sign proclaiming: “Peace to all Mankind.” Grishkot said authorities demanded that the sign be removed, considering it an overt political statement.

Given the moment, however, it was an appropriate one, and one reflecting, I would like to think, the sentiments of the North Country. The war in Vietnam was escalating, with any chance that it would end or be won soon rapidly disappearing. Moreover, the Cold War weighed heavily upon the nation’s mood, still darkened by the Cuban missile crisis.

President Lyndon Johnson was expected to endorse the Adirondacks’ message of peace.

On December 18 at 6:15 pm, the president pushed a button and 7, 500 red and white lights suddenly illuminated the tree, which was decorated with 5,000 ornaments and crowned with a cross rather than a traditional star.

Johnson then addressed the audience, which included his family, Vice-President Hubert Humphrey and assorted cabinet members and high ranking officials.

“These are the most hopeful times since Christ was born in Bethlehem… By his inventions, man has made war unthinkable, now and forever more,” the President stated.

To this day, it disturbs me that someone would think the policy of Mutually Assured Destruction a fit subject for a President’s Christmas address.

Still, Warren County’s tree was such a success that five years later the county sent another Christmas tree to Washington – the only county in the country ever to send two trees.

He was there when President Richard Nixon thanked the people of “Warren, Ohio,” a remark that failed to win Nixon many friends in Warren County, New York. (Even our Congressman at the time, Carleton King, was heard to say, “Nixon blew it again.”)

Co-incidentally, or perhaps not, the gaffe marked the beginning of the end of my father’s association with the Republican Party, which presupposed anti-war liberals such as Jacob Javitts and Charles Goodell in leadership positions.

“Walt Grishkot’s wife Joan went up to Nixon to inform him of his mistake. She said he looked flustered but had no answer,” my father wrote. “In any case, it is understandable that “The Warrensburg-Lake George News” never lifted an editorial finger to defend him from impeachment.”