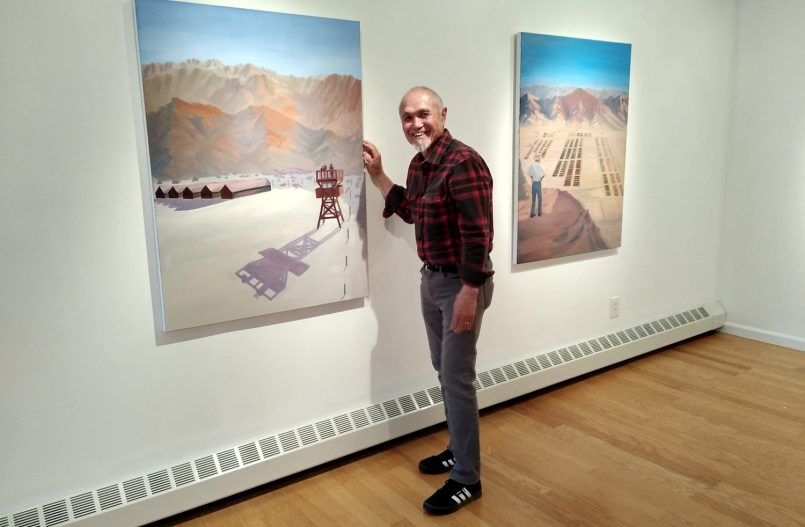 Paul Akira Miyamoto is a painter whose departure from abstraction – whether it be a sabbatical or permanent – has produced a body of work that is at once personal and political, steeped in history and of the moment.

“Go Home,” his new solo exhibition, is on view at the Lake George Arts Project’s Courthouse Gallery in Lake George Village through June 5.

It is an interpretation, or a version, of the forced removal of more than 110,000 Japanese American men, women, and children to remote detention camps during World War II, far from their homes on the West Coast

As it happens, Miyamoto’s grandparents, parents and a sibling were among the 110,000.

The paintings are divided into two sections “Farm” and “Camp,” and arranged at opposite ends of the gallery.

The paintings tell the story of Miyamoto’s family and the story of those who, like them, were imprisoned for the duration of the war on the basis of nothing more incriminating than national origin, despite the fact that they had labored in America for decades.

Between “Farm” and “Camp” is an installation representing the tar-paper barracks where the interned families were housed, which also helps to evoke, in an unmediated way, the barely humane treatment they endured.

“As I learned when I moved to New York from California, surprisingly few people knew about the internment of American citizens during the war. My story hadn’t been told. So I wanted to create a narrative, one that people could interact with,” said Miyamoto, a former RPI professor living in the Hudson Valley.

To create that narrative, Miyamoto not only had to travel from abstraction to representation; he had to reimagine landscapes already fading from view, reconstruct half-remembered stories and confront a legacy he had deliberately avoided.

“As a teen-ager in the 1950s, I just wanted to be another American. I didn’t want to learn the Japanese language. I wanted American food. The experience of my grandparents and parents was not my experience. I wanted to put that behind me,” he said.

With “Go Home,” Miyamoto is able to confront that legacy directly.

As he writes in a statement drafted for the exhibition, “My paintings reflect a relationship to the geography of my past and the silent rage and emotional shame that earlier generations were never able to express. The mountains illustrate the barriers to independence, the furrows signify the possibility ofregeneration, and the clear, expansive skies invite hope for the future.”

Courthouse Gallery director Laura Von Rosk said she was unaware that Miyamoto would be exploring these particular themes when she invited him to exhibit in Lake George.

“I really didn’t know what Paul would do. But he is a really strong painter whose work I admire. These landscapes, like all his work, are beautiful and mysterious. And although they’re loaded with uncomfortable history, they’re not uncomfortable to look at,” said Von Rosk.

“In America’s response to Japanese aggression during the second World War, we forgot about these people who came to America looking for a better life, who became loyal citizens,” said Miyamoto.

“The drumbeat of violence reverberates through history, over and over again,” said Miyamoto.

Miyamoto earned his Master of Fine Art and Bachelor of Fine Art degrees at Otis College of Art & Design in Los Angeles, California. In addition to hisstudio art practice, he was a Clinical Professor of Visual Communication at RPI for more than 20 years and still maintains a graphic design practice.

The Courthouse Gallery is located in the Old County Courthouse at the corner of Canada and Lower Amherst Streets, Lake George, NY. Hours during exhibitions are Wednesday through Friday 12 to 5 pm, Saturday 12 – 4 pm, and at other times by appointment. For information, call 518-668-2616.