Look Who’s Fifty: Celebrating the Launch of the Minne-Ha-Ha 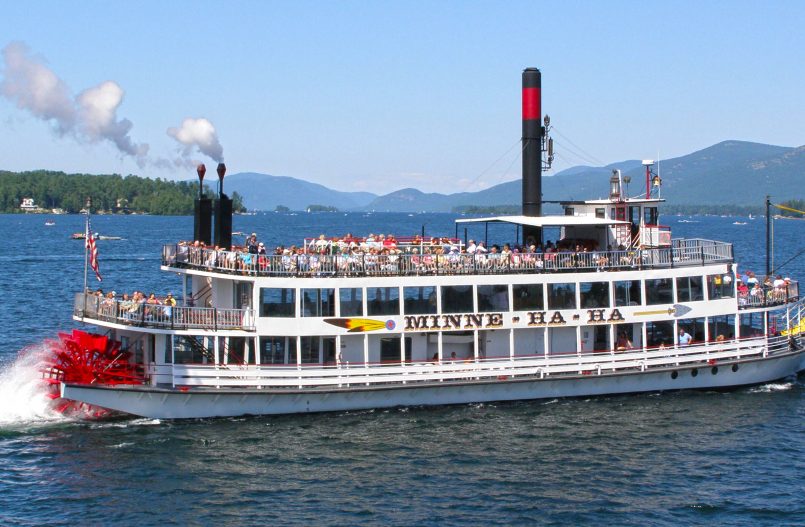 Every day, every hour or so, the Minne Ha Ha departs the Steel Pier, its chirping steam whistles, calliope licks and the bright foam of its paddle wheel suffusing the air with a holiday sweetness. Difficult as it may be to believe, it’s fifty years old this summer.

Or, rather, we should say “she,” According to Bill Dow, president of the Lake George Steamboat Company, which owns and operates the Minnne-Ha-Ha, “there’s something special about boats. They’re meant to be treated well, with respect. Perhaps that why we refer to everyone of them as ‘she.’”

Construction began in 1968, at the Steamboat Company’s Baldwin shop at the foot of the lake and at the Steel Pier in Lake George Village.

“The Minne-Ha-Ha was intended for short cruises, strictly in the lake’s south basin. The Mohican and the Ticonderoga were making length-of-the-lake cruises,” said Dow.

The Minne is the only stern wheel paddle boat ever to have sailed Lake George, and contrary to misconceptions, she is propelled by her paddle wheel and powered by 200 hp, custom-built  steam engines. From her boilers also comes the steam for the brass whistles of the calliope, whose music is as an inherent – and indefinable – part of any bright summer day on Lake George as the sight of the Minne’s red paddlewheel.

“The Minne is the real thing,” said Dow.

According to Dow’s own history of the two hundred year old Lake George Steamboat Company, “Mountain Steamboats,” his father, Wilbur Dow, recognized that modern vacationers, especially those with children, had less interest in longer trips (of the sort made by the Mohican and the Ticonderoga) and more in short cruises.

“Wilbur Dow believed that the new vessel should be an attraction in itself and should  employ steam propulsion. Logically, a steamer might follow the sidewheel tradition of the old lake boats, but the proposed boat was to be roughly 100 feet in length and a sidewheeler, so short, would appear ungainly,” Dow writes.

After a christening ceremony on July 30, the Minne began daily service on August 1, 1969.

Later this month (or early next month) a fiftieth birthday party will be held aboard the Minne-Ha-Ha with banners, balloons, music and dancing.

It will fall near another anniversary – the day in June twenty years ago when the Minne hosted a party to celebrate her reconfiguration and extension by 34 feet.

“We cut her in half and separated the two halves by 34 feet, the exact length by which she was to be extended,” Dow said in an interview in his office above the pier.

The two forward stacks were removed and replaced a larger, single stack. A propeller and an auxiliary engine  and an elevator for handicapped access were added in the process.

“We wanted to make the boat more manueverable, but mostly, I wanted to change the appearance,” said Dow.

By naming the new vessel the Minne-Ha-Ha, the Steamboat company continued a tradition of perpetuating the names of earlier boats.

From 1857 through 1877, the Lake George Steamboat Company operated the first Minne-Ha-Ha, a 144 ft. sidewheel steamer.

Like the Minne II, her name came from Henry Wadsworth Longfellow’s 1855 poem “Song of Hiawatha;” whose hero marries the princess Minne-Ha-Ha, supposedly a translation of  “laughing waters.”

Although designed and built as an excursion boat for tourists, the Minne has also served the lake in other ways.

In 1973, for instance, she took part in an event billed as “environmental boat races” by the Lake George Chamber of Commerce, featuring small steam-powered launches and electric boats.

And just a few years ago, she became a research vessel for the Jefferson Project,  the environmental monitoring system developed by IBM, RPI and The Fund for Lake George.

An Acoustic Current Doppler Profiler (ADCP) was attached to the starboard side of the Minne’s hull. As she made her daily circuit, she was also measuring the velocity of water currents at multiple locations, the outlets of three of the lake’s largest tributaries among them. That data was incorporated into the circulation models that help scientists understand how water moves through the lake.

Whatever her uses, the Minne’s ultimate value is her importance to the people who board her for a cruise, said Patricia Dow, steamboat company owner and manager.

“She’s so bound up with people’s experience on the lake and their memories of the lake. People board the Minne with their children and think of their parents, who first brought them aboard. By celebrating her anniversary, we’re really celebrating what she means to people,” said Patricia Dow.