Lake George to Become a Global Laboratory for Climate Change

As Jefferson Project’s co-founder turns his attention to climate change, he foresees Lake George as a node in IBM’s international research project 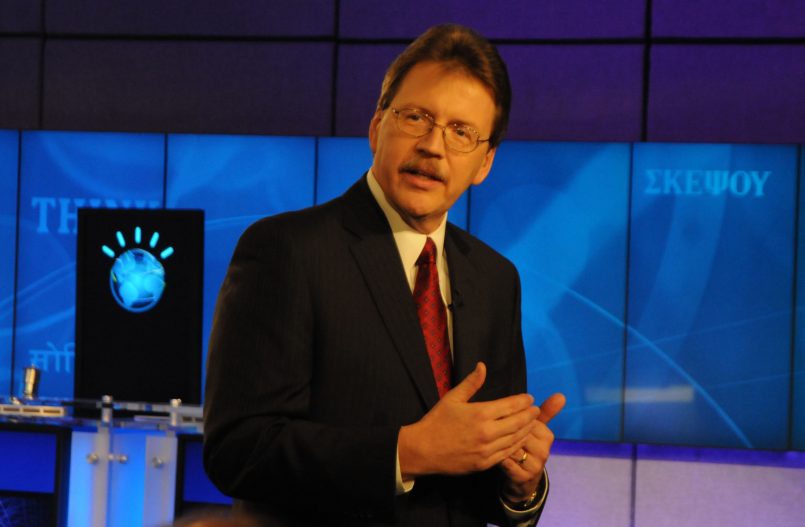 John E. Kelly III, IBM Senior Vice President and Director of IBM Research introduces IBM's Watson computer system to the media during a press conference at IBM's Watson Research Center in Yorktown Heights, NY on January 13, 2011. Watson will compete against Jeopardy!'s two most successful and celebrated contestants -- Ken Jennings and Brad Rutter -- in the first-ever man vs. machine Jeopardy! competition, which will air on February 14, 15 and 16, 2011, with two matches being played over three consecutive days.
By Anthony F. Hall

Thanks to the Jefferson Project, the collaborative effort of IBM, RPI and The Fund for Lake George, Lake George  is now the most extensively monitored water body in the world.

“Lake George is, by far, the smartest lake in the world,”  John E. Kelly, III, the executive vice president of IBM, told the annual meeting of The Fund for Lake George, held July 6 at the Sagamore resort in Bolton Landing.

Data from 500 sensors within the lake, in tributaries and around the watershed, monitor minute by minute changes in runoff, chemistry and circulation.

Using the same sensors monitoring stressors from local sources, the IBM can start detecting changes in biology, temperature and other indicators of climate change, said Kelly.

The Battles to Protect Lake George Can be Won.  The is in War is in the Balance

As a result of the Jefferson Project, scientists and policy makers on Lake George are better informed than anyone elsewhere about how road salt leaches into a fresh water body and what causes Harmful Algal Blooms – and how to anticipate them and deflect their worst consequences.

Fed by data from the sensors, RPI’s scientific research and more than thirty years of  water quality data collected by the Darrin Fresh Water Institute, a “scenario engine” created by IBM engineers and mathematicians now enables policy makers to look into the future and predict the consequences of loading the lake with more nutrients or pollutants, Kelly said.

“Using a hundred or more indicators of water quality, we can model what could happen to the lake in the coming years and in the coming decades, given various assumptions about human inputs,” said Kelly. “It’s the most sophisticated model for a freshwater body that I know of.”

“From a policy perspective, the value of being able to forecast changes is that it allows us to take effective preemptive actions to ensure lasting protection,” said Eric Siy, The Fund’s executive director.

As a result of these advances, “with the technology we’ve deployed and the partnerships we have created with RPI and The Fund, with the dedication to this lake, we can reduce the levels of salt entering the lake, we can prevent the spread of invasive species and we can keep the community informed about dangers we need to watch for, about what we should and shouldn’t do if Lake George is to be protected. I think of these as battles we are winning for the water purity of this lake,” said Kelly.

But, Kelly added, “The question is, will we win the war?”

In the Long-term War for Lake George, the Enemy is Climate Change

The war is against  “the many, many things that are happening over the long term that not even our children, our grandchildren or their grandchildren will face; it’s what will happen to the lake in 50 or a hundred years due to, not to road salt or some other form of pollytion that we on Lake George can prevent, but climate change,” he said. That’s what we’re starting to contemplate.”

To mention only the most obvious: the abbreviated freezes on the lake, where ice forms later than it once did and departs the lake sooner than it did in years past.

Historical ice-in/ice-out data, scientists say, is an undeniable sign of warming in the winter seasons

“We know that the number of winters that the lake is icing over is decreasing.  And that’s happening the world over,” said Kelly. “I was at Lake Zurich recently and a driver told me, ‘I’ve lived here all my life and the lake is not icing over the way it used to.’”

According to Kelly, that conversation led him to wonder whether research in Lake George and in lakes all over the world can be incorporated into one global study of climate change and its effects on fresh water ecosystems.

using the same sensors monitoring stressors from local sources to detect changes in biology, temperature and other indicators of climate change.

Any trends in urban runoff, waste water pollution or invasive species will be exacerbated by climate change, and according to Eric Siy, IBM’s scenario engine will enable policy makers on Lake George to better adapt to more intense storms, abbreviated winters and other consequences of climate change.

But Lake George’s most important role in combatting climate change will lie in persuading national and international leaders that forceful action must be taken if the worlds’s fresh water sources are not to be compromised further, said Kelly.

“We can begin informing the activities of global institutions seeking solutions to climate change. This is an ambitious goal for Lake George,” said Kelly.