Limestone for Brooklyn, Oysters for Essex

Canal schooners were key to unlocking the wealth of the Champlain valley. 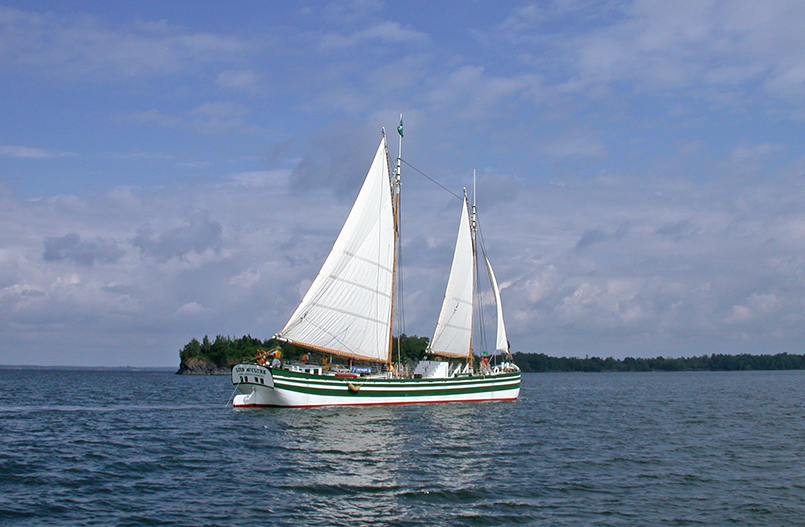 Much of the blue limestone used to construct the New York State Capitol and the Brooklyn Bridge was quarried from the shores of Lake Champlain. The massive stones were sent across the lake, through the Champlain Canal and down the Hudson River aboard canal schooners, vessels with collapsible masts unique to this transportation corridor. Long neglected, these sailing canal boats are now receiving the attention of historians and archaeologists.

“They were the tractor trailers of the day. The economy could not have functioned without them,” says Chris Sabick, the archaeological director of the Lake Champlain Maritime Museum in Vergennes, Vermont, who has spearheaded an effort to protect the wrecks that lie at the bottom of Lake Champlain and the Hudson River.

According to Russell Bellico, the Hague resident who wrote about sailing canal boats in his book “Sails and Steam in the Mountains,” the boats not only transported cargoes of stone, iron, coal, lumber and agricultural commodities to urban markets, they brought the world’s luxuries and manufactured goods to communities on both sides of Lake Champlain.

Thanks to Sabick, Bellico, their fellow historians, archaeologists and colleagues, the waters plied by these boats (including sections of the Champlain Canal that were built into the Hudson River in Warren County) will soon comprise a federally recognized historic district.

Containing the wrecks of specific canal boat types, some of which are the only known examples of their kind, the waters are among the best sources of information about the shipbuilding technology of the era, said Sabick.

Russ Bellico adds that, by “protecting these underwater preserves,” we will learn more about the sailing canal boats’ “role in the economic history of the Champlain Valley.”

The wrecks that lie at the bottom of those waters will also be placed on historic registers and protected from intentional harm.

“Vessels sank for a variety of reasons: storms, structural failure, collisions, fire, negligence. Many appear to have been intentionally sunk or abandoned along the lakeshore,” said Sabick.

According to Sabick, the wrecks are in various states of preservation, some partially submerged, others half buried in sediment.

The wrecks merit places on the National Registry of Historic Places, said Bellico, “because they allow researchers to better understand the nature of these hybrid boats and their contribution to the growth of America during a period of extraordinary change.”

The Canal Schooner: a boat for all waters

Canal schooners evolved to take advantage of the construction of the Champlain Canal.  Completed in 1823, the canal connected Lake Champlain with the Hudson River and the Erie Canal and opened the Champlain Valley to the national and even international marketplace.

(The need for such a canal was self-evident. In the 1780s, the early settler William Gilliland mused, “how much more valuable (our lands will be) when inland navigation (is possible).”

On the open waters of Lake Champlain, the captains unfurled the sails. Upon reaching the canal, centerboards and leeboards were retracted and masts were lowered and laid flat; the vessel was transformed into a typical canal boat, towed by horses or mules.

“No longer did the investors and merchants have to ship their cargo to Whitehall, load it onto wagons and have it dragged 45 miles to the Hudson River, where it would be loaded onto another boat sailing down to New York Harbor,” said Sabick. “You could load up at the dock in Essex or some other inland port and send the cargo directly to market, saving time and money.”

Because the canal schooners did not need to be towed while sailing the lake, owner-operators had more independence, said Russ Bellico.

According to Bellico, many owner-operators lived on board the boats.

According to Sabick, the construction of the canal and then its expansion in the 1860s and 1870s, which accommodated even larger canal schooners, reduced the costs of shipping goods to market by 90%.

Wrecks shed light on the region.

The canal schooners were key to unlocking the wealth of the Champlain Valley, said Sabick.

Studying the remains of the boats that lie beneath the waters’ surfaces enables scholars to connect archaeological evidence to the stories of the families who owned and operated the boats, to the communities that prospered from the canal trade, to the local economy and the culture it produced, he said.

“We know these vessels had a huge impact on commercial activity in the Champlain valley,” said Sabick. “We can study census records and learn how many people were employed in canal related-work, from boat building to cargo handling to boat operations. Essex, for instance, was a center for canal boat construction.”

Sabick continued, “We’re learning a lot about how people lived in the Champlain Valley. A wreck found near Port Henry loaded with iron stoves and cookware manufactured in Troy provides us with information about the kind of cargo the boats brought back to the Champlain Valley. We have evidence the boats even carried raw oysters, harvested from New York Harbor and brought back to be sold here.  That’s fascinating information and well-worth studying further.”

This summer, visitors to the Lake Champlain Maritime Museum in Vergennes, Vermont, can tour the replica of an 1862 canal schooner, the 88-foot Lois McClure.

Constructed in Burlington, Vt., and launched in 2004, the Lois McClure is based on the larger canal schooners built after the canal was enlarged in the late 1850s to match the dimensions of the Erie Canal, which the state had expanded in the years between 1834 and 1862.

Boats the size of the Lois McClure could carry more than 100 tons of cargo.

Next summer is the Lois McClure’s last; she is to be dismantled at the end of the 2022 season.