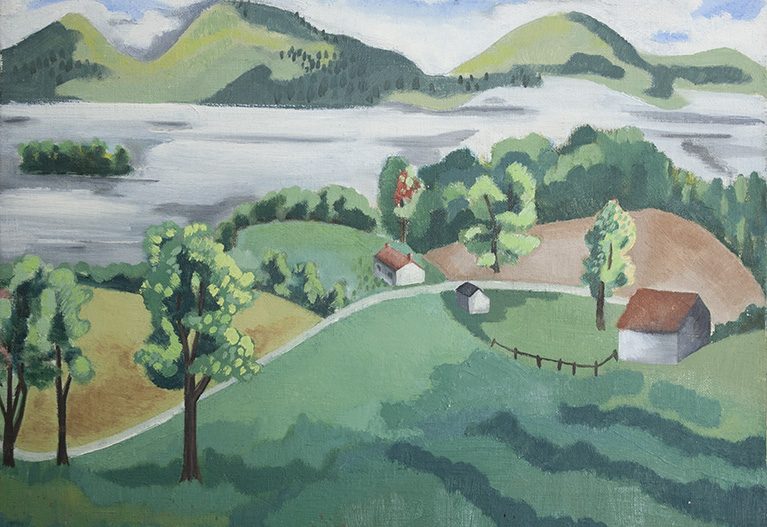 “Landscapes Lost and Found: Two Centuries of Art from Bolton Landing”  opens at the Bolton Historical Museum on May 25 and will remain on view through Columbus Day. Above David Smith, Untitled, 1936.

Co-incidentally, it is one of several current exhibits along the eastern seaboard examining our relationship to nature and the environment through tightly focused looks at  particular places.

Among them: the New-York Historical Society’s “Hudson Rising,” a comprehensive exhibit of the river and its ecological changes; “(Im)Possibilities of  Landscape” at Bennington College, which explores the representation of the  landscapes of southern Vermont; “Thomas Cole’s Refrain: The Paintings of Catskill Creek,” which studies in exhaustive detail Cole’s Catskill Creek paintings, at the Thomas Cole House in Catskill, NY; and “Harold Weston: Freedom in the Wilds,” on view at the Shelburne Museum in Shelburne, VT, situating Weston’s art and environmental activism squarely within the Airondacks.

While large scale exhibits have also examined these issues (most notably, “Nature’s Nation: American Art and Environment,” which recently travelled from the Princeton Art Museum to the Peabody Essex Museum in Salem, MA), it is through a localized lens that we best see ourselves and our impact on the environment. A landscape, of course,  is a representation of what a community has created, destroyed or preserved. That being the case, we must learn as much as we can about the climate, geology and the flora and fauna depicted by the artist if we are to assess our cumulative, historical effect on our surroundings.

As the novelist Russell Bank writes, “To know a place, you have to love it.”

That, presumably, is why the organizers of this show have chosen to explore their own communityy, Bolton Landing, a small resort town which is, nonetheless,  home to a remarkable artistic legacy.

The artists represented in “Landscapes Lost and Found” include painters of some of the earliest Lake George landscapes, second generation members of the Hudson River, Luminist and American Pre-Raphaelite movements and twentieth century modernists Weber Furlong, John Graham and Dorothy Dehner as well as David Smith, commonly regarded as the greatest American Sculptor of the 20thCentury. Well known and highly regarded contemporary artists working in the Lake George area – Bruno LaVerdiere, Victoria Palermo and Rebecca Smith – complete the show.

An auxiliary show, “Sculptors’ Studies from the Prospect Mountain Show”, which includes drawings and other materials related to the 1979 outdoor “Prospect Mountain Sculpture Show: An Homage to David Smith,” is installed in an adjacent gallery, recreating a conversation about art and nature between Smith and now-prominent  artists such as Mark di Suvero.

He reminds us, if we indeed need to be reminded, that a landscape painting is also a deeply personal response to a particular place.

In “Landscapes Lost and Found,” we are shown this most clearly in six landscapes of Bolton Landing and Lake George that Smith himself painted in the 1930s, one of them when he was living in Athens, Greece.

These paintings have never been exhibited before and are likely to generate broad interest among those interested in art, especially in the work of a 20thcentury master.

(Quest, the New York City-based national magazine, for example, devotes six pages to the paintings in its June issue.)

To at least one scholar, the paintings are reminiscent of Cezanne’s paintings of Provence. That is not surprising. Like Cezanne sixty years earlier, Smith was in search of a summer studio, a place where he could escape the city’s   distractions, discomfort and expense while continuing to make art.

At the invitation of Weber Furlong, an administrator at the Art Students League who had established an artists’ colony on a farm overlooking the lake, Smith and his first wife, Dorothy Dehner, began visiting Bolton Landing in the 1920s.

(Georgia O’Keeffe and Alfred Stieglitz, who also spent summers on Lake George, brought John Marin to the colony in 1927, a visit that inspired several of his paintings of the lake.)

Weber Furlong is attracting renewed interest as a path-breaking modernist, and her work, as well as that of her husband Tomas Furlong, Dehner and others who spent their summers with her, such as John Graham, are well-represented in this exhibition.

People in the Landscape

Weber Furlong, who died in Glens Falls in 1962, is best known for her still life paintings.

A surprise and a source of pleasure here is her colorful, abstract yet recognizable landscape inspired by the view from Golden Heart Farm, the name given by the  Furlongs to the 19thcentury homestead  on Federal Hill which they purchased in 1921 and turned into the artists’colony.

(Another view from the farm  can be seen in an especially fine piece by Elsa Steinbach, the Bolton Landing resident who died in 1997.)

Golden Heart Farm is privately-owned and inaccessible to visitors. One can, however, sense what life was like there by the exhibition’s series of pen and ink drawings made by Weber Furlong before the property was sold in 1952.

Reproductions of Dorothy Dehner’s “Life on the Farm” paintings, from the 1940s, also help one appreciate the community that flourished within these particular landscapes, as does her painting of a birthday party at a neighbor’s home.

(Apparently, the exhibition’s organizers recognized that we cannot begin to discuss  our impacts upon landscapes without showing people working, playing and at rest in these same landscapes.)

While 19thcentury painters represented Lake George as one of many possible  manifestations of something spritual, eternal and universal (or, by the 1870s, one of many possible responses to the art market of the day), the paintings of David Smith and others  exhibited here render a specific, identifiable place rather than a vague, amorphous ideal.

These different treatments of the same view can be attributed in part to changes in the landscape. But also, no doubt, to differences in philosophy and even politics. As Thomas Cole himself emphasized, landscapes are composed, not copied. Be that as it may, a walk through the Bolton Historical Museum’s galleries is a pictorial narration of Bolton Landing’s history, from wild forest to farmland and beyond, to second-growth woods and second homes.

Outdoor sculptures by Barney Bellinger, a magnificent steel sculpture by David Smith from 1963 titled Menand VII and a 1957 work of his on paper, as well as pieces by Peter Schwarzburg, Bruno LaVerdiere, Rebecca Smith and Victoria Palermo remind us  that figurative representation is not a prerequisite for the study of landscapes.

However abstract Rebecca Smith’s sculptures may appear, they are an especially explicit discussion of  human impacts on the landscape.

The pieces  in “Landscapes” are renderings of invisible, odorless greenhouse gasses responsible for climate change.

“I felt that if you can see it, in some form, then perhaps you can understand it. And if you understand the science, then you get it, that is, the significance of the issue,” said Smith.

The Local and the Global

Smith’s ability to discuss the impacts of climate change through art suggests why the proliferation of exhibitions about man’s  relationships to the environment may not be the result of happenstance after all.

Within the past six months, we have seen the release of the US Congress’ “National Climate Assessment-Impacts, Risks, and Adaptation in the United States” report and the United Nations’ biodiversity assessment.

The first presented the best evidence to date of the consequences of climate change for the United States. The second reported that one million species are threatened with extinction, not only because of climate change, but also because of pollution and invasive species.

Both remind us that we experience the impacts of these trends not as abstractions or as political dogma, but as changes in the landscapes – and lake – we care most about.

If the organizers of this art exhibition wanted to goad us into action, they could not have done better than to present us with so many evocations of one particular, beloved place.

The Bolton Landing Historical Museum, which is located at 4924 Lake Shore Drive, is open only on weekends until July 4. For information, call 518-644-9960.

Editor’s Note: As a sponsor of “Landscapes Lost and Found: Two Centuries of Art from Bolton Landing,” the Lake George Mirror will publish more detailed articles about the art and artists represented in the show, just as we did in 2005 when the newspaper was a sponsor of The Hyde Collection’s “Painting Lake George” show.