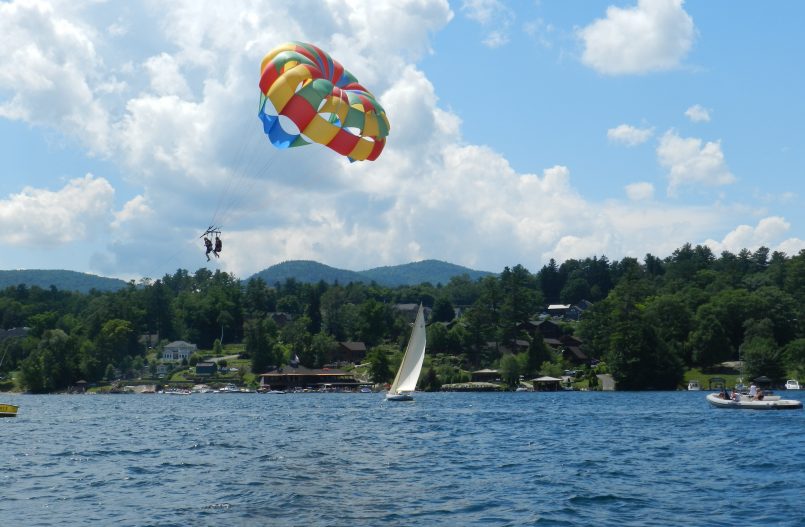 Regulations, judgement, compromise, education  and, when necessary, legal action, are all parts of the toolkit

Given its size, Lake George can, in theory, comfortably accommodate 4,500 boats at any given time; but even at peak times, a Saturday afternoon in August, for example, no more than 2,500 boats will be on the lake.

In fact,  between 2005 and 2015, the number of boats on the lake on a midsummer, weekend afternoon appears to have declined by as much as 20%.

That may account for the fact that when boaters were last surveyed –  in the summer of 2015 – more than 90% of them said they were satisfied with their experience.  Of those  who said they were dissatisfied, almost one third said it was because the lake was overcrowded.

That perception appears to be growing, despite the fact that the number of boats on the lake has not increased significantly in the years since the 2015 study was released, says Lake George Park Commission’s  Dave Wick, the head of the agency that conducted it.

“Everybody says there’s so many more boats out there. It’s just not true. The numbers don’t bear that out,” said Wick.

The numbers of boats at eight bays on Lake George – not surprisingly, the most popular spots on the lake – do exceed those bays’ capacities, at least according to a formula that says every boater needs at least 13 acres to himself to boat comfortably and safely.

Obviously, the potential for conflicts among marinas, homeowners and boaters is greatest in these bays.

Last spring, for instance, after considering a proposal that limited a water sports company’s  use of Bolton Landing’s Huddle Bay  to specific hours and debating whether to deny the company a permit altogether, the Lake George Park Commission decided approve a permit, but with the stipulation that it was to be subject to review within a year.

At issue was the use of Huddle Bay, identified by the 2015 Water-Based Recreation Study as an area where use exceeds carrying capacity.

Lt. Joe Johns, the Commission’s director of  Law Enforcement, told the Commissioners that the Marine Patrol received “multiple complaints over the years from residents and resorts about activity in the bay,  including skiing too close to docks”

This past year, homeowners in nearby north Basin Bay have been  challenging an effort by Frank Passaro to offer marina services at his Cool Ledge resort, which, apparently, he has been doing without the authority of the Town of Bolton or the Lake George Park Commission.

To secure the right to lawfully offer marina services, such as leasing of dock spaces and berthing charter boats, Passaro must either prove the  resort ran a  marina before decades-old regulations prohibited such activities (and that his marina is, in land use parlance, “a pre-existing non-conforming use “),  or win a variance from the town’s zoning board of appeals.

According to a lawyer representing several of Passaro’s neighbors, “the high-density commercial use is a problem. A marina would increase the number of boats coming and going,  resulting in a substantial increase in noise and congestion, both in a small area of the bay where the docks are located and also throughout the bay. These waters are alreadydensewithboats,dueinparttotheBlueWaterManorrestaurant and  resort, next door to Cool Ledge.”

Interestingly, according to the lawyer, “it  hasbeen reported that the owner of Blue Water Manor may have an option to buy the Cool Ledge  Property, were  it to  befor sale.”

The lawyer stated, “Were  Mr. Passaro  to obtain  ause variance, and were the two propertiestomerge,BasinBaywouldbecomeamajortouristdestinationbetweenLake George Village and the Sagamore resort. That change would destroy the essential character  of Basin Bay as a residentialneighborhood.”

According to Dave Wick, the Lake George Park Commission cannot act upon Passaro’s application for a Class A Marina permit until the Town of Bolton decides if his property is zoned for marina activities.

“Before we can approve an application, we have to make sure it’s compliant with local zoning. If the town says he can’t have a marina there, we can’t issue the permit. That’s a matter of law,” said Wick.

If Passaro has in fact been operating a marina illegally, his case may provide yet another example of conflict resolution: enforcement actions by the Town of Bolton or the Lake George Park Commission.

In Queenbury, objections have been raised to Matt and Rebecca O’Hara’s plans to restore the old Dunhams Bay Marina and base their Freedom Boat Club there.

And in Lake George Village, homeowners have asked the Lake George Park Commission for help in discouraging kayers and paddlers from beaching on their shorefront.

As a matter of policy, the Lake George Park Commission seeks the co-operation of water-based businesses as it works to address over-crowding and conflicts, said Dave Wick.

“We also try to mitigate the impacts of activities in busy areas,” said Wick. “We try to help an applicant achieve his goals and put an operation in place without unduly burdening his neighbors. The Commissioners take that task seriously.”

When weighing applications for permits that could increase congestion in places whose capacity for recreational activities has already been exceeded, the members of the Lake George Park Commission now have the tools to make informed decisions: the 2015 Water-Based Recreation Study.

“When the Commissioners are looking at an application, they can now use the best data we have,” said Wick.  “That’s an instrument they can use when judging how an operation is going to affect the recreational quality of the lake and its users.”

It has been argued that 5 mph zones actually increase the potential for conflicts because boats are forced to congregate in a confined area rather than leaving that area in rapid succession.

Dunham’s Bay appears to be be one such case, if an April meeting of the Lake George Park Comission is any indication.

At that meeting,Carol Collins, the former chairman of The Fund for Lake George and a resident of Assembly Point, commented, “There’s a lot of people who feel that (the Freedom Boat Club’s operation) is going to add a lot more congestion to the Dunham’s Bay area,” despite the fact that fewer privately-owned boats will be berthed at the marina.

And the fact that boats are limited to speeds of 5 mph within the bay offers no relief because that detains boat, said Collins.

In fact, she added, “We’re using the five mile an hour zone to displace the problem, transferring it to another part of the lake.”

Collins said that as boats leave the bay, they accelerate quickly,  generating wakes that pound Assembly Point, eroding the shoreline.

Moreover, she said, the area beyond the no-wake zone suffers from crowding, but because it is more expansive than the bay itself, it hasn’t been designated as one of the lake’s eight congested areas.

“And we will have a much bigger problem with an expanded Boat Club operation,” said Collins.

With the addition of twenty club boats to the bay, Carol Collins’ husband John Collins said, “you’re taking out seasonally-berthed boats that were used, on average, two and a half times a week and bringing in 20 boats that will be used one and a half times a day. When you look just at the numbers, you’re increasing both traffic.”

John Collins continued, “You might say, ‘it’s a big lake, it’s 32 miles long, it can handle the additional boats.’ But if we take that attitude every time a proposal is made, the impact will build.”

Lake George Park Commission staff  calculated the increase in boat traffic in Dunhams Bay from Freedom Boat Club’s 20 boats   to be 3% on weekends,  7% on weekdays.

While the Commissioners voted unanimously to approve the O’Haras’ application, they did limit them to twelve club boats, rather than the 20 originally requested, at least for  the time being.

“A 7% increase in Dunham’s Bay and its outlet could be viewed as a heavy impact. But even if it were, it’s nothing like Huddle Bay, where you have 75 rental boats coming and going. Any additional business there would not be considered by the Commissioners to be a safe operation,” said Wick.

Still, he said, the Commission’s decision to limit the Freedom Boat Club’s permit to twelve boats “was a reasonable compromise.”

Kitty Rooney and Kate Breslin, second and third generation owners respectively of  family property near the mouth of English Brook, came before the Commission in April to request help in keeping kayakers and paddlers from trespassing upon their beach and lawns.

“On an average weekday, 10 to 15  boats, kayaks and  paddle boards drop anchor or float in the shallow waters one hundred feet from our shore, in direct violation of Park Commission regulations that water craft stay at least 200 feet from shore,” said Kitty Rooney.

Rooney said the Park Commission itself identifies the delta that has formed at the outlet of English Brook as a suitable destination for non-motorized watercraft.

Kate Breslin said the boaters not only moor too close to shore, “they come ashore with their dogs and use our property as their bathroom.”

Breslin said her family has called the resorts that rent kayaks and paddleboards to ask that they educate their guests about Lake George Park regulations and to remind them that unless marked otherwise, property is private and should be respected.

“That sounds like a practical solution and the best solution: educating the public,” said Dave Wick.

Sending the marine patrol,  installing “No Trespassing” buoys  (which require a permit from DEC) or drafting new regulations distinguishing “recreating” from “navigating” would not be the best use of resources, said Wick.

“Even if we thought current regulations were inadequate, revising them is a difficult and time-consuming process,” said Wick. “After developing something here, we’d have to send it to state authorities in Albany who would require a regulatory impact statement and demand to know the  science behind it.”

For Lake George Park Commissioner Jim Kneeshaw, recreational conflicts are not confined to the teeming bays where boaters drop anchor and socialize.

He said those conflicts are reflections of a broader trend within the Adirondacks as a whole: overcrowding as a result of the region’s popularity.

“You can’t focus on one operation and say it’s the cause of congestion. We’ve promoted tourism, and it works. We’re reaping a bit of a whirlwind.  Like much of the Adirondacks, especially in the High Peaks,  we’re now having trouble  finding space for everyone. We all contribute to this,” said Kneeshaw.

The solution, he indicated, was to adapt, to change one’s habits to suit the new normal.

“If you’re a skiier, you don’t go to Gore on the weekend,” he said.

modify their behavior if they don’t like crowds and avoid the lake on busy afternoons.

The Lake George Association and other organizations have a role to play in educating the public about conditions on the lake and how their behavior can ease or exacerbate tensions, said Walt Lender, the organization’s executive director.

“The best way to manage conflicts in the future is to make certain that Commissioners and Town Boards have information is current. We have to be conscious of the way both traffic is changing on the lake, the way the use of the lake is changing. You can’t make the decisions without the data,” said Lender.