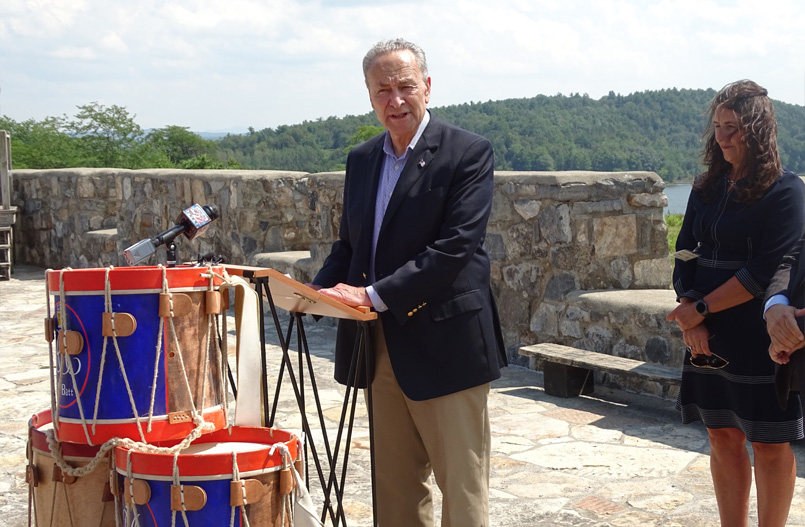 The Land and Water Conservation Fund will receive permanent support, US Senator Chuck Schumer has announced. He’s shown here at Fort Ticonderoga with CEO Beth Hill in 2018.
By Anthony Hall

The US Land and Water Conservation Fund supports more than national parks and wildlife refuges.

Since it was established more than 50 years ago, the fund has also delivered $1 million to New York State to help protect historic battlefields, many of them in the Lake George region.

Earlier this year, the National Park Service announced that Fort Ticonderoga would receive a $69,876 planning grant for its Carillon Battlefield and that a Revolutionary War group was awarded $49,473 to acquire lands associated with the Battle of Fort Anne.

These funds will continue to flow unabated to the Lake George region.

On June 17, the US Senate voted to provide permanent, mandatory funding for the LWCF, ensuring continued support for the National Park Service’s American Battlefield Protection Program.

According to Rep. Elise Stefanik, the House is expected to also pass the legislation, known as the Great American Outdoors Act.

In all likelihood, she said, it will be signed into law by the president.

“The American Battlefield Protection Program is an important one,” said Beth Hill, the president and CEO of Fort Ticonderoga. “We are pleased to see that the program has continued funding, and we look forward to an on-going partnership with the National Parks Service.”

Dan Barusch, Lake George’s Director of Planning, noted, “I was glad to hear that the American Battlefield Protection Program will continue to fund grants. After completing our report, using the $50,000 in funds awarded to us, we had hoped to apply for another grant to implements its recommendation. That is something we may do next year.”

According to US Senators Chuck Schumer and Kirsten Gillibrand, 70% of those funds will be appropriated for deferred maintenance at National Parks. Among those is the Saratoga National Historical Park, where the 1777 Battles of Saratoga were fought. It will receive $146,000 in grants.

Over the course of past several years, according to Senator Schumer, $7.5 has been directed to the Adirondack Park and North Country regions.

Ticonderoga was among the beneficiaries, winning $170,000 to improve local sports and playing fields and 52 acres of conservation lands.

Although the goals of the LWCF include protecting wilderness areas and purchasing land for conservation, the Adirondack Forest Preserve has benefitted little from the fund, largely because it has been supported, historically, by New York State, said Peter Bauer, the executive director of Protect the Adirondacks.

But, he added, if appropriations for the state’s Environmental Protection Fund are reduced or eliminated, the federal government may become a new source of revenues to acquire or protect ecologically sensitive lands.

Moreover, said Bauer, the Land and Water Conservation Fund can also be used for projects to mitigate climate change or to rebuild infrastructure to withstand the extreme weather associated with climate change.

According to Senators Schumer and Gillibrand, the LWCF does not rely upon tax payer dollars to support its programs. Rather, it relies upon revenues collected from offshore oil and gas development.