The Making of “Summer Rush” 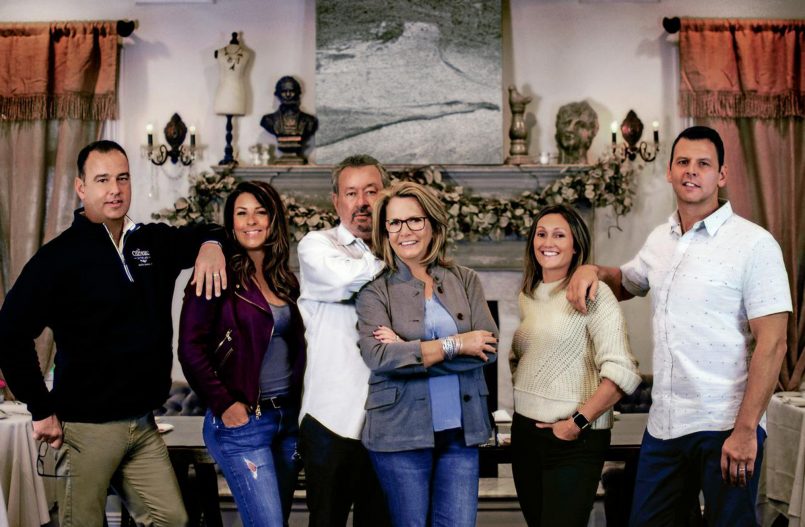 Ed and Jen Foy, Buddy and Cate Foy, Jessica and Jesse Foy, whose restaurants and relationships are featured in a Food Network series premiering June 4.
By Anthony Hall

Three restaurants. Three alpha males. One small town. And one family, a father and two sons, wives beside them, struggling to make the most of a short summer season, sometimes at the expense of one another.

That’s the premise behind “Summer Rush,” the Food Network’s new reality show that follows the Foys, the Bolton Landing family that owns three distinctly different restaurants, through one busy summer season. The four-part series premieres on June 4 at 10 pm.

“Our cameras were there to capture all the real and raw moments as the Foys strive for success, from the conflicts to the victories,” the Food Network’s president, Courtney White, stated in a press release. “The series showcases the unvarnished reality of the summer season as well as the incredible bond one family can maintain even while competing against each other.”

How Real are Reality Shows?

The Food Network describes “Summer Rush” as a “docu-soap series.”

“We are all concerned about how we will be portrayed,” said Buddy Foy Sr., who owns Cate’s Italian Garden with his wife Cate.  “We don’t want to be seen as people hitting one another over the head.”

Cate added, “We may not be the Brady Bunch, but we’re not that sort of people.”

According to Cate Foy, her eldest son Ed, also known as Buddy Jr., co-owner of the Chateau on the Lake with his wife Jennifer, acted as the family’s intermediary with the producers and the Food Network.

He navigated back channels to make certain the family was neither exploited nor cast in a negative light, she said.

Ed Foy was the show’s creators’ initial point of contact.

“Jen and I were approached by a producer and we began brainstorming. At one point, that producer said, ‘we’re pitching network executives tomorrow. Do you have any other ideas?’ And that’s when I suggested my family’s three restaurants and our relationships as the subject for a show. I hadn’t told my father or my brother anything about the conversation. I was nervous. What if it made everyone look bad?” he said.

For the Foys, it was important that the family not be diminished in the eyes of 60 million viewers, nor, of even greater importance, in the eyes of their town.

Cate’s has been a Bolton Landing institution for 25 years. Ed is a graduate of Bolton Central School, as is Jesse, who owns the Diamond Point Grille with his wife Jessica. Jesse serves on the school board.  Buddy has coached Little League and his grandchildren now attend Bolton Central.

“When the producers wanted to emphasize the competition or the drama that would appeal to a national audience, I would interrupt and say, “I go to Stewart’s every morning, I have to go to the Post Office. I care about my community.  If we’re not portrayed authentically, it will embarrass us and embarrass Bolton,” said Ed Foy.

That was as good an introduction to the business of running a restaurant in a resort town as anyone – producers included – could wish for.

“Memorial Day weekend is the hardest weekend of the year,” said Ed Foy. “You go from standing still to running a thousand miles per hour.”

Throughout the summer, the families had to balance the demands of their restaurants with those of the television series.

“We did what the directors told us to do, from the time we got up in the morning until we went to bed at night,” said Buddy Sr. “That being said, we had to maintain the same schedule that we’ve followed for the last 25 years.  So we were so busy doing our thing that we would forget the cameras were there.”

“At the beginning, I wondered how we would pull this off, running a business while mic’d and being interrupted for interviews. But once we were used to it, we enjoyed it,” said Jesse Foy.

There will be Drama

The Foys believe the series will shed a positive light – and, they hope, a welcome one – on Bolton Landing.

“We thought it would be a good thing for the community,” said Buddy Sr. “We hope the show will be viewed as a good experience by the entire town, and that every restaurant, resort and shop will benefit from that experience.”

No one, not even the Foys, have seen all four episodes, but some details are emerging.

For instance, Cate and Buddy are shot catering a Fourth of July party on a private  island, where many of the guests  will be familiar faces to local residents.

The Food Network’s press release offers these teasers: “Buddy Foy Jr. and Jen Foy, cannot seem to agree on the best way to drive more customers and profits.  From taking a risk on a new pastry chef, to serving dinner without power after a large storm, to a big crash in the wine cellar destroying rare, expensive bottles of wine, and to last minute restorations before a big event, they must tackle it all together because one bad season could finish them for good. To get customers in the door, Jesse Foy offers new menu items and tests a new takeout service, possibly biting off more than he can chew. Plus, the pressure is on for Buddy Foy Sr. and Cate Foy as they await a local restaurant review from the Mayor.”

The last item is a reference to Lake George Village Mayor Bob Blais who, as many readers know, reviews restaurants for the Lake George Mirror under the name “Blaze Marshall.”

The producers saw a framed copy of a review of Cate’s he had written twenty years ago, and invited him to return to compare and contrast the restaurant as it is today with the one he visited in 2000.

And in one episode, Buddy Sr. questions Jesse about his decision to serve pizza at Diamond Point Grille – a Cate’s specialty.

“There will be drama, for sure,” acknowledged Jesse, the Foys’ youngest son. “I think it will show how hard we work and how we sometimes work against each other. But at the end of the day, we always come together as a family.”

“When It was all over, we all hugged and said, that was hard, but what a blast. It was therapeutic,” said Ed Foy.

Waiting for the Premiere

Each of the three restaurants is busy building an infrastructure that will enable them to continue serving their regular customers while, at the same time, accommodating those who might wish to visit all three after having seen the series.  A website is being developed to sell collateral items created by Albany Embroidery.

Asked who was going to emerge as the star of the series, Jesse said, “All of us, including the town.”

“We’re sitting on pines and needles, waiting for June 4 to see the show. Like everybody else in town,” said Cate Foy.