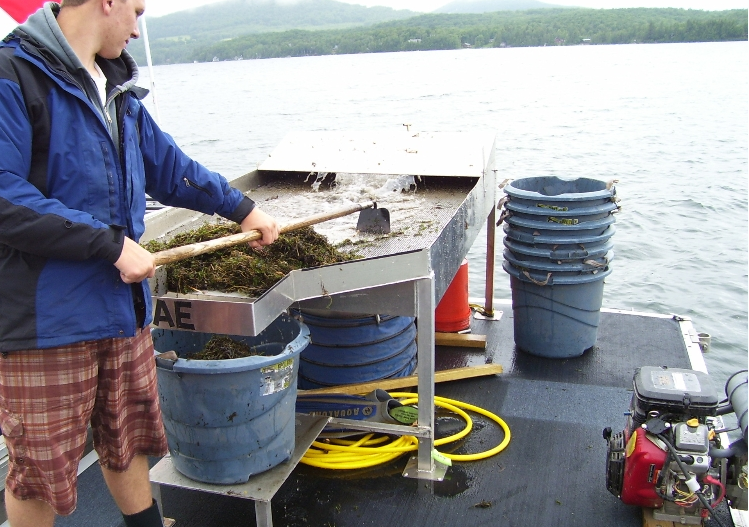 With more money, more hands and more time, more Milfoil will be harvested from Lake George this summer than in either of the two previous years.

“It will be big, big effort this summer,” said Pat Dowd, the communications director of the Lake George Association.

The LGA will contribute $100,000 toward this year’s harvest, which will also benefit from $280,000 in state funds awarded to Lake George through a three year grant to Warren County.

“The goal is to eliminate all but one dense milfoil bed within three years,” said Dave Wick, the excutive director of the Lake George Park Commission, which has conducted a milfoil management program on Lake George since 1988. “New York State was sold on that ambition. It didn’t want to fund twenty years of maintenance.”

Wick has repeatedly stated, “With an  annual operating budget of less than $400,000, we’re essentially mowing lawns – the milfoil rebounds. But with a half million or more,  we can eliminate these beds,” said Wick.

“It costs a lot, but what are the alternatives?’’ he asks.

This year’s budget of $540,000 “enables us to hire three full time crews from the first week in June through late September,” said Wick.

For the second consecutive year, the Lake George Park Commission has contracted with Vermont-based AE Commercial Diving to conduct the aquatic weed-pulling program.

The firm uses a diver-assisted suction harvesting system to convey the pulled plants to the surface, a system that has been used in other, smaller lakes, said Pat Dowd.

“The barge pushes its way through these dense beds, one after the other, ” said Dowd. “It’s very methodical, but it’s slow. The crew and equipment are mobilized to clear one bay, and when that job is completed, everything is packed up and everyone moves to the next bay.”

“This crew will have more flexibility and be transported around the lake more quickly,” said Dowd.

According to Dave Wick, sites to be treated this year include Warner Bay, Echo Bay, Northwest Bay and Glenburnie.

“Because sites such as Dunhams Bay and Harris Bay have been substantially cleared, we now have time to attack  tricky sites such as Glenburnie,” said Wick.

“Our previous contractors spent a lot of time there but, for whatever reason – the fragmentation of the plant, probably – it’s back,” said Wick.

Wick said a site such as Sunset Bay in Huletts Landing, which was last treated two years ago,  will be revisited.

That treatment demonstrated conclusively that dense beds can become things of the past, said Wick.

The Lake George Park Commission devoted three summers and roughly $75,000 to clearing the site that Wick once characterized as “wall to wall milfoil.”

“We wanted to create a model of milfoil management on Lake George,  one that would show that it’s feasible to reduce a site to a level where milfoil has been all but eliminated and reduced to a level where routine maintenance alone is necessary,” said Wick.

He added, “We needed to prove to that we have a strategy that works.”

“We needed a success story,” he continued.

According to Wick, Sunset Bay is that success story, proof that, “if we have the resources, we can achieve our goals.”

“If we can at eliminate all the dense beds in Lake George – with the possible exception of one in Lake George Village, which for a variety of reasons is intractable – then I think we will be doing pretty well,” he added.

According to Walt Lender, the LGA’s executive director, his organization wholeheartedly supports the Lake George Park Commission’s goal of eliminating dense beds and reducing its milfoil management program to one of maintenance.

“In the last few years,  we have come together in an effort to rid the lake of this invasive species by investing hundreds of thousands of dollars, which translates to thousands of hours of manual labor.”

In addition to the grant from New York State to Warren County, funding for the 2019 milfoil management program comes from the state’s Environmental Protection Fund, the Lake George Association and The Fund for Lake George.