John Van Alstine: Portrait of the Artist at his Peak

“Transformations,” on view at The Hyde through September 18, exhibits the full range of the sculptor’s powers. 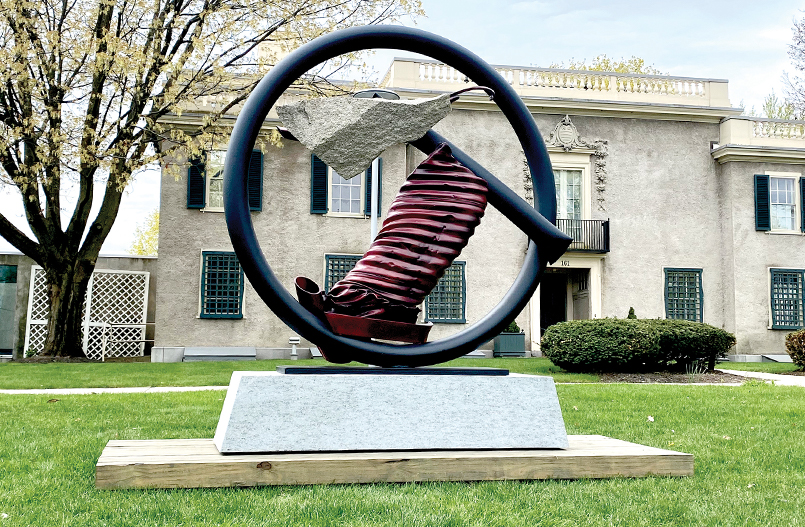 Rock, bronze, steel, the detritus of industrialization, colors from nature and from art’s historical palette – these are the elements that, once, assembled, become a sculpture by John Van Alstine.

Or, rather, once transformed.

“Transformations,” appropriately enough, is the title of the comprehensive exhibition of Van Alstine’s scuplture, drawings and photographs on view at The Hyde Collection in Glens Falls through September 18.

“Ara,” the Latin word for alter, pyre or sanctuary, appears frequently in Van Alstine’s titles, with good reason. The word’s transcendental penumbra is not something he takes lightly. In every piece (or at least in every piece he judges to be complete or successful), what Van Alstine calls “the art spirit” is at work, choreographing the disparate elements, forging a kind of magic, casting a never-to-be-broken spell.

How else could those heavy objects appear to be floating in air?

“I love seeing the sculpture outdoors because it relates to the outdoors,” said Van Alstine. “But in the white cube of a gallery, where nature has been brought indoors, you’re in an environment where the sculpture is fully visible. It pops. Now you’re seeing it in a different context, within a frame, a frame not unlike the frame around a drawing, painting or photograph that signals, ‘this is art.’”

“Transformations” has a narrative, one that corresponds, at least roughly, to the course of Van Alstine’s fifty-year career.

That career began serendipitously enough at St. Lawrence University, where his undeclared major was skiing.

Serendipity also played a role in steering Van Alstine away from carving abstract shapes from marble blocks “like everyone else in art school,” he says.

“At Cornell, a piece that I had just finished was set up on the carving table and as I stepped back to look at it, the piece fell to the floor and broke. I took two of the pieces, put them together, placing them in tension with one another. That was the hinge moment,” said Van Alstine.

He continues, “I began using stone in a way different from other sculptors: as found objects, to be assembled within a new context. I never went back to carving.”

Return to the Adirondacks

Van Alstine grew up in the foothills of the Adirondacks, and a career that included stints teaching out west and life in urban areas, chosen for their proximity to galleries, patrons and curators, ultimately brought him back to the Adirondacks.

(Van Alstine’s career is documented in “John Van Alstine: Sculpture 1971-2018,” published in 2019. The opening of “Transformations” was scheduled to coincide with the release of the book. Because of COVID-19, the exhibition was postponed until 2022. The book, however, “still goes with the exhibition,” says Van Alstine, and is available for purchase at The Hyde.)

A 1985 fellowship at Yaddo, the arts colony in Saratoga Springs, opened him to the gravitational pull that the Adirondacks still exercised upon his spirit, and he and his wife, the sculptor Caroline Ramersdorfer, found just the right place in the Hamilton County town of Wells.

There, they purchased and renovated an old lumber yard, turning its nine acres into a compound of living and work spaces.

The Sculptor as Sisyphus

Four of the 63 pieces in “Transformations” refer to the myth of Sisyphus, the King of Corinth who, for various misdeeds, was condemned in Hades to roll to the top of the hill a large stone, which, when it reached the summit, rolled down again, so that his punishment was eternal.

“I’ve made more than a hundred “Sisyphus” sculptures; the series is a self-portrait,” said Van Alstine. “Like Sisyphus pushing the stone to the top of the mountain, I’m literally moving stone. Metaphorically, I’m pushing my art to a creative peak. But once a sculpture is finished and I come back down, I start over. I never stop. But Albert Camus wrote, you should imagine Sisyphus as happy. It’s not punishment. It’s just the creative process.”