Celebrating the Lake George Club’s Past to Protect its Future 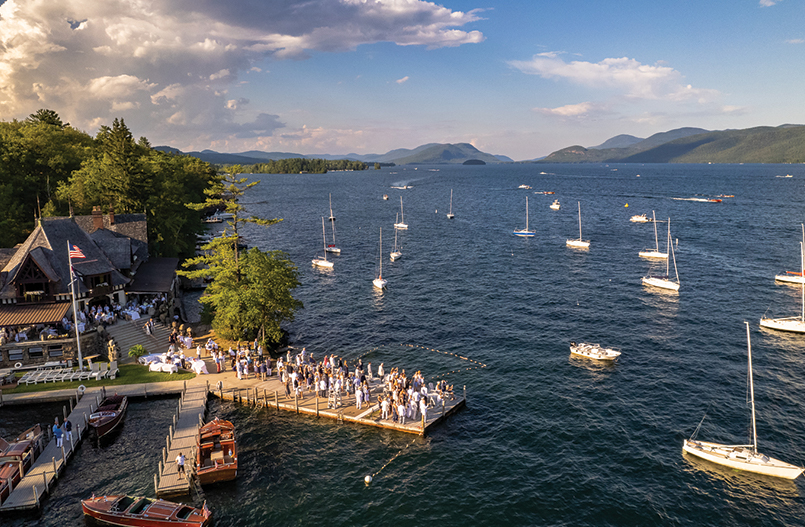 The Lake George Club opened its doors to its members for the first time on August 14, 1909. Once commissioning ceremonies came to a close, the club’s first official powerboat races were held.

They would be the first of many and lay the foundations for the Lake George Club’s role in promoting racing on Lake George.

In 1914, for instance, the club commissioned its own Gold Cup race entry: Hawk Eye.

“Boat racing was the beating heart of the Lake George Club in its early years,” said longtime member Jason Ward. “Boats were designed for speed as well as pleasure. The owners were inventors, designers, engineers. A car manufacturer had his company build boat engines for his use on Lake George. Others figured out how to drop airplane engines into wood hulls.”

“Our goal was to bring the past of the Lake George Club to life, and to truly embrace our history,” said Jennifer Handler, the chair of the club’s entertainment committee, who began organizing the event last autumn.

The focus of the event was a reprise of the wood boat races once held by or near the Lake George Club,

“I’m fascinated by the history of Lake George, and when the Lake George Gold Cup Festival was held in Bolton Landing in 2015, I thought that the Lake George Club should commemorate its role in speed boat racing with a similar event,” said Jennifer Handler. “Not only were many of the boat owners and racers in the first half of the 20th century club members, so are many owners of today’s boats: Chris Freihofer, Bob Bailey, Joe Russell, George Badcock, Teri Hoffman and John Chimento among them.”

Handler also found inspiration for “The Gold Cup!” event in a photograph from the Lake George Club’s archives, an aerial view in which “every member and guest who was there on the day the photograph was taken was out on the dock.”

To recreate that photograph, members and guests were encouraged to adopt a particular style and palette of dress, one that would create the impression of a group of people coming together for a specific purpose, at a specific moment in time.

In addition to roughly 300 people wearing period dress of the 1930s, a display of wood boats equal to any presented at an antique boat show, “The Gold Cup!” event featured music from the Swing era by “Vince Giordano’s Nighthawks.”

“These swing bands are a dying breed,” said Handler. “We were surprised the band was available because it was just coming off a Martin Scorsese film.”

“It’s wonderful that we have members who still own these original and historic boats,” said Ward, the race organizer and Master of Ceremonies.

“The Thatchers: Photographing Lake George 1880-1950” the exhibition at the Bolton Historical Museum, features early Lake George Club powerboats, as well as the Gold Cup races of the 1930s.

There is, for instance, a photograph of the Lake George Club’s Hawk Eye.

That year, a boat owner from the south threatened to build a boat fast enough to defeat Count Mankowski’s Ankle Deep in the 1914 races.

In response, Judson organized a syndicate that included Lake George Club members H.B. Moore of Heart Bay and W.K. Bixby of Bolton Landing to build a raceboat that would keep the Gold Cup on Lake George in the event that Ankle Deep failed to win the race.

At the last moment, Wood realized that he had a long-standing, prior commitment that prevented him from traveling to Lake George, boat in tow: he had promised to visit his mother.

With three thousand people on shore and on the lake waiting to see a speed boat race, Judson had to offer up something.

Whip-po-Will Jr., a 28-ft. single step hydroplane built by the Beebe brothers, once partners of Chris Smith, raced in the 1918 Gold Cup races, held that year in Detroit. Her pilot was another member of the Lake George Club: George Reis.

The Gold Cup races on Lake George in the mid- 1930s are best known through the stylish – one might even say stylized – photos of Morris Rosenfeld and his son Stanley.

Thatcher’s views are in many ways more intimate, and personal than Rosenfelds,’ perhaps because he was the local photographer and knew George Reis and everyone associated with El Lagarto.

By 1933, El Lagarto was known as “the leaping Lizard of Lake George.”

That year, El Lagarto won the Gold Cup races on the Detroit River, enabling Reis to bring the event to Lake George in 1934, the first time Gold Cup races were run here since 1914. They returned in 1935 and 1936.

On an autumn day in 1935, Reis took El Lagarto to Northwest Bay, where it was clocked at a top speed of 72.727 mph, breaking existing speed records.

El Lagarto was retired from competition in 1937. But she remained Reis’ favorite pleasure boat and was his preferred mode of transport between his home in Bolton Landing and the Lake George Club.

Bringing the Lake George Club’s Past to Life,

Jennifer Handler believes “The Gold Cup!” will become an annual, or at least biennial, event.

“It’s important for the members, especially new members, to appreciate the history of Lake George and the Lake George Club; otherwise, they might not be as interested as they could be in maintaining its traditions and preserving its history,” said Jennifer Handler.

“There are many books and many newspaper and magazine articles one can read, but an event like “The Gold Cup” paints an indelible picture and reminds everyone, “this is a club with history.”