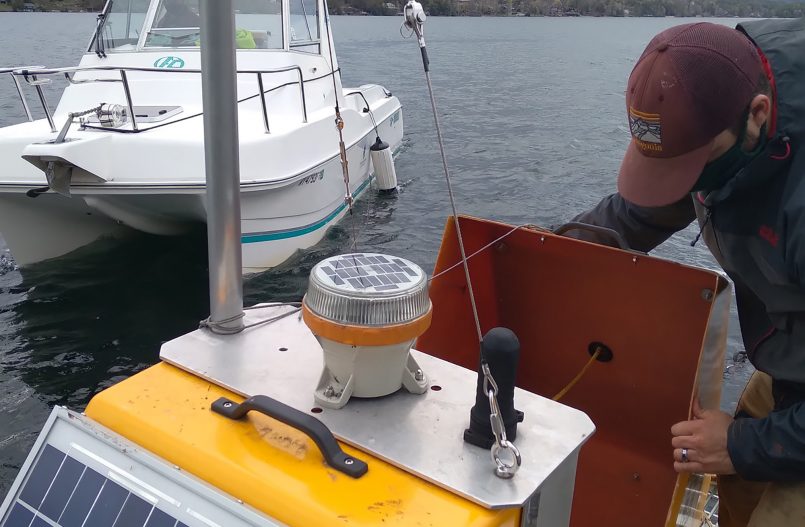 What causes Harmful Algal Blooms, why they occur with increasing frequency and why some produce toxins and others don’t: these are the questions driving the Jefferson Project’s research this year, according to Rick Relyea, Jefferson Project director and a professor of biological sciences at Rensselaer Polytechnic Institute.

“Harmful Algal Blooms have become one of the most significant global water issues confronting us,” said Relyea. “It’s a human health issue. It’s an economic issue. It’s a social issue. It affects jobs. It affects property values. It affects tourism and the quality of our drinking water. It costs the US billions of dollars a year in damages.”

The problem of Harmful Algal Blooms is only growing worse, said Relyea.

“It’s intensifying at a rate faster than most environmental problems. The number of lakes in New York State with Harmful Algal Blooms has jumped in just the last ten years. There’s something going on that we need to figure out,” said Relyea.

And as we learned last fall, Lake George is not immune to the problem.

On November 7, the first reported sighting of Harmful Algal Blooms on Lake George in decades and the first confirmed outbreak occurred in Harris Bay.

Additional blooms were spotted on Monday, Nov. 9 in Harris Bay, Sandy Bay, Warner Bay and in the near-shore waters of Lake George Village, all of which dissipated within 24 hours.

The Jefferson Project’s tests revealed the HAB was Dolichospermum fuscum — a cyanobacteria commonly found in North American lakes, Lake George included. However, the HAB contained no detectable levels of toxins, scientists from the Jefferson Project and the state’s Environmental Conservation department reported at the time.

“Cyanobacteria sometimes produce toxins, sometimes not,” said Relyea.  “But even if no toxins are detected, it doesn’t mean none are present. It could mean that in the samples we tested, concentrations were not sufficiently high to be detected.”

But, he added, “it could also mean the algae never made any toxins. Scientists around the world want to understand why some algal blooms are toxic and others aren’t. What triggers these cyanobacteria to produce these suites of toxins, some of which irritate the skin or even harm the liver and nervous system? If we knew the answers to these questions, we’d be far ahead.”

Understanding the Origins of the November Outbreak

On Nov. 10, the Jefferson Project deployed vertical profilers to collect dynamic, highly refined data at various depths throughout the water column at Harris Bay and the three other sites where blooms were observed.

“We also collected water samples from roughly 30 sites around the lake’s south basin,” said Relyea. “We not only went to those locations where the presence of a Harmful Algal Bloom was confirmed or suspected, we went to places where none were present. We had to ask ourselves, ‘Why did the blooms show up under these conditions? What are the differences in the conditions between the various sites? Would those differences help us understand why a HAB happened here and not there?’ We had people collecting data and others looking at the computer-generated models.”

Water samples were subjected to rigorous chemical, biological and computer modeling analyses. Roughly 75 samples of different types of algae were also sent to laboratories for analysis. Researchers analyzed data related to the air, water, winds and temperatures when the blooms occurred, among other things.

According to Relyea, Dolichospermum fuscum is known to have little pouches, called air vacuoles, which make it possible for them to float in the deep waters of the open lake.

“We know this species can only come to the surface as a film of cyanobacteria when the water is extremely calm, which it was,” said Relyea.

One hypothesis is that the lake’s currents brought the blooms from the open waters to the bays and shore areas where they were first observed, he said.

“People reported seeing Dolichospermum fuscum coming to the surface at multiple locations around the lake. That fact might contain hints or clues as to what was happening. We’ll know more when all the data has been analyzed,” said Relyea.

Relyea said he’s aware people are anxious to know why Lake George experienced Harmful Algal Blooms at that particular time and in those locations.

“These things take time to assess,” he said. “We had hoped to have results earlier, but they’re coming in now. We should be in a position to offer our best and most considered interpretation of the sources of the outbreak soon.”

Nutrients Alone Do Not Explain HABs

The Jefferson Project will redeploy vertical profilers to Harris Bay this spring.

“If a HAB ever pops up again in that location, we will be in a position to observe how water is circulating from the top to the bottom of the column, howthe cyanobacteria is migrating through the water column and changing over time. We will have very good data,” said Relyea.

Relyea said the Jefferson Project’s goal is to learn why Harmful Algal Blooms develop, not only on Lake George, but across a wide range of water bodies, from a clear, low- nutrient lake such as Lake George to fertile, opaque lakes like Chautauqua.

“We know that nutrients are a necessary but not sufficient condition for the production of Harmful Algal Blooms. Nutrients alone cannot enable us to explain why they happen, where they happen, when they happen. And until you understand HABs, you can’t effectively mitigate their effects. You can treat the symptoms, but not the causes,” he said.

Relyea said the scientists and engineers at Rensselaer and IBM are likely to be the first to unlock the mysteries of Harmful Algal Blooms.

“If the origins of Harmful Algal Blooms were an easy or straight forward problem, it would have been solved long time ago,” said Relyea. “But we think we have the right people, the right equipment and the right modeling capabilities to tackle this problem in ways that no one has before.”

COVID-19 forced the Jefferson Project to curtail its research on Lake George in 2020, said Relyea.

“We had to close down all of our onsite research activities for several months,” he said.

Nevertheless, he added, “Throughout the pandemic, we maintained the weather stations, the tributary stations and the profilers measuring lake currents, though often remotely.”

This spring however, those instruments will be supplemented by the return of the Jefferson Project’s five vertical profilers.

“Everyone will see them, and they will give us back our eyes on the water and on water quality. So the entire sensor network is now operational. And the team is excited to be back on Lake George,” said Relyea.