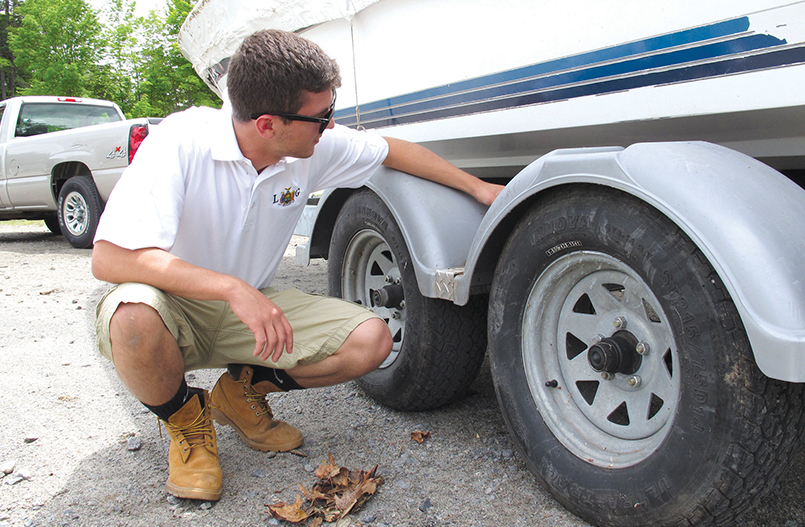 A Lake George Park Commission inspector examines a boat trailer for signs that it may be carrying aquatic invasive species to Lake George.
By Anthony F. Hall

Bolton Landing and the state-owned camping islands in the Narrows are having a busier summer than usual if the number of boats inspected for aquatic invasive species at Norowal Marina is any indication.

According to the Park Commission’s Justin Luyk, Norowal has inspected 550 more boats this year for invasive species than it had by late July last summer.

Luyk told the Commissioners at their July 26 meeting that 20% of that increase could be attributed to the fact that inspection stations opened two weeks earlier this season than in years past. Between April 15 and May 1, 112 boats passed through the marina.

“Still, Norowal was busier this year than last, and a lot of those boats are coming from out of town. More vacationers may be coming to Bolton Landing this summer,” Luyk said.

Trailered motorboats are the primary vectors for the spread of aquatic invasive species and nearly 500,000 of them are registered in New York State alone.

Many of those trailered to Lake George and the Adirondacks carry as many as 200 invasive species, including hydrilla and quagga mussels.

This summer, inspectors at Norowal discovered Quagga mussels on one boat, Luyk told the Commissioners.

Had technicians failed to inspect and decontaminate the boat, another ecosystem-altering invasive species might have established itself in Lake George.

The lake’s mandatory boat inspection, which was launched in 2014, saw a 12% increase in the number of boats inspected for invasive aquatic species over last year, Luyk said in his midsummer report to the Park Commission.

Luyk cited a number of notable data points in his report.

The inspection station at Dunham’s Bay is open weekends only this year, but inspectors processed almost as many boats this year as it did by this time in 2021.

Thus far, nearly 1500 boats have been inspected at the station this summer.

As of June 18, fifty of those boats were decontaminated – 12.1% of all boats decontaminated this year. Of those fifty boats, 31 of them were departing Lake Champlain.

“That’s 31 boats that would have carried invasive species to some other water body, so this inspection station not only helps protect Lake George from invasive species, but lakes throughout the region,” said Luyk.

Staffing costs are down from last year, but that’s not necessarily a good thing.

“We’re a bit short-staffed at Norowal this year,” said Luyk. “We’re not paying as many people as we’d like to be doing at that site.”

Boats carrying Waterchestnut and Eurasian watermilfoil, which was discovered in Lake George in 1985, have also been decontaminated.

Dave Wick, the Lake George Park Commission’s executive director, said earlier this year that the $50,000 increase for this year’s program reflects the costs of starting inspections earlier and ending them later, a change in regulations adopted in 2021. This year, inspection stations will close later in the season than in years past, on December 15.

New York State shares the costs of the inspection program with the Warren County Board of Supervisors, the Village of Lake George, the Towns of Bolton, Queensbury and Lake George and the Lake George Association.

The Lake George Park Commission began requiring boats to be clean, drained and dry before launching in Lake George in 2014.

Since then, no new invasive species have established themselves in Lake George, thanks largely to the Commission’s mandatory inspection program.

“This is perhaps the most profound statement that can be made regarding this landmark program,” Dave Wick stated in the “Final Report of the 2021 Lake George Aquatic Invasive Species Prevention Program,” released in January, 2022.