The Garden Club of Lake George Celebrates its Centenary 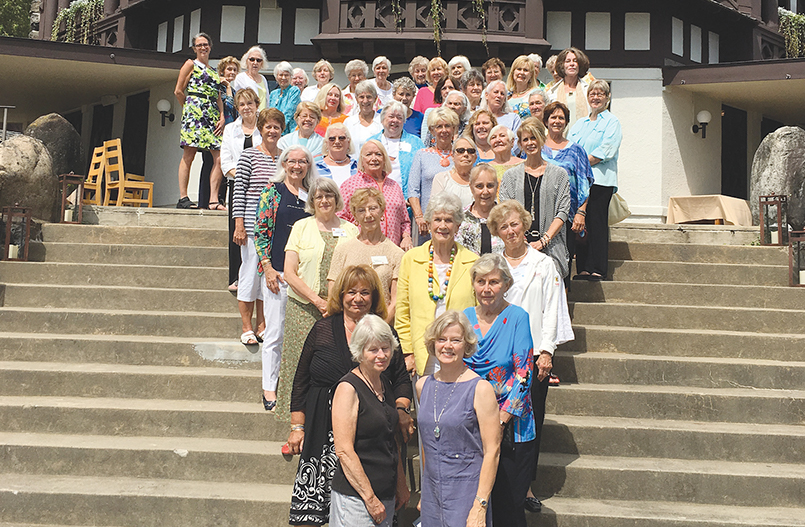 Members of the Garden Club of Lake George and their guests gathered for a group portrait at the Lake George Club in 2016. A centenary photo will be taken later this summer.
By Anthony F. Hall

These were no ordinary women.

“They were strong women with a vision,” Charlanne McDonough said at a July 22 meeting, held in Bolton Landing to commemorate the club’s centenary.

“At a meeting of the Bolton Improvement Association in the summer of 1922, Mrs. Percival Knauth suggested that it would be expedient to form a Garden Club,” a 1972 Anniversary Year Book printed by Adirondack Resorts Press (publisher of the Lake George Mirror) states.

At some point in its history, the Bolton Improvement Association merged with the Lake George Association.

The fact that the Garden Club was founded under the auspices of that organization attests to its members’ interest in conservation.

As the 1972 Year Book states, “The Club interested itself in roadside improvements (and) the elimination of billboards (and) in the preservation of the cleanness and beauty of the lake.”

Much of the Garden Club’s archives were lost in a 1928 fire that destroyed a building donated to the club by Elizabeth Brereton.

But with the aid of surviving documents, newspaper clippings, census reports and even Ancestry.com, the Garden Club’s current members have been able to collect much of the information still available about the founders and their immediate successors.

Marianne Schurz, for instance, at whose home the club’s first formal meeting was held, was the daughter of Carl Schurz, Abraham Lincoln’s minister to Spain, a U.S. Senator and Rutherford Hayes’ Secretary of the Interior.

According to Charlanne McDonough, Marianne Schurz’s mother, Margarathe, founded the first kindergarten in America, an educational idea imported from her native Germany.

Carl Schurz and his daughter were members of a summer community of German-Americans and their families that included the founders of the experimental Alma Farm, physicians Abraham and Mary Putnam Jacobi, the anthropologist Franz Boas and his daughter, pioneering choreographer Franziska, and the brothers Knauth, partners in an international investment banking firm founded by their father in Leipzig in the 1850s.

Antonio Knauth built an Alpine-style house called Felseck in Bolton Landing in 1898, two years after his brother Percival built Waldeck near the outlet of Finkle, or Artists, Brook.

The women of the Knauth families had an unusual hobby: woodworking. A studio was built for them and each had her own sets of tools. Among their products – owned today by private collectors – was a bookshelf with ornately carved decorations made for Carl Schurz on his 70th birthday.

Garden Club co-founder Mary Whitman Knauth was perhaps the most accomplished woodworker of all. Born in Cambridge, Massachusetts, a member of the Platts of Plattsburgh family, her woodworking tools are now in the collections of Adirondack Experience in Blue Mountain Lake.

Mary Whitman Knauth and Charlotte Pruyn Hyde were the only married ladies among the Garden Club’s founders.

Among the achievements of the members of the Garden Club of Lake George: Mary Hayden was an early member of Wiawaka’s Board of Governors; Elizabeth Brereton was the first single woman to be admitted to the Lake George Club; the museum founded by Charlotte Hyde, The Hyde Collection, will celebrate its 60th anniversary next year. Mrs. Harold M. Bixby was president in 1942. Four years earlier, she evacuated her family from China, steps ahead of the invading Japanese. Hilda Loines, the club’s president in 1944, was a renowned horticulturist and chairwoman of the Brooklyn Botanical Garden. In 1964, she and her two sisters donated roughly thirty acres near the mouth of Northwest Bay Brook to the Eastern New York Nature Conservancy “to perpetuate the wild beauty of this area and maintain the natural forest and marsh conditions….  And to establish a sanctuary for all forms of native plant, animal and bird life.” Up Yonda Farm, the Environmental Education center in Bolton Landing, was donated to Warren County by Club member Alice Scott 25 years ago this summer.  A current member, Judith Killeen, co-founded The Friends of Up Yonda Farm in 2018 to support the center. The Garden Club of Lake George’s members still tend the gardens Alice Scott established there. The grandchildren of Mrs. Ralph Bixby open her gardens to the Lake George Land Conservancy, perpetuating the members’ interest in conservation.

Membership in the Garden Club of Lake George is limited by its by-laws to sixty women. Anyone interested in applying for membership may contact a current member.