In Search of Sembrich 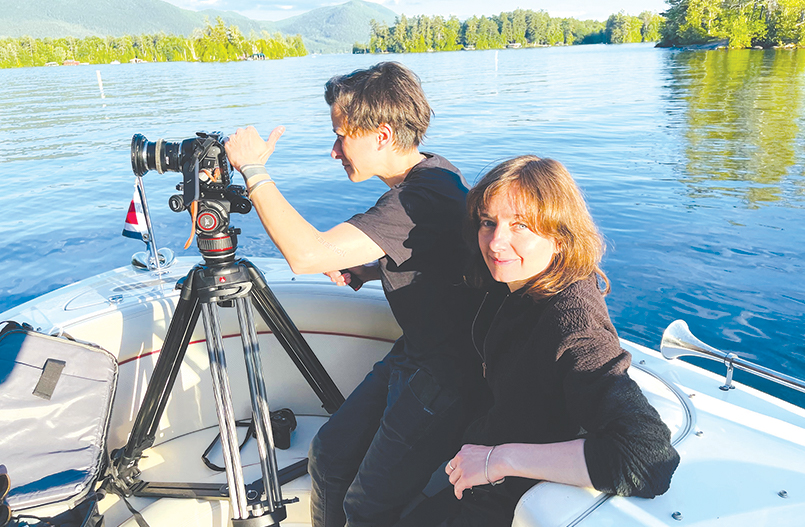 “The film asks a question: why has she been forgotten?” said Radka Franczak, a Berlin-based filmmaker and writer who traveled to Bolton Landing earlier this summer to resume work on a film about Marcella Sembrich.

If Sembrich’s memory persists anywhere, it is, of course, in Bolton Landing, where the opera star built a teaching studio in 1924 and whose legacy is perpetuated through The Sembrich museum and annual summer concert series.

But in Sembrich’s native Poland, and in Franczak’s own Polish family, the singer has receded into the shadows.

“In my family, Enrico Caruso has a mythological status, but Sembrich, who was his co-star, is a non-entity,” said Franczak.

That Franczak’s family is all but ignorant of Sembrich is especially curious because the singer is, in fact, a relative – the filmmaker’s great-great-aunt.

Initially, Franczak did not even know the aunt’s name, let alone that she was once a famous opera singer; she knew only that there was once “a rich relative from New York.”

Once she learned that relative’s name, she typed it into a search engine and discovered, to her amazement, that she was not only one of the greatest singers who ever lived, but that the archives of the Performing Arts library at Lincoln Center hold her papers and that a museum in upstate New York is devoted is to her memory.

“I was shocked,” said Francazak. “So, in 2014, I decided I would visit Bolton Landing and learn more about Sembrich. I then decided to make a film about her, my family and how we lost sight of her.”

As the project evolved, it became a quest to understand not only why Sembrich’s voice has been lost, but why those of other women have as well.

“By bringing Marcella’s story back, I can inspire and give courage to myself and to other women to use our voices. To believe in, develop and follow our talent and vision,” Franczak states.

She began to consider the ways in which women are silenced, their voices muted.

That inquiry led her to the musician, poet and memoirist

“All the time, Patti Smith says, ‘use your voice. You all have voices. Speak up.’”

As it happens, Patti Smith is an opera fan, and she was more than happy to be interviewed for the film.

“Just as Sembrich projected herself across a sea she had never seen, she would soon project a voice no one knew she had, the voice that was always within her, even when she herself didn’t know it was there,” Smith says in the film.

(Referring to the Franczak family’s silence about Sembrich, Smith says, “if my mother had told me I had an ancestor who had opened the Metropolitan Opera House and sang all over the world, I would’ve been thrilled.”)

“This question of why Sembrich was forgotten is a many-layered one; there is no one single answer,” said Franczak.

Sembrich herself contributed to her own erasure from history, Franczak learned.

“Letters were burned. People’s images were cut from photographs. She wanted control,” said Franczak. “In her will, she stated that there was to be no biography. She wanted to be forgotten.”

Throughout her life, Sembrich’s image was a carefully crafted one, said Franczak.

“She was a pioneer in the control of publicity,” said Franczak. “She hired a writer to fabricate stories about her childhood. She allowed herself to be photographed from one side only, her good side. Her bad side had a lazy eye.”

Grzybowska, a prominent photojournalist as well as a visual artist, said when we met her in Bolton Landing, “the themes of the film about Sembrich repeat themselves throughout history…. to obtain the impression of recurring motifs, the material I shoot must blend in, almost imperceptibly, with archival materials.”

Before returning to Berlin, Franczak and Grzybowska drove to North Carolina to interview descendants of Sembrich’s daughter-in-law.

They will continue to raise funds to complete the film, whose working title is “Use Your Voice.”