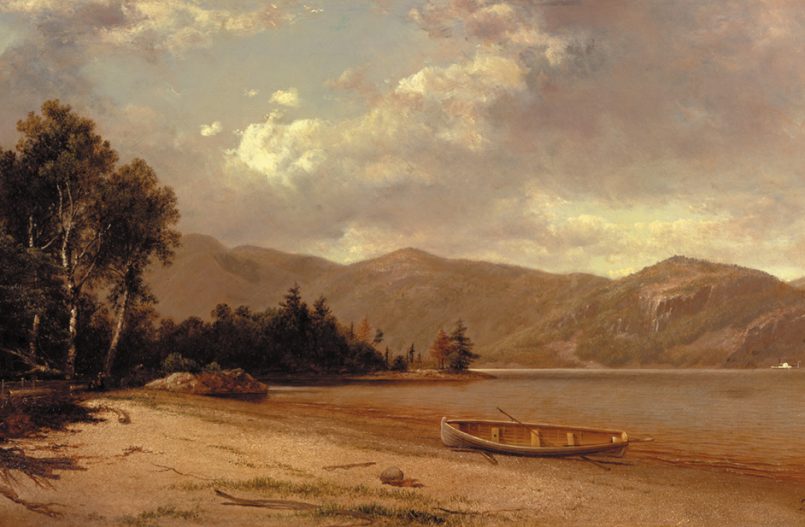 David Johnson’s 1874 “View of Dresden, Lake George,” portrays a bay that until recently was filled with milfoil. It is now close to its original condition.
By Anthony F. Hall

According to Dave Wick, the Lake George Park Commission’s executive director, that level of spending will continue in 2020 and beyond.

“With our current levels of funding, we are looking forward to some extremely productive years,” said Wick.

Summarizing the results of the Park Commission’s 2019 milfoil management program at its November 26 meeting, Wick said that nearly 83,000 pounds of milfoil were harvested from the lake this past summer.

The firm employs a system that has been used in other, smaller lakes, said Pat Dowd of the Lake George Association, which contributes $100,000 per year to the management program.

“The company uses what is, in essence, a big pontoon boat which receives the milfoil from a suction tube which is fed by a diver in the water, hand harvesting the milfoil,” Dave Wick explained.

The pontoon boat, or barge, pushes through one dense bed after another, methodically but slowly.

Once a site has been cleared, the team moves to the next site.

“We’re seeing significant progress,” said Wick. “This past year, we were lucky enough to hit 17 sites.”

Among the 17 sites treated by the contractors this past summer was Sunset Bay, near Huletts Landing.

Wick said this bay (the subject of a famous 19th century Hudson River School painting by David Johnson) “was once a wall-to-wall field of milfoil.”

But after four years of intensive harvesting at a cost of roughly $25,000 a year by AE Commercial Diving and its predecessor, “Sunset Bay does not look like that anymore,” said Wick.

The size of the bed has been reduced by 95%, said Wick.

“Keeping the bay cleared of milfoil will be an ongoing effort. But we think its days of dense beds are behind us,” he added.

For Wick, Sunset Bay is important both for itself and for what it represents. It exemplifies the dangers that Eurasian milfoil poses to Lake George’s recreational and ecological value while, at the same time, showcasing the strengths of the Lake George Park Commission’s milfoil management program –  when, that is, it is adequately funded.

“Eurasian milfoil is a wickedly fast-growing plant that can entirely overtake a lake, preventing swimming or fishing,” said Wick.  “Some areas of Lake George have reached that stage.”

At Sunset Bay, “we wanted to show what we’re able to do,” said Wick.

Speaking of Sunset Bay in the past, Wick has said, “We needed to prove to the Lake George Park Commissioners and to the public that we have a strategy that works.”

“We wanted to create a model of milfoil management on Lake George, one that would show that it’s feasible to reduce a site to a level where milfoil has been all but eliminated and reduced to a level where routine maintenance alone is necessary,” he continued.

The treatment of Sunset Bay has demonstrated conclusively that dense beds can become things of the past, said Wick.

It is a success story, proof that, “if we have the resources, we can achieve our goals.”

“If we can at eliminate all the dense beds in Lake George – with the possible exception of one in Lake George Village, which for a variety of reasons is intractable – then I think we will be doing pretty well,” Wick added.

Rogers Rock Among Sites to be Cleared in 2020

Since Eurasian milfoil was discovered in Lake George in 1985, $6 million has been sent to eradicate or contain the spread of the invasive aquatic plant.

“When I became the Lake George Park Commission’s executive director in 2012, our budget for milfoil management was roughly $100,000 per year. That did not enable us to manage every site on Lake George, and milfoil spread. We just didn’t have the resources to contain it,” said Wick.

Recognizing that milfoil is a problem will not go away on its own, “The Fund for Lake George and the Lake George Association stepped up their efforts and began to make substantial financial contributions. That has helped turn the tide,” said Wick.

“It costs a lot, but what are the alternatives?’ asked Wick.

With an annual operating budget of less than $400,000, “we’re essentially mowing lawns – the milfoil rebounds. But with a half million or more, we can eliminate these beds,” said Wick.

“Our goal is to shrink every dense bed by about 90% and revisit them every two or three years,” he said.

Since 2012, the number of dense beds has dropped from 20 to 30 to approximately seven, said Wick.

Once dense beds are eliminated, milfoil throughout Lake George can be managed for roughly $200,000 a year, said Wick.

“We cleared Arcady Bay three years ago, but the milfoil has rebounded. Rogers Rock was well-managed in the past, but it is starting to see new growth. We have to stay on top of these sites,” said Wick.

If Lake George’s milfoil problem remains insuperable, even after dedicating $500,000 every year for at least another few years to its management, an herbicide may be the best alternative to suction or hand-harvesting, said Wick.

The Lake George Park Commission submitted applications to the Adirondack Park Agency to conduct a pilot project with the herbicide SONAR in four bays during the summer of 2002, but the agency rejected them on the grounds that rare aquatic plants would be harmed.

Since then, the science has improved, said Wick.

“There’s a wonder drug by the name of Procellacor which has a kill rate of 99%; for a fraction of our current costs, we could knock back milfoil. The surviving 1% could be hand-harvested easily,” said Wick.

The Adirondack Park Agency might be more open to the use of the chemical Procellacor in Lake George than it was to SONAR, said Wick.