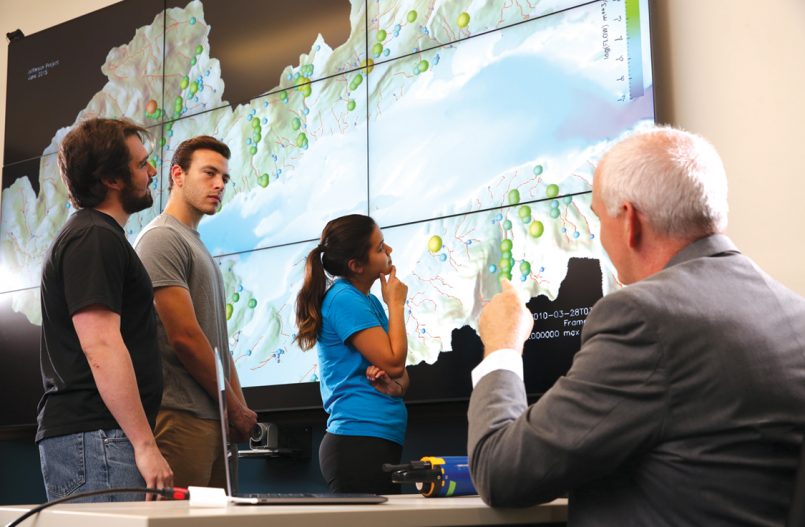 Here on Lake George, the engineers, scientists and advocates whose organizations comprise the Jefferson Project –IBM Research, Rensselaer Polytechnic Institute and The Fund for Lake George – are reviewing this year’s accomplishments and planning next year’s programs.

“Our world-leading environmental data-gathering and analytics have made Lake George ‘the Smartest Lake in the World’ and are now providing unprecedented science- based insights into how best to protect the lake from water quality threats,” write Dr. Harry Kolar, Prof. Rick Relyea and Eric Siy, of IBM, RPI and The Fund, respectively, in the partnership’s annual report for 2019, available at jeffersonproject.rpi.edu.

The Lake George Mirror interviewed Kolar, Relyea and Siy separately, hoping to acquire if not a comprehensive understanding than at least an aerial view of the Jefferson Project’s status at the end of its fifth year and the start of its sixth.

A 2019 milestone that all three consider significant is the dedication of a fully assembled, fully operational network of 500 smart sensors deployed throughout the lake and its various tributaries.

“Our initial expectations have been exceeded by far,” said IBM’s Harry Kolar, one of the Jefferson Project’s co-directors.

In addition to chemical and biological fluctuations, the sensors mounted on the multi-purpose platforms monitor the weather, the streams that feed the lake and the currents that circulate through the water.

“We’re learning how circulation actually behaves,” said Kolar. “We look at the way the water and particles suspended in the water move, and where nutrients are distributed up and down the water column.”

Sensor platforms are arrayed strategically throughout the watershed.

“We now have good spatial coverage of the lake,” continued Kolar.  “We also have excellent temporal coverage, by which I mean the frequency with which we’re sampling the various indicators of water quality. We’re collecting extremely rich data on a continuous, minute-by-minute basis from the platforms and it’s here – in the data –where the Jefferson Project begins,” said Kolar

According to Prof. Rick Relyea, a director of the Jefferson Project and the executive director of the Darrin Fresh Water Institute, the sensor network was completed this past spring.

“We’re learning that the deep water in the main lake is fairly resilient. Whatever pollutants there may be, they undergo dilution. The closer the water is to human activities, namely, the shallow waters near shore, the more likely you are to find abundant algae or invasive species. Without compromising our capacity to study the deep water, we have pivoted to the shallows and streams,” said Relyea.

According to Eric Siy, an even more important milestone is what the completed senor network makes possible: “the integration of these vast quantities of data into a comprehensive view of the lake, from physics to fish, for the first time in the history of any fresh water body.”

The Lake is the Lab

This past year, Relyea and his researchers from RPI conducted a variety of experiments that promise to yield additional insights into the lake’s water quality.

For instance, they built an in-lake mesocosm, a large floating laboratory that enables scientists to study a slice of an ecosystem.

Relyea and his team were curious about the effects of road salt on life in the lake and in the possible sources of Harmful Algal Blooms.

For the past several years, RPI’s scientists have conducted similar experiments in 900 mesocosms at the Rensselaer Aquatic Laboratory, where conditions in lakes, ponds and wetlands were simulated.

On Lake George, however, the experiments were replicated in 20 plastic sacks, about nine feet deep and four feet in diameter, each holding approximately 2500 gallons of the lake’s own water.

“First, we asked what effects increased levels of road salt would have on water quality; we successfully executed those experiments, though we are still analyzing the results.

Another experiment, conducted with Waterkeeper Chris Navitsky, assessed shoreline algae with the assistance of  homeowners who agreed to suspend algae-collecting tiles from their docks.

Its early, tentative results, which many have found surprising, suggest that nearby septic systems or wastewater treatment plants may not be the only sources of algae. From somewhere in the lake, an unusually large amount of dead organic matter may very well be carried by the lake’s currents into some bays, where it decomposes and releases nutrients.

According to Relyea, the Jefferson Project’s circulation models, constructed from sensor-relayed data showing how water is moving through the lake, can help confirm that hypothesis.

“The algal title survey, the sensor network and the computer modeling can all be integrated to exhibit something that is not only interesting to us, but important to homeowners, who have seen their shorelines fouled by algae,” said Relyea.

“If sensors see something happening somewhere in the lake, with the winds, for instance, other sensors will respond. That interplay is very important if we are to know with accuracy what is going on,” says Harry Kolar.

Powered by ever-more sensor data, the growing narrative and predictive power of its computer models is among the advances made by the Jefferson Project this past year.

“We’re using data from the sensor network when we’re running the models.  Our weather data feeds the runoff and circulation models. If the weather data tells us to anticipate a big storm, we know the flow rates on a particular stream will increase, to cite but one example,” said Kolar.

But sensor data is not the only source of the computer models’ power, said Rick Relyea.

“Our scientific experiments also inform the modeling,” said Relyea. “The experiments allow us to visit the future and see what would happen if we increase nutrients by a factor of five or even ten.”

Lake George Past and Future

A “scenario engine,” a modelling program created by IBM engineers and mathematicians, will, in fact, enable policy makers to look decades into the future and predict the consequences of loading the lake with more nutrients or pollutants.

It, too, is fed by data from the sensors, RPI’s scientific research and more than thirty-five years of water quality data collected by the Darrin Fresh Water Institute.

“From a policy perspective, the value of being able to forecast changes is that it allows us to take action to ensure the lake’s protection,” said Eric Siy, The Fund’s executive director.

“We can model short term forecasts. But what happens if you want to look decades or a century out? An analyst can input the water quality parameters and the model can be run forward. You can then see what might result from replacing septic systems over a period of time. But to do that is very complicated if the projections are to be correct. So we’re taking our time with this. It will be a focus for 2020,” said Harry Kolar.

Lake George and the Climate Crisis

Using a hundred or more indicators of water quality, the Jefferson Project’s Scenario Engine will be able to model what might happen to the lake in the coming years and in the coming decades, given various assumptions about human behavior on and around the lake.

But how to model for the impacts of human activities across the globe on climate?

“We can run the models decades out, looking at stressors from local sources. On top of that, we can overlay a climate model,” said Harry Kolar.

Rick Relyea said his researchers are already studying changes in biology, temperature and other possible indicators of climate change.

“We’re able to warm the water in mesocosms by a few degrees and study effects on different species,” he said.

But, he added, “it’s not easy to predict how climate change will affect the lake’s chemistry, physics and the hundreds of species living in the lake.”

To mention only the most obvious: the abbreviated freezes on the region’s lakes, where ice forms later than it once did and departs the lakes sooner than it did in years past.

“If the lake ceases to freeze over, if we have a longer growing season, everything from warmer temperatures to the lake’s exposure to more sunlight will have the potential to create cascading effects,” said Relyea. “I say potential effects, because we don’t yet have a handle on how all this  will play out on the various species distributed throughout the food web.”

The effects of road salt, nutrients and invasive species on water quality are only aggravated by climate change, says Eric Siy.

“Whether it’s salt, nutrients or invasives, rising water temperature will be a big issue,” said Siy.

While the Jefferson Project’s powers to slow climate change are limited, it can help make Lake George more “naturally resilient” in the face of a climate crisis, said Siy.

“What we can do is act preemptively to reduce pressure on the lake:  reducing nutrients, ensuring that we get no new invasives, reducing road salt.  What we do now will head off what’s coming down the road, in part as a result of climate change,” said Siy.

According to Eric Siy, the year 2020 is one in which “we will be using all the intelligence that’s made Lake George the world’s smartest lake the best protected lake in the world.”

“Of course, in many respects, we’re already there,” Siy continued. “But the Jefferson Project helps us to better understand what more needs to be done. It opens up new realms of possibilities for lake protection.”

Strides are coming, especially in the field of Harmful Algal Blooms.

“What are the elements of the perfect storm that allows for a Harmful Algal Bloom? We have the wherewithal to answer that question and avert its worst consequences. We’re learning what we need to do to give this lake a fighting chance of survival. Science is showing us the way,” said Siy.