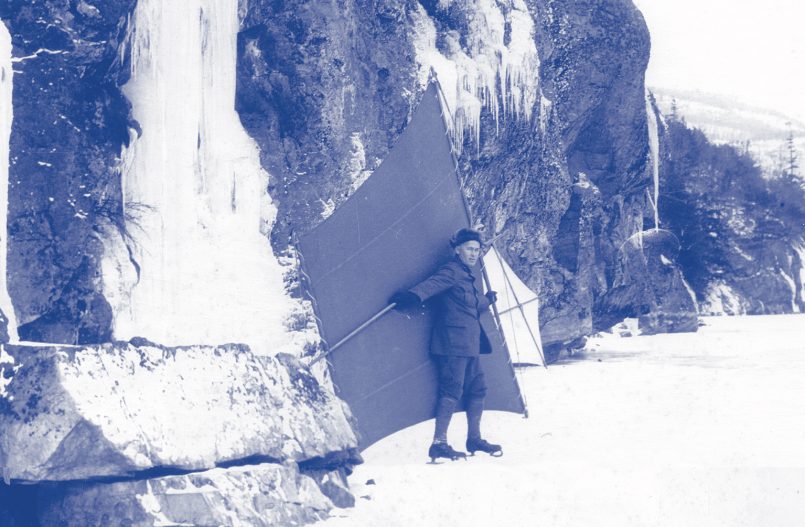 A lot has changed in Sweet Briar Bay since 1936,

the first year Dr. Doug Langdon looked out upon the lake from the property he now owns.

Horace Barber’s Boat Livery is gone, and so is the Algonquin Hotel above the road.

The hotel’s lakefront has been replaced by the Algonquin restaurant and Chic’s Marina, and the level of boat traffic in the bay probably could not have been imagined in 1936.

But Langdon can still see Marcella Sembrich’s studio, and thanks in part to his family’s old friend and neighbor, John Apperson, Black Mountain, Shelving Rock, Sleeping Beauty, Buck and Pilot Knob mountains are part of the Adirondack Forest Preserve and will remain undisturbed.

Also visible is Dome Island, which Apperson managed, with the help of many others, to preserve in a wild state into perpetuity.

That, of course, suits Dr. Langdon, a life-long conservationist, perfectly.

Now Langdon has made his own contribution to the preservation of Lake George’s heritage; in this case, a memoir about the General Electric scientists who created “a preservationist community” in Bolton Landing in the first decades of the 20th century.

Among the members of this “Preservationist Community” were Langdon’s own parents and Dr. Katherine Blodgett, a family friend whose property he now owns.

Blodgett – or Aunt Katie, as Langdon called her – was the first woman ever to receive a PhD from Cambridge University in physics and the first woman with a PhD to work at the General Electric Research Laboratory.

GE hired Blodgett to be Dr. Irving Langmuir’s research assistant in 1918, after she completed a Masters degree at the University of Chicago.

Returning to Langmuir’s lab after receiving her doctorate from Cambridge, Blodgett worked with Langmuir on the use of tungsten for lamp filaments.

According to an issue of a GE in-house magazine published in 1978, Blodgett’s other accomplishments included the invention of low-reflection “invisible” glass, used today for camera lenses. She also worked on airplane wing de-icing and creating effective smokescreens to camouflage ships in war time.

Blodgett bought her Lake George property from a larger parcel bordering Apperson’s, which had been acquired by friends and colleagues from GE.

“They were a select group, chosen via invitation only, likely hand-picked by Dr. Langmuir and/or John Apperson,” writes Langdon. “They were highly educated and intellectually well-endowed, scientists or engineers; had advanced degrees including one PhD, two Masters degrees–science was the group’s forte.”

Among Blodgett and others, the group included Edith Clark, an expert in the field of long-line electrical-transmission.

Most of the camps in the community were built by Will Hill, the grandfather of Bolton resident Lee Haines and a caretaker for Apperson.

According to Langdon, Hill had mastered the craft of building with vertical logs, mainly of American chestnut, which had been all but wiped out on Lake George by the late 1920s,

Langdon’s memoir affirms the many connections between General Electric and Lake George – the strongest link being John Apperson, a GE engineer.

Apperson’s first property on Lake George was on the east shore of Tongue Mountain, which he acquired in 1918.

That was a base camp for many of the activities for which Apperson became known – rip rapping, removing squatters’ cabins from Forest Preserve lands, monitoring lake levels.

But for the intervention of Irving Langmuir, some of those activities would have cost Apperson his job at GE.

In 1925, Langmuir bought a parcel in Huddle Bay, adjacent to the buildings and grounds of the old Lake View House hotel, which Apperson and a few colleagues from GE – including Eleanor Roosevelt’s brother Hall – had purchased not long before.

According to Langdon, that arrangement failed to last largely because of Apperson’s insistence that everyone who came to the lake should come to work – not socialize.

By the early 1930s, when he won the Nobel Prize for his work in surface chemistry, Langmuir had moved his base of operations to Crown Island.

There, he spent his summers conducting experiments, including one with home-made floats that led to the identification of what are known today as Langmuir Circulations. His cloud seeding experiments created at least two thunderstorms over Lake George.

The founders of The Fund for Lake George, which merged with the Lake George Association in 2021, were General Electric scientists and executives.

In 2013, that organization joined IBM and RPI to create the Jefferson Project and make Lake George “the smartest lake in the world.”

Mike Kelly, a senior research engineer on the Jefferson Project, says the spirit of Irving Langmuir hovers over it.

“One evening in late December, moving a sensor into the lake, shivers went down my spine as I looked back at Crown Island. I thought, everything we’re doing is new and exciting, but we’re following in Langmuir’s footsteps,” said Kelly. “He’s a continual source of inspiration.”

Mike Kelly’s brother Dr. John E. Kelly III, one of the founders of the Jefferson Project, is credited with much of IBM’s advanced computing technology.

Their father, John E. Kelly, was – yes, you guessed correctly -a GE scientist working in the research lab.

Doug Langdon will sign copies of his book on August 4 at 4 pm at the Bolton Historical Museum.