Home Share Tweet
Next Story An Unseen Side of The Hyde: The Statuary Groups of John Rogers

Adirondacks Still Out of Reach of Rail Passengers 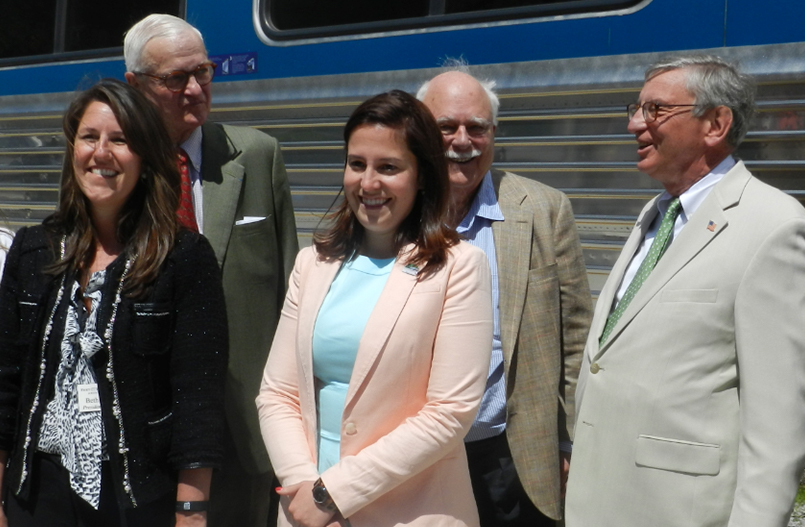 Amtrak also restored service recently to cities between New York and Toronto aboard  the Maple Leaf.

No trains have run along that line since the start of the pandemic, costing the Adirondack region tourism revenues and depriving  residents of of a vital means of transportation, say the region’s representative in Congress,  Sen. Chuck Schumer, Sen. Kirsten Gillibrand and Rep. Elise Stefanik.

“The Adirondack line provides critical service for New York State’s North Country, connecting residents with larger economic centers such as New York’s Capital Region, New York City, and Montreal. Senators Schumer and Gillibrand are concerned that further delays in the resumption of services, such as those due to the requalification of train and engine crews, would hurt the North Country’s economy as the state rebounds from the COVID-19 pandemic,” a press release from the offices of Schumer and Gillibrand stated.

That disparities in service has provoked the two US Senators and Stefanik to call upon Amtrak President and CEO Stephen J. Gardner to restore the Adirondack line to service.

Stefanik said she was told in May that lack of staff prevented the trains from running.

“Now that Amtrak has restored travel for the Maple Leaf train from New York City to Toronto, there should be no reason not to resume service from Albany to Montreal,” said Stefanik.

“Amtrak is a federally chartered corporation created and funded by Congress with the mission to serve the American people in cities, suburbs, and small towns across the country. It is frustrating to see the lack of service to the rural areas of Upstate New York,” Stefanik wrote.

“We are aware of the challenges that Amtrak and public transportation agencies have faced and are continuing to face due to the COVID-19 Pandemic, including low ridership levels and supply chain issues,” Schumer and Gillibrand said in their letter. “As shown through the Infrastructure Investment and Jobs Act, Congress is willing and able to assist in helping public transportation agencies return to normal service, and if possible, expand. However, Amtrak must ensure that the Adirondack and other suspended lines do not face unnecessary delays due to its impact to the region.”

Sandy Morhouse, Chairman of the Board of Trustees of Fort Ticonderoga, said “Fort Ticonderoga  would love to see service restored to Ticonderoga and to the Amtrak station adjacent to the fort’s entrance.”

In 2015, Fort Ticonderoga launched a “Rails to Wheels” partnership with Amtrak to promote travel to the Champlain Valley. Since then, it has expanded its offerings to include boat cruises and an event space at the Pavilion.

“Because of the pandemic, we didn’t have enough time to realize the full potential of rail service to Ticonderoga, but the opportunity to attract more travelers is there and we would welcome the chance to nurture that potential,” said Morhouse.

Amtrak service to Vergennes, across Lake Champlain from Crown Point, is of little benefit to Fort Ticonderoga because of the distance between the two locations, said Morhouse.

According to information provided by the offices of Schumer and Gillibrand, in 2019,  the last full fiscal year before the pandemic impacted the State of New York, Amtrak’s Adirondack line had 117,490 riders, a 5.1 percent increase in ridershipover 2018.

While residents of towns in the Champlain Valley have registered complaints through social media  about the lack of rail service, its absence has had little effect on Lake George’s tourism economy, said Gina Mintzer, president of the Lake George Regional Chamber of Commerce.

“If we’re asked for information about how to reach Lake George by train, we say disembark at Fort Edward and take an Uber to Lake George, but frankly, those calls are few and far between,” said Mintzer.