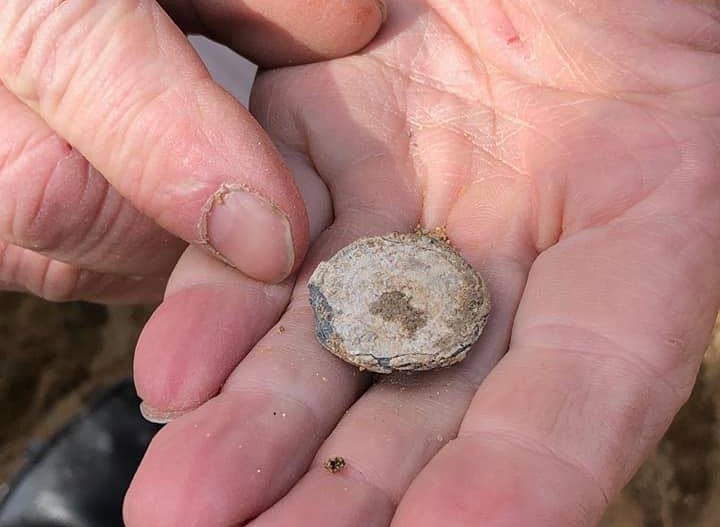 The remains dislodged from an 18th century military cemetery at a Lake George construction site will, in all likelihood, be reinterred on the grounds of Fort George Park, say Village officials.

The Village’s Board of Trustees has adopted a resolution calling upon New York State to permit the remains to be buried at the state-owned park, said Mayor Bob Blais.

Blais said New York State officials support the proposal, although the remains will be in the possession of state archaeologists for at least a year, undergoing examination and analyses.

Mike Borgos, an attorney for Ruben and Dana Ellsworth, who were planning to build townhouses at the site, said, “it’s the community’s decision to make (as to where the remains should lie.) The Ellsworth’s only express wish is that the right thing be done, and the remains be treated respectfully and buried with dignity, as befits anyone, but especially soldiers who died in the service of our country.”

According to Borgos, the construction of the townhouses has been halted and steps have been taken to protect the site from further disturbance.

Before construction ceased and the site was closed to visitors, archaeologists from the New York State Museum, the Department of Environmental Conservation and the Office of Parks, Recreation and Historic Preservation concluded that it held at least 11 graves, containing the partial remains of 13 individuals.

“It’s an important site,” said Dr. David Starbuck, the first archaeologist to be alerted by the Warren County Sheriff’s Office to the presence of human remains at the property.

Starbuck said at least some of the skeletal remains appear to belong to a soldier from the Continental Army’s First Pennsylvania Battalion.

The identification was made with the help of buttons from a uniform in which the dead were buried, said Antonia Giuliana, a spokesperson for the New York State Department of Education.

It would not be surprising to learn that more than one soldier buried at the cemetery was from the First Pennsylvania Battalion, local historians say.

According to Matt Keagle, Fort Ticonderoga’s curator, the presence of the First Pennsylvania Battalion at Fort George, the British-built fort at the head of the lake, is a well-documented fact.

Constructed in the late 1750s to support Britain’s campaigns against the French at Lake Champlain, the fort was captured by the Americans in 1775.

In January, 1776, the battalion was dispatched to Quebec, where it was to join an expedition led by Richard Montgomery and Benedict Arnold to detach Canada from Great Britain.

While at Fort George, a few of the soldiers toured the ruins of Fort William Henry, which once led David Starbuck to suggest that these troops were among the 1755 fort’s first tourists.

They may have been members of two companies that remained behind at Fort George; the largest part of the battalion had departed, transported by bateaux to the foot of the lake.

“Thence they marched across the portage to Fort Ticonderoga (and then) sailed to Crown Point,” according to a history of the battalion published in 1880.

According to Matt Keagle, the troops arrived in Canada in the spring of 1776, months after the Americans had been repulsed at the walls of Quebec City in an assault that left Richard Montgomery dead and Benedict Arnold badly wounded.

Retreating to Fort Ticonderoga, the Pennsylvanians remained there until Burgoyne’s British troops took the fort in October, 1777.

Meanwhile, the largest military hospital in the colonies was being constructed at Fort George, according to Russell Bellico, the author of several books about Lake George during the 18th century.

Bellico has stated that the hospital was established for soldiers with smallpox and other infectious diseases who were garrisoned at Fort Ticonderoga.

Or as Major General Horatio Gates wrote to George Washington in June, 1776 (as recorded in B.F. DeCosta’s 1871 “Notes on the History of Fort George,”) “the Northern Army is infected with pestilence…To put this evil from us, a General Hospital is established at Fort George…where every infected person is immediately sent.”

Indeed, at least 118 men from the Pennsylvania battalion had been admitted to the hospital by July, 1776, according to 18th century archives.

By August of that year, roughly 2,000 patients were being treated at the new hospital, with twenty to thirty dying every day.

The graves discovered in Lake George Village could be among the hundreds created to bury those who died from small pox and other diseases at the hospital, historians say.

According to David Starbuck, small pox would have left no visible marks on skeletal remains, and archeologists examining the remains have not, as yet, found any signs of trauma.

That’s led more than one historian to support the view that the remains are those of soldiers who died at the hospital, rather than in battle.

“If a soldier died in battle, the likelihood is that he would have been buried on site, not in a cemetery in a well-defined grave,” said Hohmann.

According to New York State Department of Education spokeswoman Antonia Giuliana, archaeologists are in the process of analyzing the physical condition, health and diseases of the buried at the time of their death.

Giuliana said a preliminary analysis of the remains has identified seven adults over 20 years of age and six individuals younger than 20. Fragments of at least five other individuals were recovered from soils disturbed during construction.

State archaeologists are also studying the age and origin of the cemetery, said Giuliana.

If, indeed, the military cemetery was created to serve a hospital, it is not clear where that hospital was located, said David Starbuck.

“Some local residents told us there was a small pox hospital near the construction site, but we don’t have an authoritative source for that information,” said Starbuck.

Antonia Giuliana said the analysis of the skeletal remains and research into the origins of the cemetery are “expected to take several months. When that work is completed, the information will be shared with the media and the public.”