Who – and What – Made El Lagarto the Fastest Boat in America? 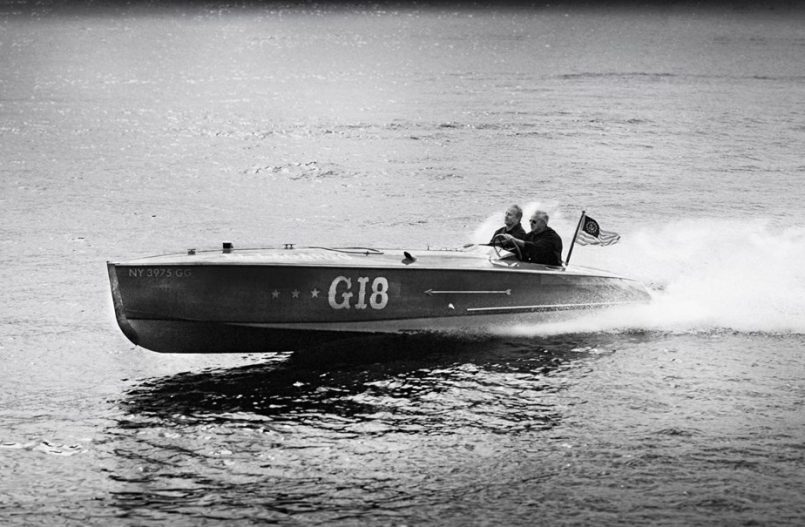 No two men could have been more unlike the other. One fastidious, the other extravagant. One looked like a movie star, the other yearned to be one.

What united them was a shared love of engines and boats and the common desire to be the fastest man on Lake George.

Indeed, they would have been competitors had they not become collaborators, combining their skills and talents to make one boat the most famous in America.

The boat was three-time Gold Cup winner El Lagarto and the collaborators were, of course, George Reis and Anderson Bowers.

Jon Bowers, Anderson Bowers’ grandson, tells the story of their collaboration – and friendship – in a new book, “Legend of Lake George: El Lagarto and the Men who Made her Great.”

“Nobody who has written about El Lagarto has any idea of the actual story, or so I believe. So I decided to find out for myself what was true and what was false,” said Bowers.

In the process of researching the book, said Bowers, “I learned so much about my grandfather that I hadn’t known, as well as much about George Reis, whom I called Uncle George because he was such a huge presence in my life.”

Both Reis and Bowers came from towns near Pittsburgh, Pennsylvania, where Reis’s grandfather amassed a fortune in the steel industry. Bowers began life in more modest circumstances, though his drive would ultimately take him to Cornell, MIT, the US Navy and Wall Street.

According to Jon Bowers, the two met at the Lake George Club in 1913, during one of the many events celebrating Count Casimir Mankowski’s Gold Cup victory on the St. Lawrence River, the victory that would bring the Gold Cup races to Lake George in 1914.

(Reis’ family first came to Lake George in 1901, taking suites at the Sagamore until 1914, when the house that became famous as George Reis’ boathouse was finished. Bowers was introduced to Lake George through a family friend, who was building a children’s camp on Pilot Knob.)

“They started helping each other, working on each other’s boats and engines. George was always impressed with my grandfather’s meticulous attention to detail. George did things differently. He just wanted to get the job done. My grandfather would always say, ‘George, it has to be done correctly.”

The partnership that ultimately brought El Lagarto to international acclaim began in the early 1920s, when both men purchased 26’ Hackers from the owner of Buffalo’s Peerless Marine Motor Company, both named Miss Mary, both registered as G-8.

According to Bowers, this has led to some understandable confusion, since history records that it was a 26-foot Hacker previously entered in Gold Cup races as Miss Mary that became the famous El Lagarto.

One favorite tale, recounted by a young Andy Rooney in an article that appeared in the March, 1949 issue of “Motor Boating” magazine, is true, says Bowers.

A local, Lake George rivalry, rather than an ambition to become the world’s greatest speed boat racer, inspired Reis to acquire his Miss Mary.

Reis told Anderson that he would buy the boat only if he was convinced that it could beat Jonathan Moore’s Jolly Roger. He dispatched Bowers to Buffalo to inspect the boat and, if it met the criterion, purchase it for him.

“Bowers got a bicycle, measured the distance one wheel revolution covered, then, counting the bike’s wheel turns, he rode off a mile… The boat clocked close to fifty miles per hour and Bowers bought it for Reis,” according to Rooney’s article.

That year, the two witnessed the victories of Hotsy Totsy, whose owner, Victor Kleisrath, had added steps to hull.

It is commonly believed that it was these shingles that made El Lagarto America’s fastest speedboat, enabling the boat to leap across the surface, gaining speed by staying above the water, as former Adirondack Museum cboat curator Hallie Bond has noted.

“George was often asked what made El Lagarto such a winning boat,” writes Bowers.

Bowers then proceeds to enumerate the features that contributed to the boat’s superiority, as stated by Reis. The shingles are not among them.

In his conclusion, Bowers lists six individuals, in addition to Reis and Bowers, responsible for El Lagarto’s success.

Omitted from the list: the Gates brothers. Local historian Bill Gates credits his uncle Walter “Smokey” Gates, at least in part, with the redesign and reconstruction of the boat’s bottom.

(For his part, Gates deprecates Anderson Bowers in his book “Lake George Boats and Steamboats,” by describing him as Reis’ “summer friend from Pilot Knob,” invited to “ride along” during Gold Cup races.)

By 1933 (and for whatever reason) El Lagarto was known as “the leaping Lizard of Lake George.”

That year, Reis and Bowers won the Gold Cup races on the Detroit River and brought the event back to Lake George, where the races would be held again in 1935 and 1936.

On an autumn day in 1935, Reis and Bowers took El Lagarto to Northwest Bay, where it was clocked at a top speed of 72.727 mph, breaking existing records.

According to Jon Bowers, Anderson Bowers and George Reis’ son, George Jr, scattered Reis’ ashes from El Lagarto near the spot in Northwest Bay where the speed record had been broken.

According to Bill Gates, his uncle, Bob Gates, was given that solemn duty.

“Bob Gates, who cared for El Lagarto after Walter Gates retired, didn’t have the heart to start El Lagarto after George’s death, so George’s ashes were spread from El Lagarto as it was being towed by El Lacayo (Reis’ Gar Wood),” Gates writes in “Lake George Boats and Steamboats.”

Readers will have to judge for themselves which account is the accurate one.

Bowers’ book can be ordered through the Warren County Historical Society, its publisher. For information, call 518-743-0734, Tuesday or Thursday, from 9 am to 4 pm.