$160,000 planning grant is the first stage in the multi-year process 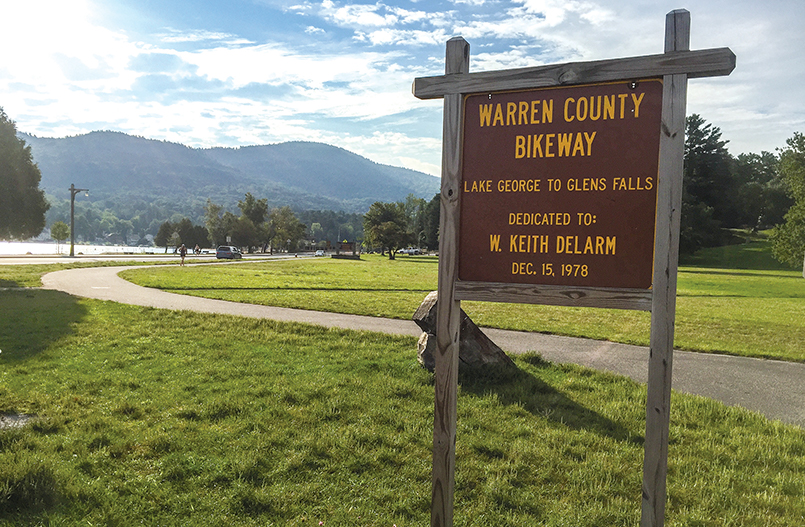 A $160,000 grant from the Northern Border Regional Commission, announced on August 24 by Senators Schumer and Gillibrand and Representative Stefanik, will bring the trail and each terminus – New York City, the Canadian border, Buffalo – that much closer to Lake George.

A 12-mile section of the trail between Fort Edward and Fort Anne is all but accessible from Lake George via the 10-mile Warren County Bikeway and the 9-mile Glens Falls Feeder Canal Towpath, said Ethan Gaddy, the Warren County Planner who developed the grant application.

“We are very close to being connected, but there are gaps between Lake George and the Empire State Trail’s Champlain Valley section,” said Gaddy.

Among those gaps is a poorly marked, unattractive and unsafe road that takes bicyclists past Glens Falls’ wastewater  treatment plant.

“That’s hardly a welcoming gateway to downtown Glens Falls with the world-famous Hyde Collection and access to the Queen of American Lakes,” said Gaddy.

According to Gaddy, the $160,000 grant will fund the first phase of a multi-year, multi-dimensional project that   ultimately will efficiently and safely link Lake George and Glens Falls to the Empire State Trail.

“As of now, we don’t have a long-term management plan for our multi-use trails. This grant positions us to develop one,” said Gaddy.

“It’s a planning grant,” he emphasized.

“The grant will be used to assess deficiencies in the Warren County Bikeway and the Feeder Canal trails,” said Gaddy.

“It will explore a number of concepts, assess the feasibility of specific trail improvements and linkages and estimate their costs.”

The work to be funded by the current grant “will provide Warren County and municipal partners with an actionable plan for making investments in the multi-use trail network,” a press release from Senators Schumer and Gillibrand stated.

The $160,000 grant requires a $40,000 match that will be provided by Warren County and participating municipalities, said Gaddy.

After two Lake George residents were killed and another injured when a speeding motorcyclist lost control of his bike and slammed into a group of pedestrians on the Warren County Bikeway earlier this summer, Warren County initiated a review of current safety measures in place in the Bikeway

The safety of the trails is among the things to be assessed by whichever firm is retained to draft the management or action plan, said Gaddy.

“In comparison to national standards for multi-use trails, there’s a lot of modernization that needs to be done to keep our Bikeway up to basic safety standards,” Gaddy said, noting that portions of the Bikeway where the path intersects or shares roadway need particular attention.

“There’s a lot of different design guidelines that we can use to create safer intersections,” said Gaddy.

Upgrades are important because the multi-purpose path is a significant recreational and workforce asset, said Gaddy. “The Bikeway is a really important part of our community infrastructure,” Gaddy said. “If we are to attract the so-called ‘amenity-migrants,’ those looking for recreation-based communities, if we’re to compete with Saratoga and Burlington, VT, we have to public facilities equal to theirs.”

Others, such as Tracey Clothier, a Lake George resident and planner who specializes in community trails, said access to Lake George from the Empire State Trail will boost visitation.

“Bicyclists using the Empire State Trail are looking for shunpikes and offshoots of the main spine, so better connections will be great for Lake George,” she said. “Lake George is the perfect destination.”

Clothier said the Champlain Valley section of the Empire State Trail is expected to attract 430,000 cyclists and pedestrians a year.

People are also looking for off-highway, safe outings that can be enjoyed by the entire family and the Warren County Bikeway lends itself to that kind of demand, said

“Instead of going to Great Escape, you’re going to come here for the trails,” said Clothier.

“That will be a collaborative effort of our Public Works Department, the municipalities and the tourism and business communities,” said Gaddy. “We will be looking for a coherent, cohesive interpretive system.”