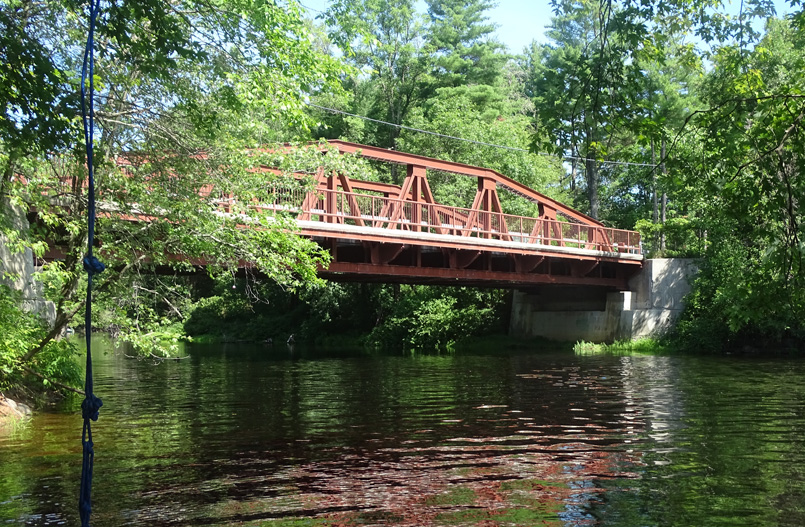 Evidence of Emerald Ash Borer was found at the Warren County Canoe Launch on the Schroon River, near the bridge between Chester and Horicon.
By Anthony Hall

Emerald Ash Borer, a small but destructive Asian beetle that infests and kills native Ash trees, has been found in southeastern Warren County.

The discovery, which was reported by Warren County and New York State Department of Environmental Conservation officials on August 4, is the first indication that this particular invasive species may have established itself within the Adirondack Park.

“Unfortunately, it was not a question of if the Emerald Ash Borer reaches the Adirondacks, but when,” said Dr. Gary Lovett, a forest ecologist at the Cary Institute of Ecosystem Studies in Millbrook, NY.

DEC officials said infected trees were identified by Department of Transportation staff at the Warren County Canoe Launch on the Schroon River, which is located in the town of Chester.

“It’s very sad to hear that the Emerald Ash Borer has reached Warren County,” said Stony Creek Supervisor Frank Thomas, Chairman of the Warren County Board of Supervisors. “The spread of this invasive will be absolutely devastating to our ash trees and substantially degrade our beautiful forests.”

Nevertheless, he said, “it is an iconic tree, and losing the thick stands where they exist would be a blow to the watershed.”

The Conservancy monitors ash stands on its preserves for evidence of EAB, said Brown.

The Keene Valley-based Adirondack Park Invasive Plant Program (APIPP) is currently assisting the DEC in surveying the site to determine how widespread the damage is, said APIPP’s Education and Communications Coordinator Emily-Bell Dinan.

“Very little time elapsed between the detection of the EAB in Warren County to the confirmation of its identity,” said Dinan. “After delimiting or surveying the extent of the infestation, APIPP, DEC and our other partners will determine our next steps.”

Felling Infected Trees and Other Treatments

DEC officials recommend that infected ash trees be felled and the wood be left behind, burned or chipped on site, if the infestation is to be contained, a press release issued by the agency stated.

Early detection decreases the cost of removing and replacing a tree, the DEC stated.

Larvae of the Emerald Ash Borer is a delicacy for some native predators, such as woodpeckers, said Dinan, although North American predators have not stopped the spread of EAB.

According to Dr. Mark Whitmore, a Cornell University entomologist who studies terrestrial invasive species, at least one pesticide has been found to be an effective agent against EAB.

“One treatment of a pesticide whose active ingredient is Emamectin benzoate, injected into the tree, will last three years,” said Whitmore. “It’s best to treat the tree before it shows any symptoms. And it’s often cheaper to treat a tree with a pesticide than it is to have it removed.”

While treating individual trees on private property with pesticides may be effective, treating an entire landscape would be cost prohibitive, if not humanly impossible, said Dinan.

Removing infected trees may be the best way, in the short term, of preventing the further spread of the infestation, said Dinan.

On the one hand, “it buys our region the time needed by researchers to develop biological controls, based on Asian predators of EAB,” she said.

On the other hand, Dinan said, “the felled trees remind people of the necessity of taking responsibility for the spread of the invasive, through fire wood for example.”

As of yet, no biological control agent has been successfully lab-tested, said Lovett, the Cary Institute ecologist.

Fire or camp wood brought to the region from areas outside the Adirondack may have been the source of the infestation, officials speculated.

“EAB hides in firewood and people unknowingly transfer it by transporting firewood,” said Jamie Brown. “The DEC does a good job with education and monitoring, but it is difficult to keep out all non-local firewood.”

Nevertheless, the Warren County infestation could have been caused by a flight of Emerald Ash Borer from nearby counties, said Lovett and Whitmore.

“People move them through firewood, but they also move themselves. In the lab, they have been shown to have the ability to fly twenty miles or more, although they rarely do that,” said Whitmore.

To limit the spread of EAB by human beings, DEC tries to prevent the transportation of firewood beyond a fifty- mile radius.

Even fifty miles may be too great a distance to safely transport camp wood, Dinan said.

“It should probably be a hyperlocal purchase,” she said.

Jamie Brown said the Lake George Land Conservancy is working with AIPIP to make certain that if EAB spreads beyond the initial infestation, it is detected and contained.

Information about how the public can help is available at lglc.org, said Brown.

Brown also said his organization is planning workshops with the Warren County Soil and Water Conservation District to teach members of the public to identify EAB.

According to DEC, the insect is suspected of first entering the U.S. near Detroit, Michigan, in 2002.

It then made its way to 19 states, including New York, where it was found in western counties in 2009. Since then, it has spread to more than fifteen counties.

“We don’t know for certain how EAB got here, but it is generally assumed that it arrived in wooden packing crates or pallets,” said Lovett.

Lovett is among a group of ecologists, entomologists and economists working to limit new introductions of forest pests through federal policies regulating international trade. “We really need the federal government to pay more attention to preventing the importation of these pests,” said Lovett.

Lovett said his group, co-authors of a widely-publicized study, “Nonnative Forest Insects and Pathogens in the United States: Impacts and Policy Options,”supported preventative measures because it is less expensive and less difficult to prevent new introductions of forest pests than it is to treat infected trees or restore damaged forests.

“It’s much easier and makes much more sense to try to prevent these things from getting into the country than it is to try to deal with them once they’re already here,” he said.

Among the measures Lovett and his colleagues favor: requiring substitutes for the wood pallets and shipping crates used in international trade.

The packaging material is now the primary vector for wood-boring pests, said Lovett.

“Twenty-five million containers are brought to this country every year. Thirteen million of those containers have wooden packing material. So the potential for new introductions should not be minimized,” said Lovett.

Other recommendations include: restricting the importation of live plants by horticulturalists or for landscaping; ; increasing surveillance at ports; enforcing existing regulations; improving procedures in foreign countries to ensure that shipments are pest-free before they leave, and increasing penalties on shipping companies that don’t comply with regulations.

“These are common sense measures we can take to address the problem,” said Lovett.

Without such measures, Lovett warned, the consequences of allowing invasive terrestrial species to spread are grave.

“Invasive pests represent the most severe and urgent threat to our forests,” Lovett said. “By decimating an entire species of tree, the ecological and economic impacts can be enormous.”

Lovett said his group’s progress in turning their recommendations into policies “is slow.”

“We hope a new administration might be more receptive,” he said.

On the state level, “DEC and our partners will continue our significant investments in finding strategies that mitigate and address invasive species in our environment and raise public awareness so that all New Yorkers can take part in helping to protect the Adirondacks and our entire state,” said Environmental Conservation Commissioner Basil Seggos.

Locally, Jamie Brown noted, the Lake George Land Conservancy is working with conservation organizations and municipalities within the Lake George watershed to prevent the spread of EAB.