Elkanah Watson, George Perkins Marsh and the Making of the Adirondack Landscape

The “mania” for Merino sheep could have turned the Champlain Valley and the eastern slopes of the Adirondacks into a desert; fortunately, the fever quickly passed 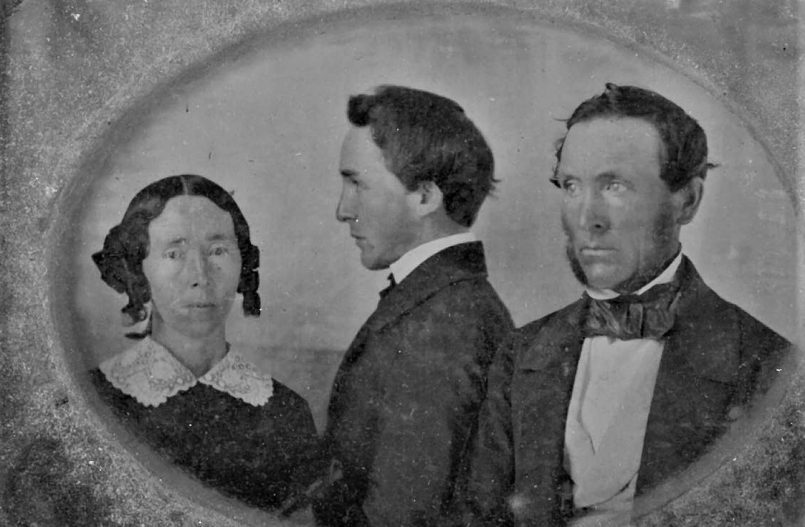 William Cook, the foremost breeder of Merino sheep on the New York side of Lake Champlain, with his wife Merrett and son Flavius Joseph. Photo courtesy of Ticonderoga Historical Society.
By Anthony F. Hall

The year that Merino sheep were first introduced to the Lake Champlain and Lake George areas, George Perkins Marsh, the pioneering conservationist, looked out from his home in Vermont across Lake Champlain to the Adirondacks.

Vermonters, he knew, had rushed to breed Merino sheep, which, like an invasive species, crowded practically every other agricultural animal and activity out of its way.  Deforestation, overgrazing, cycles of flood and drought, not to mention the hollowing out of Vermont’s farms and towns, ensued.

“For years, Marsh had been personally observing that the mountains in Vermont were losing their forest cover with terrible consequences for lowland valleys, and he argued for protecting the remaining forests,” writes Adirondack historian Phil Terrie.

The Adirondacks would suffer a similar fate if preventive actions were not taken before it was too late.

How the Cooks Brought Merino Sheep from Vermont

Thanks to the Ticonderoga Historical Society and its curators, William Dolback and Diane Collins, we  are learning more about how Merino sheep came  to the Trout Brook Valley.  They’ve created an exhibit at the society’s Hancock House museum to help tell the story.

William H. Cook, the long suffering father of the over-educated and profligate Flavius Joseph Cook, was among the first to breed Merino sheep in Ticonderoga and, in fact, the whole of the Champlain Valley.

In 1851, William H. Cook’s wife, Merrett (originally from Hague) wrote to her son that “Pa went to Vermont to buy sheep… they call them the merino pure blood …”

At the time, according to Joseph Cook, Vermont was considered the best wool state in the Union.

“We are indebted to Shoreham and Orwell (communities opposite Ticonderoga on the Vermont side of Lake Champlain) for the origin and improvement in our stock,” Joseph Cook wrote.

His father purchased his first Merinos in Shoreham “and began to disseminate the stock to his neighbors (and) the fever for improvement (in sheep stock) spread rapidly,” wrote Cook.

Within a few years, the industry was so wide-spread in Ticonderoga that farmers held competitive sheep shearings. The heaviest fleeces were clipped from the flocks of William H. Cook.

According to Bill Dolback, the wool was processed in mills along the LaChute River in Ticonderoga.

The Merinos Come to America

William Jervis, Thomas Jefferson’s consul in Spain from 1802 to 1811, is usually credited (or blamed) for launching the craze for Merino sheep.

He is said to have started exporting Merino sheep to the United States in 1809.

Actually, it appears that Chancellor Robert Livingston “who took a serious delight in husbandry,” according to his biographer, and who sought a more productive use for his Hudson Valley estates after decades of planting grain, imported the first Merino sheep to America in 1802.

A pair of animals imported by Livingston were bought by Elkanah Watson, who more than any other single individual, can be held responsible for turning the breeding of Merino sheep into an industry.

A New Englander by birth who later settled in upstate New York, Watson was one of the earliest landowners in Bolton. Elkanah Watson, Gardner Finley wrote in his pamphlet commemorating the 175th anniversary of the founding of Bolton, purchased a portion of the property owned by his friend and business partner Jeremiah Van Rensselaer in 1800. He built a sawmill on Huddle Brook (which, well into the 19th century, was known as Watson’s Mill Brook) and, in fact, owned much of the land around Huddle Bay.

In the autumn of 1807, Elkanah Watson displayed his pair of Merino sheep under an elm tree in the public square of Pittsfield, Massachusetts.

(That event, by the way, is celebrated today as the origin of our county fairs. “I reasoned thus,” Watson wrote, “if two animals are capable of exciting so much attention, what would be the effect of a display on a larger scale of different animals.” Watson established the Berkshire Agricultural Society to sponsor his agricultural fairs, and the first official one, held in 1811, was, he said, “as splendid, novel and imposing as anything ever exhibited in America.”)

Following his 1807 display of Merino sheep, “I addressed the farmers of Berkshire, with a view to the spread of Merino sheep, which I considered invaluable in the hilly districts of New England,” Watson wrote.

According to Watson himself, the spread of Merino sheep gave rise to the woolen mills of New England and new economic opportunities for its inhabitants.

As the demand for wool grew, New England farmers “stopped growing wheat and grain and started raising the Spanish sheep. They cut down thousands of acres of trees because the sheep needed the land for grazing,” the New England Historical Society notes.

With the outbreak of the Civil War, and the pressing need for wool for to supply the Union armies, farmers turned their hills over to Merino sheep once again.

From Wilderness to Agriculture

In 1801, when Watson first visited Lake George, the area was still, more or less, a wilderness, as  he notes in this passage from his diary: “Upon debouching from the forest, this lovely lake with its innumerable islands suddenly burst upon our view, revealed in all its exceedingly romantic beauty. The lake, enveloped on both shores by a mountain, which, on the east side, ascends into bold and lofty eminences, reposed in a long, deep gorge, its placid and unruffled waters studded with isles, whose rocky and rugged margin shelved down to the water’s edge.”

A year later, the Mohican House was built on Bolton’s shore– presumably to lodge speculators like Watson and new migrants; there were as yet no tourists to entertain. Steamboats would not arrive until 1817.

Bolton’s population began to grow, doubling in size between 1810 and 1830, and increasing even faster after the Civil War.

Having wreaked havoc on the hill farms of New England, families moved west, to the Town of Bolton, among other places. (Bolton’s Lamb family, for instance, is from Shoreham.)

Rather than learning from experience – that a sustainable use of the land requires prudence and long-term planning – the Vermonters appeared to have brought their sheep and sheep raising practices with them.

By the 1820s, Ulysses Prentiss Hedrick notes in “A History of Agriculture in New York State,” prices for fine wool were so high that “some New York farmers turned all their land into sheep pastures.”

Although the deforested landscapes painted, etched and drawn in Bolton Landing in the mid to late 19th century suggest that an environmental disaster is about to occur,  the raising of sheep declined before such a thing could occur.

“Following Chancellor Livingston’s importation of Merino sheep in 1802, a mania to stock up with Merinos took possession of the public and lasted until fancy prices dwindled and mismanagement upset the speculation spree.” Hedrick writes.

He adds that “competition from the west became keener, and New York farmers began to cut down the size of their flocks and to go into dairying.”

George Perkins Marsh and the Making of the Adirondack Park

In 1864, George Perkins Marsh published his “Man and Nature,” the book that author and activist Bill McKibben regards as “the first major work of scientific environmentalism in American history.”

As one historian of environmentalism writes, “Marsh observed in dismay as Vermont farmers…overcut their forests for timber and overgraze their hilly meadows. Treeless mountains baked in the sun and eroded in the rain. Fish died as clear streams turned muddy.”

Like the rocky hills of New England, the Adirondacks would face a “widespread desolation” if the region was deforested, Marsh wrote.

As early as the 1860s, he noted, “the rivers flow with diminished currents in dry seasons, and with augmented volumes of water after heavy rains. They bring down much larger quantities of sediment, and the increasing

commerce of the important towns on the upper waters of that river.”

An 1884 edition of the book notes, “the forests of the Adirondacks have continued to be the scene of ever more and more encroaching inroads… “

Marsh’s warnings did not fall upon deaf ears. The great Adirondack surveyor Verplanck Colvin, forestry school founder Franklin B. Hough and New York State legislators and governors all learned from Marsh and leaned upon him in the years leading up to the creation of the Adirondack Park.

“Marsh’s insights (that humans could do profound damage to the natural world) led directly to the protection of New York’s vast Adirondack Park and indirectly to the creation of a system of national parks and preserves,” writes Bill McKibben.

Did the early alarms raised by the “mania” for Merino sheep in the Champlain Valley and in the hills above Lake George have the unintended consequence of creating the Adirondack Park and the modern environmental ethic? They certainly helped.