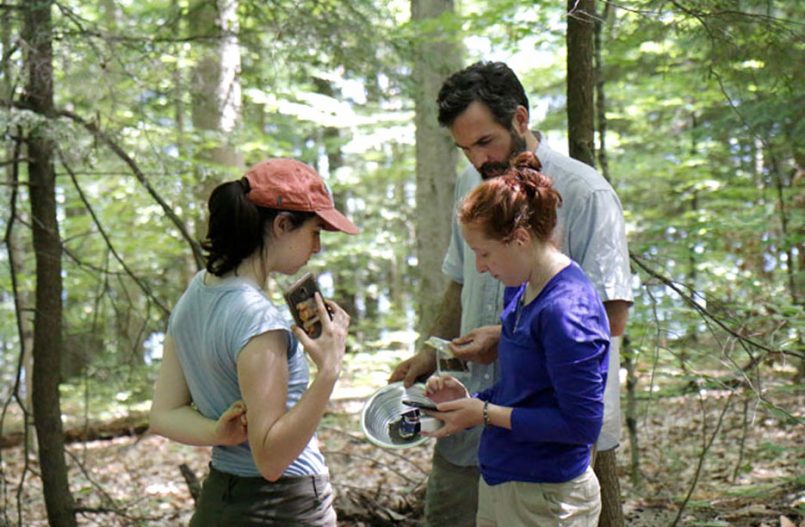 Scarcely interrupted  by man’s exertions since the 19th century, Dome Island’s natural evolution  has functioned as a wilderness laboratory since the early 1960s, shortly after it was donated to the Nature Conservancy by the legendary John Apperson.

With the discovery of Hemlock Wooly Adelgid on the island in October, studies now underway will not only advance important research about forests, soils and bird life, climate change and ambient air pollution, but, scientists and environmentalists hope,  help control the invasive pest throughout the northeast.

Dr. Kris Covey, a part-time resident of Bolton Landing and Visiting Assistant Professor of Environmental Studies and Sciences at Skidmore College, is leading a multi-dimensional,  two year study of the island.

According to the Nature Conservancy, Covey’s analysis of Dome Island’s soils and their relationships to its plant and tree species will expand to include a study of what, if any, effect  insecticides may have on the soils surrounding hemlocks treated for HWA.

Covey and his students will also map every tree over 10 inches in diameter on the island with unprecedented accuracy and precision. (Hemlocks are believed to constitute roughly 60% of Dome Island’s nearly 4,000 trees.)

“And we’ve built a model for estimating the age of every tree on the island as well,” said Covey.  “That will tell us something about the island’s historical disturbances, natural and otherwise.”

Covey’s studies, which build upon previous research, will provide the most detailed look at the island’s forest cover yet.

Dr. Mark Whitmore, an entomologist at  New York State Hemlock Initiative at Cornell University, will conduct his own research on the island.

“The unfortunate discovery of HWA on Dome Island has reinforced the importance of research to study how it spreads,” a prepared statement from the Nature Conservancy quoted Whitmore, who was on the island when HWA was found on October 8.

Whitmore said he and others participating in that survey “first spotted the HWA at ground level, on the the island’s south end; a handful of trees were infested, some heavily. It struck me then that here was the perfect opportunity to research, in a relatively confined environment,  how HWA spreads.”

Not long after the October 8 discovery, Whitmore and a crew of four technicians began collecting samples of foliage from 16 trees at three different heights.

“Our tree canopy sampling will generate a snapshot of HWA distribution now and in the future. It will also allow us to carefully evaluate the efficacy of insecticide treatments,” said Whitmore.

Whitmore and his researchers will also test techniques for catching  rain water falling from the forest canopy,  which will be analyzed for the presence of the insect’s DNA.

“On Dome Island, we’ll  do our first real test of how DNA can be used to detect HWA,” said Whitmore.

Whitmore, who founded  a $1.2 million laboratory at Cornell University to research HWA, added, “I’ve never been presented with an opportunity like this to work in a confined space where we have ‘point source intelligence’or knowledge of where the infestation started,  and the chance  to see how HWA spreads.”

Whitmore added, “My theory is that HWA spreads on the wind,  and the top of the canopy is hit first. And then over time, the bugs drop to the lower branches. But that has yet to be proved.”

Whitmore’s lab at Cornell is developing biological controls, or natural predators, to suppress HWA populations and ensure the survival of eastern hemlock populations.

Those, however, will not be released on Dome Island, for the simple reason that insecticides are expected to kill the HWA that the lab-raised beetles and flies prey upon.

According to the Dome Island Committee, comprising local residents and created  to advise the Nature Conservancy when the organization accepted the donation, Whitmore and Kovey are “carrying on the traditions inaugurated by John Apperson, who wanted the island be preserved in its natural state so that it could be used for scientific and educational  purposes.”

Apperson first acquired property on Lake George in 1918, when he bought a parcel on Tongue Mountain so that he would have a place to store his boats and where he built a rough shelter.

During those first years on Lake George, Apperson heard became that a developer was planning to build a hotel on Dome Island.  With the financial support of William K. Bixby, of Bolton Landing, and Dr. Irving Langmuir, the GE scientists who later won a Nobel Prize, Apperson purchased Dome Island.

The first survey of Dome Island’s trees was conducted by James Shelly in 1961.

In 1973, the Dome Island committee asked Alvin Breisch to resample and expand upon Shelly’s surveys.

More recent studies have examined beech blight and the island’s glacial till – the soil, pebbles and boulders  laid down by the great ice sheet that created the island.

Perhaps the study with the greatest impact to date was one conducted between 2006 and 2011, documenting the high levels of mercury found in wildlife species in the region, Lake George included.

The study found that mercury concentrations in songbirds from Dome Island ranked among the highest in the state.

“No one expected to find mercury pollution at these levels on Lake George,” said Henry Caldwell, the chairman of the Dome Island Committee.

That study was funded in part with income from an endowment established by friends  of John Apperson  in 1954.  The creation of an endowment  large enough  to maintain and preserve the island in its natural state  was a condition  Apperson  attached to his offer to donate  the island to the Nature Conservancy.

That endowment has funded much of the scientific research on the island and, according to the Nature Conservancy, will provide the funds needed to treat the island’s HWA infested hemlocks with insecticides.